Making a worthy sequel to whats generally considered one of the greatest games of all time can be a tricky, if not downright impossible, proposition; and for Nintendo, fashioning a proper successor to Super Mario 64 took more than one attempt. After all, when youre crafting the follow-up to a groundbreaking title that simultaneously pioneered and perfected an entire genre, its natural for audience expectations to be immeasurably high, perhaps impossibly so.

Nintendos first effort, Super Mario Sunshine, overflowed with a sense of unapologetic creativity and experimentation unseen in the Mario franchise since Yoshis Island?; but, in being so unorthodox, the plumbers tropical romp strayed too far from the Mario formulas fundamentals. Sunshine certainly didnt deserve to be so maligned during those unfriendly days of the last console generation, but after Super Mario Galaxy arrived in late 2007, beaming with the same sort of brilliance seen over a decade ago on the N64, it suddenly became clear what a Mario 64 sequel should be -- and Super Mario Galaxy was it.

But to argue for Galaxys place as the perfect Mario 64 sequel, its first necessary to discuss why Sunshine wasnt up to snuff -- and contrary to popular belief, Marios fancy new water pack isnt the fatal flaw here. Forcing Mario to stop and spray water from a fixed perspective may have interfered with the franchises effortless, nonstop running and jumping, but it's Sunshines atypically unfocused nature that really makes the game suffer. Many of the Sunshines tasks involve getting from point A to point B in a rambling, sprawling level full of tricky jumps which seem far less prescribed thanks to Marios ability to briefly hover with the power of FLUDD. The game presents some interesting set pieces here and there, but the entire experience feels uncharacteristically sloppy for a Mario game -- which may be why the packless stages and their explicit jumping puzzles seem to be the most memorable moments of Sunshine, next to those infuriating instances when a mistimed hover or a disgruntled camera meddles with that last leap to a precarious platform it took half an hour to reach. It doesnt take a genius to realize that guesswork has no place in a series usually designed to be a carefully-planned exercise in platforming skills. 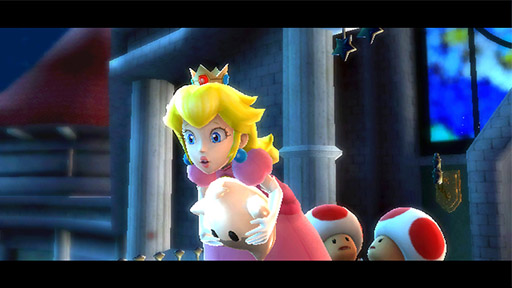 Thankfully, the geniuses behind the quirky Donkey Kong: Jungle Beat came to Mario's rescue five years later by delivering an experience that outdoes even Mario 64s attempt to adapt the 2D Mario formula into the third dimension. Super Mario Galaxy has often been compared to the legendary Super Mario Bros. 3, and with good reason; the greatness of these two games stems from their similar design philosophy. Both SMB3 and Galaxy feature short, incredibly-focused levels that each offer up unique challenges and content -- and Galaxy in particular does a great job of supplying a variety of gameplay styles while simultaneously giving the player a choice as to which goal should be tackled next. If you happen to grow frustrated with a certain level, Galaxy always offers a completely-different alternative for those frazzled by the task at hand. Yes, as you complete more of the game, these alternatives start to shrink in number, but Galaxys design allows the player to dabble in any number of different play styles until theyre comfortable with the requirements of the tougher challenges.

The focused nature of Super Mario Galaxy even extends to the games power-ups, which shake their literal meaning in their new role as tools necessary to complete specific tasks. Even more so than Mario 64, the power-ups of Galaxy fit snugly into the games strictly-defined universe -- and a few of the games "power-ups" actually make Mario weaker or harder to control. In Galaxy, youll never find a power-up haphazardly placed for the sake of a simple reward; each one is specifically planted in a level to indicate how a player must reach the goal, and to give them the means by which to reach it. All of this premeditated planning could make Mario Galaxy a very on-rails experience, but youre always given a certain amount of breathing room to work with -- including alternate pathways and routes to secret areas -- while wandering through its tightly-packed levels. Super Mario Galaxy can be considered the Half-Life 2 of 3D platformers, with the benefit of not having to suffer through those tedious vehicle sections... though steering a manta ray into a bottomless pit for the hundredth time thanks to touchy motion controls can be just as annoying. 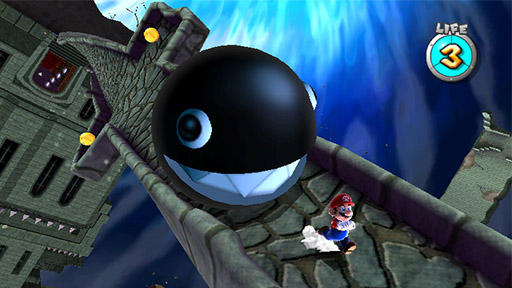 Super Mario Galaxys adherence to the old-school Mario formula does result in a few problems, though; the classic "lives" system doesnt make a lick of sense in a modern 3D platformer where between-level progress can be saved at any moment. Galaxy also features its share of the same tedious collecting levels seen in both Mario 64 and Sunshine, though Nintendo smartly relegates this Rare-ish turf to post-game content -- and finding 100 purple coins in an area is far more straightforward than Sunshines ambiguous blue coin hunt. But these few annoyances can safely be ignored, since the majority of Super Mario Galaxy is so magnificent. Given the self-control Nintendo showed in not reiterating the same kinds of levels over and over, after finishing Galaxy, you get the feeling theres a still potential left for the games gravity-flipping cornucopia of content. Thank God for sequels, eh?