When Final Fantasy XII was leaked to the Internet a couple months ahead of its release, I downloaded it and burned a copy. I avoid piracy as a rule, but that day, with the files so tantalizingly within reach, I could wait no longer. I burned the game onto a DVD-ROM and started playing.

After adventuring for a few hours -- I got as far as the Barheim Passage, clearing its infestation of Battery Mimics and defeating the impressively gigantic Mimic Queen -- I couldn't bear to keep playing such a masterpiece on stolen time.

I took the disc out of my PS2, snapped it in half, and threw it in the garbage. Then I deleted the files off my computer and used a randomizer to make sure the data could never be recovered. And then I waited, and when the game was finally released for real I picked up where I'd left off and kept going until, after 80 hours of play, I defeated the last boss the day after Christmas.

I had just gone through the best Final Fantasy game I'd ever playedbetter even than my personal gold standard of Final Fantasy VI -- and I'd done it without pushing the X button more times than was absolutely necessary, thanks to the wonderfully realized Gambit system. Final Fantasy VI was my favorite game for a decade because I loved getting to know its characters, taking in its stories, and making my way through its world more than I did any other. Final Fantasy XII is my favorite now for the same reasons.

It's the grown-ups -- Basch and Ashe, around whom the plot revolves, and Balthier and Fran, who provide a dose of dry humor when needed and a lot of cool the rest of the time -- who make the game. I could play a dozen games with Balthier as the leading man, and Fran manages to be a credible badass even with a ridiculous metal thong up her butt. Basch and Ashe hold up the serious end of the tale. But that Vaan kid and his little girlfriend Penelo can pretty much take a hike.

The setting is Ivalice, Square Enix's best-realized and most interesting world -- a place so large that the vast, interconnected sprawl of deserts, cities, ruins, mountains, and plains the player explores over the course of the game is just a small part of the wholea whole that is hinted at in this and other games, but never fully revealed. There are many more tales to tell in Ivalice, if Square Enix is willing to do so. Some have compared Ivalice's mixtures of science and magic, and its blending of humans and fantastical races, to George Lucas's Star Wars universe, and the comparison is not wrong. Even the plot of FFXII holds many similarities to Lucas' original space opera, with a small band of rebels fighting back against an overbearing empire that controls an overwhelming military and possesses a devastating superweapon. 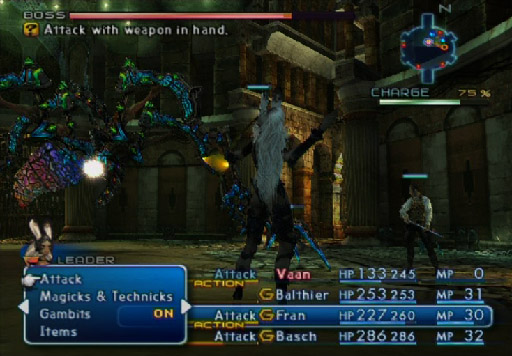 But while Final Fantasy XII may indeed be Square Enix's Star Wars, it's a bizarro Star Wars where Obi-Wan Kenobi (Cid! As a villain!) is the Emperor's right-hand scientist as well as Han Solo's father; Darth Vader is twin brother to a gruff, disillusioned Luke Skywalker (Basch); and Chewbacca is a rabbit girl in high heels (Fran); where Princess Leia (Ashe) is a pissed-off warrior out to take back her throne and avenge her dead husband; and where the Emperor himself is less a tyrannical despot than a misguided visionary influenced by a member of an inscrutable race that has pulled the strings of mankind's existence for centuries. Despite the emphasis on Vaan in pre-release information and his status as the group representative in towns, his diminished presence on the box art tells the true tale. He and Penelo are R2-D2 and C-3PO -- present for nearly all events, participating in many of them, but not really crucial to the goings-on outside of simply being there. Aside from the death of his brother being tied into the main plot line, the game really isn't about Vaan at all, and even less about Peneloshe's the last permanent party member, and spends a good portion of the early part of the game imprisoned.

No, the plot here centers on the disgraced, long-imprisoned Basch and the vengeful Princess Ashe of Dalmasca, the tiny conquered kingdom that the empire now holds in sway. Most of the game is given over to the party's attempts to undermine the empire's plans by slicing off a chunk of a powerful artifact that will grant Ashe the power to unite the region under her rule, as her ancient ancestor did -- a destiny that she casts aside at the crucial moment after learning the price of its fulfillment, opting instead to take her kingdom's future into her own hands. But it's clear at the end of the game that, despite ending the Emperor's military ambitions, the plans of the renegade Occuria, Venat, who guided him and Dr. Cid in their efforts have, in fact, succeeded -- mankind's future is out of the control of the other Occuria, which was the true "villain's" goal all along. The final battle is almost a formality, though your victory is hardly a hollow onedefeating the fusion of Venat and Vayne puts an end to the Emperor's plans to go to war with the rival Rozarrian Empire and frees the downtrodden kingdom of Dalmasca, which was the party's goal all along. Even the Vader stand-in, Gabranth, earns his redemption, reconciling with his brother Basch and passing along his mantle.

The characters and story are just part of what makes the game so compelling. The gameplay incorporates the advantages of a massively multiplayer online RPG -- a truly vast world, seamless battles and quasi-real-time combatwhile dropping most of the disadvantagesgrinding for grinding's sake, subscription fees and, perhaps most importantly, other people. Not that people are all bad. But there's no easier way to bring my enjoyment of an online game skidding to a halt than to end up with a bad group, or, almost as bad, no group at all. I've built up a World of Warcraft character to level 30 or so three separate times, and all three times I've run into the same wall: At some point I'm no longer strong enough to effectively play solo without mastering the game's math, but don't have the time or patience to seek out a group to adventure with and progress further. In FFXII I never have to wait around for 90 minutes in the same city while the group I'm trying to organize a raid with trickles in from their real lives. It's like an MMORPG without the MO. 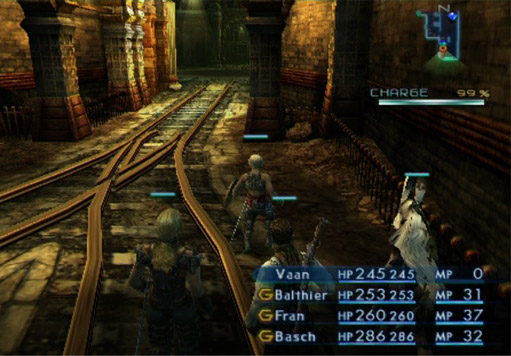 The free-range combat and wide-open world aren't the only features the game lifts from MMORPGs. Random treasure pots litter each area, much like the regenerating chests in World of Warcraft. And most monsters drop "vendor trash" junk loot that's good only for selling. This is the game's chief method for producing Gil, as monsters generally don't drop that anymore, though here it has a further use -- selling enough of it in certain combinations to merchants makes new items available, a system later picked up and fleshed out in Final Fantasy Tactics A2: Grimoire of the Rift.

Finally, there's the somewhat controversial subject of Gambits, FFXII's system for streamlining combat and allowing players to program in a set of commands that characters will carry out under the right conditions. Some people think these dumb down the game. There was a Penny Arcade comic mocking the concept, envisioning a Super Mario Bros. in which players don't even have to touch the controller, simply allowing the computer to play the game for them. But that's not really what Gambits dothey don't take the control out of my hands, they just allow me to adjust my priorities.

When playing, say, Final Fantasy VII, a battle tends to go like this: I select the fight command and target enemies with it until they die, unless I decide to do something else, such as heal a party member who's in the danger zone, clear a status effect or hit a group of monsters with the fire spell they're weak against. In mechanical terms it means I press the O button a lot, with occasional breaks to dig further down into the menu system for a spell or item. But those mechanics aside, the core of this style of combat is the strategywhat you go into the fight expecting to doand tacticshow you adapt on the fly when your strategy hits a snag.

Gambits don't remove the strategy or the tactics, they simply save you a ton of extraneous button presses that you would be making if this were another game. Most battles in RPGs boil down to pushing the confirm button over and over and over, with occasional interludes to move the cursor or cancel a selection. Gambits remove these superfluous button presses while allowing you to jump in and give more surgical commands whenever you feel it necessary. Nothing is lost in simplifying and streamlining the process because the combat isn't skill-based in the way a first-person shooter's would be -- you're still making the decisions about what your party members will do in a given situation, but for the most part you're making them before they ever go into battle.

The Gambit system isn't flawless. You can't save multiple Gambit lineups for each character, which would be a terrific time-saving measure -- rejiggering your Gambit lineup by hand for a new boss fight gets tedious, and it's even worse when you want to restore your standard setup afterward. The Gambit options you're given toward the start of the game are pretty simple and nonspecific -- you can't direct a character to target foes weak to fire until much later in the game. This is OK on the first trip through, when you're coming to grips with the system, but when starting over it's really a hindrance -- being allowed you to keep your purchased Gambits when starting a new game would be perfect.

But as it stands, the game is nearly perfectand that's as good as any game can hope for.