When the curtain came down on the year 1999, no one would have guessed that the curtain was closing for space combat simulators as well. After all, gamers were still basking in the glow of X-Wing Alliance and Freespace 2, two of the genres finest entries to that point. Technology was advancing, online multiplayer was steadily improving, and the sky seemed to be the limit.

But once the new century dawned, there was nothing. No more Wing Commander, X-Wing, or Freespace -- the big three of space combat simulators. Fans of the genre were forced to subsist on scraps like Wing Commander Arena and Freelancer, always hoping that someone would rescue Freespace from the scrap heap, or that LucasArts would stop making Star Wars Episode One podracing games and resurrect one of their most popular franchises. Imagine what would have happened to the platformer genre if it had gone a decade without a new Super Mario Bros.: Dead on arrival.

The end of the glory days arrived almost exactly ten years after the genre had won mainstream acceptance thanks to Wing Commander and its landmark cinematics. Elite had laid down the initial groundwork, but Wing Commander had truly captured every nerds dream of piloting a star fighter with its advanced graphics and gameplay. Three years later, Lawrence Holland and LucasArts gave us X-Wing, bringing the genre to its heyday. These two franchises would be at the forefront of PC gaming for the following decade, maintaining the genres standing even in the face of the advent of real-time strategy games and first-person shooters.

Both franchises offered numerous innovations. Wing Commander was best known for its ever-evolving cinema, but the spinoff Privateer was much loved for its open-ended exploration. The X-Wing games adopted the tight gameplay mechanics of acclaimed flight sims like Hollands own Secret Weapons of the Luftwaffe, but more interesting for Star Wars fans was the fact that it drew heavily from the newly-established Expanded Universe. In an era in which Star Wars had yet to saturate the market to the point of nausea, having the opportunity to fly alongside popular latter-day characters like Grand Admiral Thrawn was an unrivaled geekgasm for hardcore fans of the series relatively esoteric extensions. For everyone else though, it was good fun to become Luke Skywalker in the cockpit of an X-Wing fighter.

The X-Wing games were also innovators of online gaming. X-Wing vs. Tie Fighter arguably arrived ten years ahead of its time with its emphasis on multiplayer cooperative play in an era where simple online deathmatches were still embryonic at best. Eight-player co-op wasnt easily feasible when the average player was lucky to have a 28.8 modem, but the games LAN experience was unmatched. Many fans still play X-Wing vs. TIE Fighter to this day on custom servers like Errant Venture.

In 1998, Interplay decided to leap in with the confusingly named Descent: Freespace. The name was a curious marketing ploy, considering that Descent was a niche series that played like a corridor-based first-person shooter on three axes, offering only the faint whiff of crossover appeal for space combat fans. But it came at a perfect time, arriving on the heels of the disappointing Wing Commander: Prophecy, which marked EAs attempt to relaunch the series without the input of creator Chris Roberts. Freespace received enough positive word-of-mouth to warrant a sequel, which would be released the following year.

The release of Freespace 2 alongside X-Wing Alliance was part of a confluence of events that would ultimately mark the end of what had been one of the preeminent genres of the 1990s. Roberts had long since left Origin, leaving the series dead in the water after the lukewarm reception given Wing Commander: Prophecy. Interplay was in the process of hemorrhaging money, and X-Wing Alliance marked the end of a trilogy. The stage was set for the genres demise.

At least it went out with a bang. Freespace 2 was a massive improvement over the first game, arguably representing the space shooters pinnacle. With its outstanding visuals and emphasis on capital ship battles, it managed to make players feel like a tiny speck in a much large battle like no other space combat title before or since. Unfortunately, it sold somewhat poorly, which prompted Interplay to yank funding for any more expansion packs or sequels. As a result, the story remains frustratingly incomplete, with many loose threads that will likely never be tied up. THQ purchased Volition a year later, leaving the rights to Interplay and ending any hope of a sequel.

X-Wing Alliance was likewise left incomplete, despite ostensibly marking the end of the trilogy. Lawrence Holland and company had sought to add a new angle to Alliance, creating a side story revolving around a family of independent contractors (read: smugglers) who are forced to join the rebellion. As Ace Azzameen, the player would periodically be called away on family business, which mostly meant having the chance to fly a Corellian Transport. The main storyline was resolved with the Battle of Endor, but the fate of the Azzameen family ended on an unresolved cliffhanger.

The end of Wing Commander, Freespace and X-Wing marked the end of an era. Soaring development costs made it impossible to create a profitable space combat simulator, particularly in light the shrinking appeal of PC gaming. Attempts to revitalize the genre with new franchises like Freelancer met with failure, and projects like the space combat game based on Babylon 5 were quietly canceled. The most notable games to come out of that era were the hardcore Independence War 2: Edge of Chaos and the massively multiplayer Jumpgate Online, both of which had their fans but were ultimately niche titles. In terms of official support, the genre had cornered itself in a dead end.

The genres one saving grace was the open nature of the PC platform. Thriving communities soon coalesced around many of the genres most popular games. Unable to develop a true sequel, Volition released Freespace 2s source code, which became the basis of multiple fan projects. Alliance multiplayer remained popular through the Errant Venture service, and fan groups like the X-Wing Alliance Upgrade Project would contribute improved graphics and hundreds of custom missions for other fans to enjoy. Even Freelancer has somehow managed to remain alive and well, thanks in large part to the obligatory Star Wars mods that have emerged over the years.

Despite the nostalgic appeal and vocal support commanded by Wing Commander and X-Wing, Electronic Arts (who purchased Origin) and LucasArts have steadfastly refused to produce any new entries in either series. EA made a half-hearted attempt to revive Wing Commander with Arena for Xbox Live Arcade, but it was roundly criticized for being more of an arcade shooter than a space combat game. LucasArts has occasionally hinted at an X-Wing revival, but they have yet to even port the series to Steam with the rest of their back catalog. 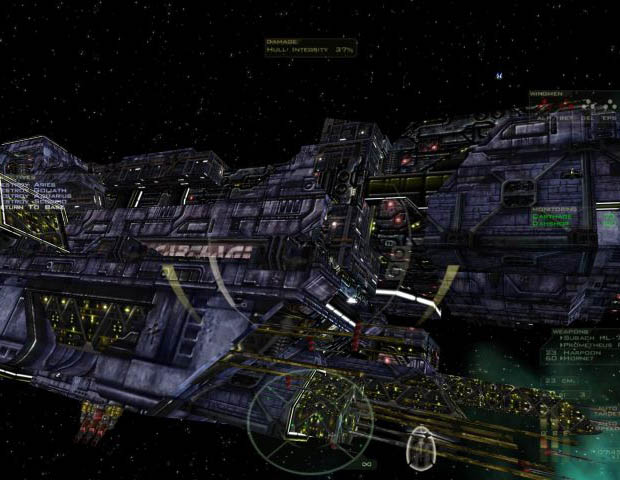 The most logical platform for a revival of either series would either be on the Xbox 360 or the PlayStation 3. Its easy to imagine an eight- (or sixteen-) player space shooter on Xbox Live Arcade, finally making good on the promise of X-Wing vs. TIE Fighter from more than a decade ago. Considering that even adventure games have somehow managed to find a niche, its incredible to think that franchises as beloved as Wing Commander and X-Wing have somehow failed to pick up sequels in the intervening years.

The genres glory days are long over, but that doesnt preclude a rebirth. Fans still harbor hope that someday soon well again be vaporizing TIE Fighters and Kilrathi.