We didn't know it at the time, and in fact most gamers poo-poohed the game for looking so archaic. You can thank Konami's standard incompetent handling of the series in the U.S. for that one: released a mere week before Final Fantasy VIII, Suikoden II might as well have been stood against the wall and shot for all that it was eclipsed by hype -- and that's to say nothing of the concurrent Dreamcast launch! On one hand, we had the gorgeous-looking follow-up to what was pretty much the most successful game of the generation; on the other, the humble sequel to a modest adventure that predated the FFVII RPG goldrush by a full year. One pushed the boundaries of audio, visuals, and integration of cinematic narrative with gameplay. The other had a lot of tiny sprites in a fixed, top-down world of brown. There was no contest as to which would succeed and which would languish on the shelves.

Yet while I'll defend FFVIII to the death as the single most ambitious and inventive RPG of its generation, to me there's no question as to which is ultimately the better game. FFVIII's forward-thinking design was admirable, and even moreso its refusal to rest on its predecessor's laurels. But it didn't just break the rules of RPGs, it also broke itself. It's a mad, experimental masterpiece of avant-garde design and devil-may-care innovation that's equal parts incredible and unplayable. Suikoden II, on the other hand, simply took everything good about the classic Japanese RPG, shucked away all the flaws and frustrations, and presented a powerful tale of friendship, betrayal, and moral dilemmas through a theatre of lovingly crafted spritework. FFVIII was the hip and daring stadium rock anthem infused with progressive and techno influences that was painfully dissonant yet sounded like nothing anyone had ever heard before. Suikoden II was a simple folk ballad that captured the essence of the human condition and moved its audience to tears with nothing more than lilting words and acoustic guitar. A decade later, the truth will out: Time dulls the cutting edge, but piercing sincerity forever cuts to the heart. 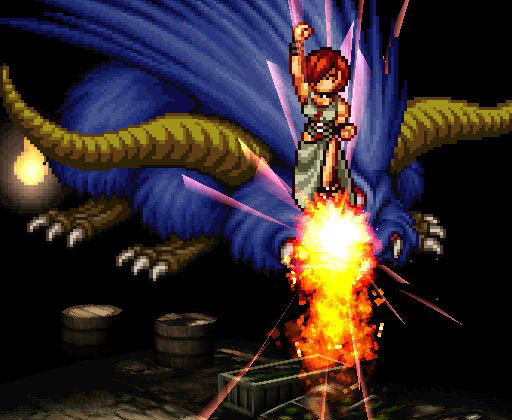 There'll never be another RPG like this Suikoden; it marked the last time a major developer would treat the traditional 2D RPG format with the full respect and resources of a big-budget release. Future hand-drawn role-playing efforts would either be deliberately iconoclastic (a la Valkyrie Profile?) or else low-budget productions built on a foundation of clichï¿½s and recycled assets. For this last old-school effort, though, Konami gave the format a grand send-off: The opening flashback montage that depicts the childhoods of the three main characters (Riou, Jowy, and Nanami) probably contains more unique character sprites than the entirety of most DS RPGs. And this is Suikoden, remember, which means there are 108 different recruitable characters alone... and at least as many other characters in the immense cast of distinct NPCs who populate the various cities and kingdoms of the game world. And they all look great.

Final Fantasy Tactics impressed attentive gamers with its cutscene sprite animations -- characters kneeling, grasping, punching, stabbing - but Suikoden II utterly eclipsed it. The tiny warriors of the game demonstrated remarkable personality, and such warmth. Even an unbelievably rushed and unedited localization couldn't diminish Nanami's likability, Viktor's hidden compassion, Jowy's reluctant betrayal, or Luca Blight's bestial brutality. For all the talk of bridging the uncanny valley, a decade of advances in 3D art still hasn't given us a cast as immense and endearing as Suikoden II's. It's not how realistic a character looks that makes them believable, it's how they move and what they do. Suikoden's characters moved with great purpose and did things both tremendous and minute.

The old-fashioned graphics weren't simply great for defining the cast, though; they also helped keep Suikoden II's pace snappy and engaging. RPGs of the 32-bit era were characterized by excessive loading times and over-the-top animations, but the PlayStation Suikodens parlayed their dated visuals into an advantage. Battles didn't need to load, so the random encounters started up instantly. The fixed camera angles allowed characters to act simultaneously without turning battles into a confusing mess. Towns and castles were quickly navigated, flashy battle animations were speedy and precise, and players were never confused about which parts of the backgrounds were actually pathways. For all their technological simplicity, though, the environments never looked cheap or mundane; every locale was packed with minuscule detail. 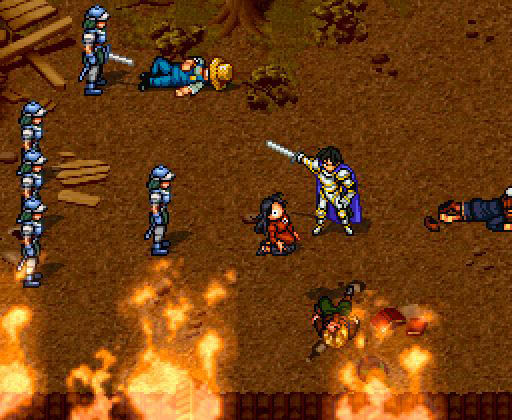 The best thing you can say about Suikoden II's technology is that unlike other PlayStation RPGs, it never got in the way. On the contrary, Konami's crew made the most of a deliberately minimalist design to present one of the largest, most involved RPG stories yet. Perhaps surprisingly for a game that looked so simple, Suikoden II was a truly epic tale spanning 40-50 hours of play timeï¿½brisk, load-free play time. Had the game taken the standard PlayStation 3D route, the story would almost certainly have cracked the 100-hour mark, and all without padding. Despite its length, Suikoden II had a lean, purposeful story that dodged the typical RPG clichï¿½s: The main villain was defeated at about the game's halfway mark, but the politics of the aftermath were just as important as the act of stopping a brutal murderer. The world didn't come to a halt or slip into an easy peace in the absence of the main antagonist, and in fact the aftermath is ultimately presented as an even more difficult reality to deal with than the psychopathic Blight. That being said, Blight was hardly a cinch; his last stand remains one of the most incredible battles ever designed. But after his defeat, the hero was presented with increasingly onerous demands and actually had an opportunity to sneak away and abandon his responsibilities -- and the game forced him to face the unfortunate consequences of his cowardice if he availed himself of the chance.

It was easy to shrug off Suikoden II at the time, because there was little outside the name to suggest it wasn't just another middling out-of-date hack job, and surely not the last we'd ever see of that sort of thing. In the cold light of retrospection, though, the folly of that apathy has become clear. Suikoden II wasn't another boring RPG; it was the ultimate evolution of more than a decade of console RPG heritage, the last, best example of an artform. Its story and characters transcended the limits of technology and the travails of slapdash localization to resonate with those who actually gave it a chance. Fortunately, as a game that arrived already dated, it's weathered the ravages of time far better than its contemporaries and plays just as exquisitely today as it did a decade ago.