A large part of the lasting appeal of Star Trek is voiced by the captain in the introductory monologue: To explore strange, new worlds. To seek out new life and new civilizations. To boldy go where no one has gone before. Now that humans have explored almost every surface of this planet, it holds few surprises. Thus, space is where people look to discover the unknown. This is the appeal of Star Control II. There are crazy aliens out there. There are vast planets teeming with life and valuable minerals. And there are alien artifacts of unspeakable power.

You start out alone. You have a star map, but none of the galaxy is explored. You start in our solar system, so the obvious action is to head to Earth. Do that and you eventually meet Commander Hayes, who, in the service of the story, gives you a nice tutorial on harvesting minerals and combat. After filling you in on what transpired (how the alliance to which humanity belonged basically lost the war), you're left to do what you want. Do you strip-mine solar systems in order to get resources to improve your ship? Do you check out the last known location of a former ally? Do you investigate rumors of an ancient civilization?

The original Star Control was basically Risk with battles that played out like Spacewar! You played one of two sides in a conflict (the Alliance or the Hierarchy) who had to take over planets, exploit their resources, build new ships and defeat the enemy. When two ships encountered each other, they would face off in a Spacewar!-like battle, complete with a planet or moon at the center exerting its gravitational pull. There were a dozen different ships in the game, each with its own unique acceleration, turn rate, and weapons. The combat was crisp and, for a game with so many vastly different types of ships, amazingly balanced. Star Control was a fun game, especially when battling against another person, but if the series had stayed there, it wouldn't have been remembered nearly as fondly.

Fortunately, Toys for Bob decided to base the sequel on Starflight. It isn't a surprise that they drew their inspiration from there. Star Control co-creator Paul Reiche III and Starflight lead designer Greg Johnson were friends. Both had helped with each others' previous games, including Reiche on Starflight II and Johnson on the original Star Control. When Star Control II entered development, Johnson helped out his friend by writing dialogue and providing the voice of the Utwig, among other things.

Starflight created a genre unto itself with very few titles following in its footsteps. While based on space trading games like Elite, Starflight fashioned itself after a space opera. It created a rich history for its universe with many different alien races that all had their own personalities, desires, and prejudices. While mining and combat were important elements of the game, conversation and diplomacy were key to gathering the information you needed in order to solve the galaxy's mysteries. There was an overarching story that you took part in as you explored the galaxy and several subplots and side stories weaved together throughout the game. Starflight and its sequel consumed my middle school years as I played it, notebook by my side. A friend and I would annoy others by discussing new information gleaned from aliens, curious fauna on different planets, best approaches to dealing with alien races, and ancient artifacts of great power. 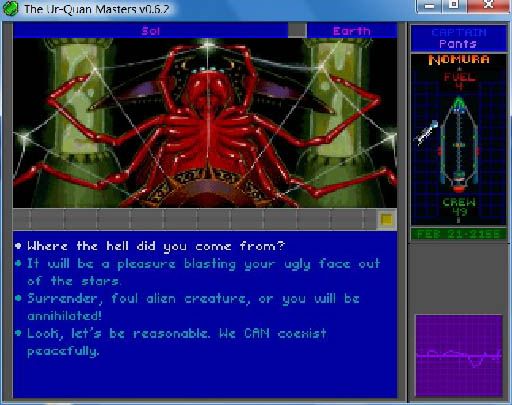 Star Control II took the great combat mechanics and multiple ships of the original game and merged it with Starflight's space exploration adventure. It vastly improved the interface, streamlining transitions from exploration to orbit to communication to combat. In addition, it created a universe where you could truly effect change, initiating a civil war or perhaps freeing an enslaved race.

Where the game really shines is in its writing. Star Control II spins a fine sci-fi yarn that brings together a recent war, an ancient conflict, and a really ancient race. It even manages to inspire some sympathy for the game's villains. The writers knew enough to show and not tell, and to only hint about the answers to the game's many mysteries, letting the player's imagination fill in the rest.

The original Star Control went out of its way to make each of the ships in the game unique, and its sequel does that for the alien captains behind those ships as well, with great character designs and memorable music. While it adopts the sci-fi trope in which each alien race has a shared personality, the aliens are so well-written that they don't come off as one-dimensional at all. The hours of dialogue, written over five months, show the influences of science fiction authors like Larry Niven, Orson Scott Card, Robert Heinlein, and David Brin, but perhaps most importantly, the influence of Douglas Adams, too. The conversations you have with aliens in the game are often hilarious and make the different species even more memorable. Everyone remembers the cowardly Spathi, the new age Pkunk, the depressed Utwig, and the not-quite-right Orz. 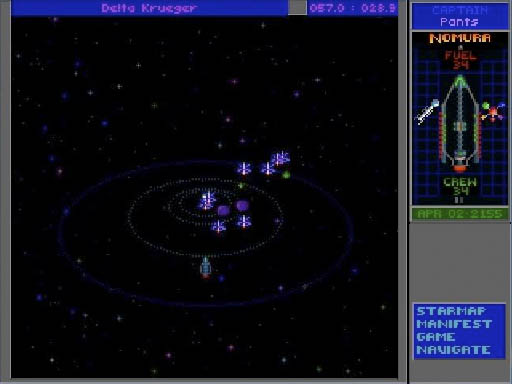 The only major criticism of Star Control II is that it has a hard time limit. Take too long to figure out how to defeat the Ur-Quan and they eliminate all life from the sector, including yours. Though modern game designers would not even consider this time limit, eliminating it would remove one of the most emotional moments of the game: the sense of dread from watching the ring representing the Kohr-Ah ships head to the spheres of influence of other alien races and slowly reduce them to nothing. Moreover, while there is definite frustration in having to repeat actions you've taken in your previous game, many things are just as pleasant to do the second time as the first. Despite having seen all the conversations before and knowing everything about the story and how to finish the game, that hasn't stopped me from replaying it fully three times. The dialogue in the game is so good and the combat sufficiently satisfying that it doesn't matter how many times you experience it. Much like a good book, it's worth experiencing again.

Star Control II is also blessed to be one of the few PC games that received a good console portmany would say better than the original game. Star Control II is considered one of the 3DO's best games (admittedly not a tough contest) and was fortunate in that the CD format was used not for FMV (outside of a few rendered cutscenes that were added) but rather to enhance the music and add some quality voice acting.

Star Control II doesn't fit neatly into a single genre. It has aspects of exploration, excavation, diplomacy, role-playing, adventure, and combat. It combines them all well, with an exciting combat engine and excellent writing. It practically broke the mold for games of its type as, aside from a disappointing sequel, the closest game to recreate its spirit is Bioware's Mass Effect, released 15 years later. Fortunately, the creators of Star Control II retained their rights to the game and released it as open source in 2002. By heading to http://sc2.sourceforge.net/ you can download the game that will have no trouble running on any modern computer. And it's totally worth it to learn the wonder of *Happy Campers*, Juffo-Wup, and Frungy. In Star Control II, you experience what it must be like to explore the final frontier.