What is evil? When we say, "Wow, thats evil," about some twisted act we hear of, what do we mean? Are we describing the act, are we ascribing some quality to the one who committed it, or are we expressing recognition of a thing that simply is? Silent Hill 2's willingness to face this question is what puts it on a higher level than its contemporaries. At their worst, like Blue Stinger, they're shlocky; at their best, like Resident Evil: Code Veronica, theyre scary. But only Silent Hill 2 is evil.

A bit of backstory here, because although it's not a direct sequel in the strictest sense, Silent Hill 2 does build on what came before. There are several possible endings to the original Silent Hill, but one common thread they share is that the demon Samael, worshipped by a cult in Silent Hill, does physically manifest after a failed attempt seven years earlier. In Silent Hill 2, Samaels emblem is visible in several places, particularly in a key scene near the very end of the game. Samael's freedom and the events of the first Silent Hill have turned the town, which was then only twisted by Alessa's projections, into an evil place. 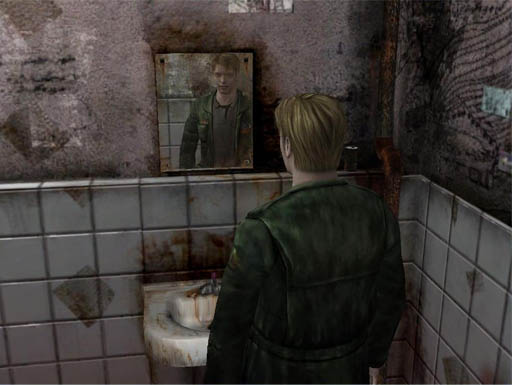 You can feel it when playing. Before going through the game again prior to writing this article, I'd only played it to completion once before, back in 2001... but I made many stabs at a second run through. What happened every time was that I'd go through the Blue Creek Apartments, follow Laura into Brookhaven Hospital, emerge back out into the nighttime streets... and stop there. The memory of what came next, at the Historical Society and below (and below, and below) was too harrowing. The whole second half is set in some of the most evil, oppressive, claustrophobic locales in all of gaming; I was struck again when I finally steeled myself to go through them a second time at how utterly wrong they feel. Every second I spent in there was a second I wanted to be out.

The environments are evil in ways large and small, aggressive and subtle. It's bad enough walking through the Labyrinth, the world seemingly creating itself from void as you go, but then you reach the room where Maria is waiting for you. As the scene is shot (particularly as it appeared, context-free, in the game's first trailers), it's unclear who the iron bars dividing the room are meant to be imprisoning... and in fact, Maria seems freer and more at ease on her side of the bars than James does on his. The personal hells revealed in the Lakeview Hotel, whether perpetually burning or rotting with mold and despair, almost pale in comparison to the banal evil in one of the games most frightening places: the ordinary, untouched, sun-drenched room 312.

Silent Hill is evil, but thats not what makes it interesting. It's an open question as to how much the town itself plays a part in events; James Sunderland, Angela Orosco, and Eddie Dumbrowski all find themselves drawn to the town, but whether the motive force is the town drawing them in or they themselves seeking out the town is left ambiguous. Maybe it doesn't matter, like asking whether it's the north or south pole that exerts the pull when two magnets fasten. 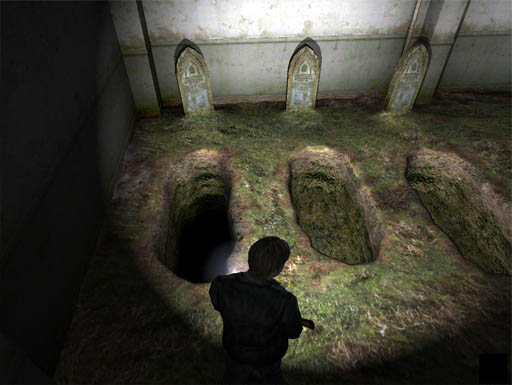 But maybe it does matter, because in addition to the town's outside evil, Silent Hill 2 also makes heavy use of inside evil. There are few human characters in the game, and apart from Laura, none of them are blameless. But only one -- only James -- has a chance at redemption.

Putting the story analysis aside for a moment, I may as well get the game's guilty not-so-secret out of the way: In this issue focusing on the greatest games ever, Silent Hill 2 may well be the worst game of the lot. The puzzles are nonsensical and obtuse at worst and find-the-object fetch quests at best, while the combat is limp and rote. At first blush, it doesnt seem like theres much going on here to provide a compelling reason why Silent Hill 2 should be a video game and not some other, more passive form of media.

But when you consider it carefully, Silent Hill 2 wouldn't have the same impact as anything but a game. On a spectrum from pure play to pure "experience," Silent Hill 2 stands at the forefront of the "experience" end and is as important to the medium as something like Nethack is on the pure play end. I say this because Silent Hill 2 is suffused with evil, inside and out, but it also allows for the possibility of good.

Purely and simply, James Sunderland -- the character you control -- has problems. He killed his wife, for one thing, and for another, hes in deep denial about it. You first begin to realize something is amiss in a way only a game could present: At the outset of the game, James reads a letter from his wife summoning him to Silent Hill. But after a certain point, the letter quietly, invisibly, begins to decay. First, the writing disappears from the paper, and later, the letter vanishes from James inventory altogether. At no point is the player's attention ever called to this fact, it just happens, like a trap waiting to be sprung on the player's sense of normality.

The trap is set too late to clue the player into the truth behind Maria, the near-double of James' dead wife, and so the guilt James feels over the evil hes done -- or the evil he fears that he is -- is likely to be enough for the town to drag him to his death on a player's first time through the game. But careful, attentive players can diagnose the sickness in James' soul and work to heal it. They can reject the glamour of evil by running from it, leaving it isolated, even attacking it, and in the process give James the strength to make a clean break with it in the games best ending.

Still, for all that, the more unpleasant memories remain. I didn't want to play Silent Hill 2 again before writing this article, and I dont intend to play it again afterwards. I've had the experience twice now, and for a game of this sortespecially one as effectively disturbing as thisthats quite enough. It's an expertly crafted abyss, which one can stare into only so long... but one into which everyone should take a glimpse.