As Baldurs Gate II begins, your character finds himself imprisoned by a rather clichéd evil sorcerer and must escape from his lair. Along the way you meet a few faces familiar to Baldurs Gate fans as well as a new one, ultimately going along a linear path while learning a bit about each of your characters backstories. Needless to say, this part of the game seems cribbed from any one of dozens of RPGs, each with a plot blander than the last. The battle system at this level is interesting, but unless youve played the first game it also comes with a steep learning curve for anyone who plans to role-play as anything more complex than a fighter. Looking at the game today, it also sports dated graphics and some frustratingly archaic pathfinding. Theres little to defend it: The first few hours of Baldurs Gate II are in fact mediocre.

Its a shame about that rough start, because if youre able to make it outside the first dungeons linear tutorial, youre abruptly introduced to what is perhaps the greatest western RPG ever made. Once youve escaped, its essentially up to you to decide what to do next. Feel like going after a gang of marauding trolls? Go for it. Feel like infiltrating a thieves guild? By all means, enjoy. Feel like running down a dragon, taking over a ship, awakening an ancient golem? Youll probably be murdered before you get a chance to cast a spell, but the choice is yours, so why the hell not? Now this, this is what Baldurs Gate II is all about. 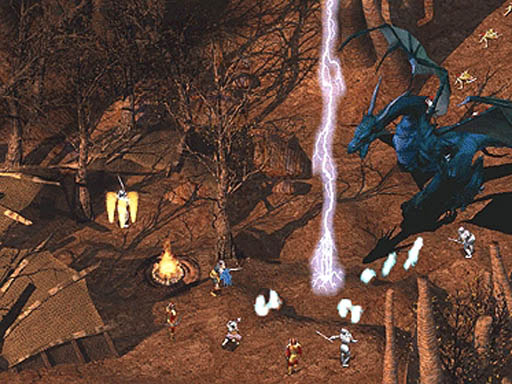 That is to say, Baldurs Gate II is all about choice, and where choice plays best into the game is in party creation itself. Aside from your hero, 16 different characters can join the party under the right conditions, offering the whole spectrum of good to evil and lawful to chaotic. Much of the interest in these sidequests comes less from specific tasks given by party members than it does by seeing how those characters react to events in the game. A druid in your party obviously wont permit you to attack other druids, but you may be encouraged by other members to go ahead and do it anyway. Party members hate and love each other, attack and defend for their causes, leave or join because of your actions. Its not realism per se, but it means that your actions have consequences. By bringing down the number of NPCs from its predecessor, each one that remains is fleshed out with enough depth that the game seems scripted for exactly the group youre playing withregardless of the actual makeup of that group.

Party choice ends up being key for the story, of course. And due to the way this choice is handled, it ends up having a large effect on strategy in the way it compounds the importance of your decisions. Many of the games stronger characters are also polarized good or evil, making it difficult to tweak out the most powerful group without things eventually falling to pieces or at least being whined at an awful lot by NPCs. When sufficiently angered, characters are liable to depart forever, taking their items with them and leaving an unbalanced party in their wake. Its an aspect of strategy that rarely plays into games where the empty NPCs typically follow whatever their leader wants regardless of whatever beliefs theyve espoused. In Baldurs Gate II, that kind of crap just wont fly.

Of course, other RPGs have been made with more quests -- Elder Scrolls games, for instance, pop immediately to mind. World of Warcraft (or any other MMORPG) also functions this way, where the number of sidequests is more or less infinite within an immense world you can explore. What people dont like to admit is that most of those quests are the same thing with slight variation, a few quest types with words changed to extend length. Theyre really no choice at all, just the Western RPG equivalent of the Will you rescue the king? -- No. -- Why not? Will you rescue the king? loop.

Here, though, both the quests and every interaction surrounding them have been crafted carefully. What seem like random events end up having consequences greater than just finding a shinier sword or learning a new spell. Each quest is individual, assigned by a character with a distinct personality, and each is unlike the quests you've previously undertaken. Instead, any random sidequest is liable to help fill in your characters backstory or feature plots that twist and turn so that often youll find yourself betrayed by those youre helping. Baldurs Gate II is not a game of collecting x doodads for y reward; its a game where each individual encounter is well-written.... oftentimes significantly better than the main plot itself, in fact. 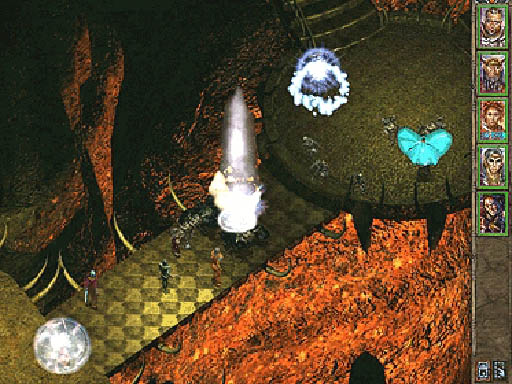 Which is actually saying something, considering that after escaping the games dreadfully boring first act, its main story improves radically. There are still rather lame rescue the girl and find your true power, chosen one plotlines that drive things, but how the game lets you react to plot points is the key. Instead of offering choice only in irrelevant sidequests, Baldurs Gate II repeatedly offers varying ways to move along the main storyline. Do you ally with the Shadow Thieves or the vampires in order to rescue Imoen? Its up to you, and compared with later BioWare games these choices really are choices, without necessarily having the good/evil spectrum at play every time you make a decision. The game was one of the first to take morality seriously, but unlike its successors didnt see the need to put them into such well-defined camps. You can do evil actions or good ones, but most of the choices you make aren't really either -- theyre just choices.

Of course, the primary reason for playing a game isnt the story but rather the gameplay. With so many choices available in every other aspect of the game, battles naturally follow suit. At its core, Baldurs Gate II is a tactical RPG. Its combination of turn-based and real-time battle systems offers flexibility in not just game strategy but also the entirety of the combat engine, without changing the game balance. Its an RPG that, within constraints, allows you to play its battle system the way you want it to be played, anywhere from straight up turn-based to completely real-time. With a character party of six and no limit to the size of enemy encounters, theres little battle repetition. Its not an RPG in which you can simply spam normal attacks until you get to a boss; you have to actually think about each of your battles and whether you should risk a spell, since even travelling back to an inn or resting offers an opportunity to be ambushed.

With so many aspects of the game left up to the player, the ultimate beauty of Baldurs Gate II is that you can beat it and play through again to enjoy a completely different experience. Youve probably been told that about a lot of games, and it frequently just means slight alterations but little actual changes. White mage or black mage, you still kill the dark wizard. Veterans of BGII, though, know that choosing a new class, changing your alignment, and recruiting new characters will mean a completely different game with the same tileset. And thats what a real role-playing game is abouthaving the role you play change your game experience. If BGII offered nothing but that it would be worth checking out. Yet all of this should have convinced you it has much, much more.