Games | PlayStation 2 | Shadow of the Colossus

I love exploring. Pretty much the only way I can muster the willpower to get myself off my ass, away from the computer, and out to get some exercise in the great outdoors is to hop on my bicycle and aim to go somewhere I've never been before. Even a generic suburban neighborhood can provide a surprising amount of varied scenery and unexpected adventure if you simply venture off the main thoroughfares and go wherever your fancy takes you. I once found a gorgeous great blue heron occupying a pond not a dozen blocks from my house that I'd never known existed. Construction sites, happily unoccupied on Sundays, can provide all sorts of adventures. And if you have any state forests or other conservation areas within reach, well, that's the jackpot for exploration.

It's this sense of wonder and unexpected, simple beauty that makes Shadow of the Colossus one of my favorite games ever. On the surface, there's really not much to it. You have an expansive, largely empty world, and you have some bosses to take down. There are no minor enemies to harass you. There are no NPCs to talk to, unless you count the disembodied voice that gives you brief snippets of direction. There are no switches to toggle, levers to pull, crates to push, or locks to open. There's no additional equipment to pick up (barring post-game content), and the only collectables provide strictly marginal boosts to your existing abilities and are completely optional. It's just you, your horse, and a big beautiful world... and the occasional hulking monster that must be bested in mortal combat. 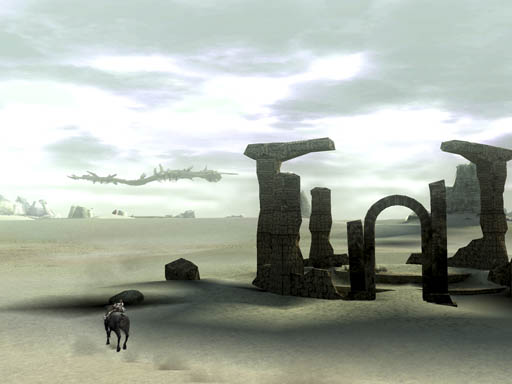 The actual colossus fights are amazing, organic set-pieces that, some camera issues aside, are the highlight of the game for most people. They are admittedly impressive accomplishments, combining terrain and foe in one, giving one the impression of climbing an antagonistic mountain while simultaneously trying to subdue it. With an excellent adaptive score that adds immensely to the emotional rise and fall of each encounter, you approach each beast on its home turf, figure out how best to reach and assail its weak points, and finally bring it down. Few video game events can match the thrill of launching recklessly from one wing to the other of a bird 50 times your size as it barrels through a rainstorm, making a perfect eight-story drop to drive your sword into the belly of an enormous stone lizard, or successfully scaling a 100-foot-tall raging behemoth.

Still, as fun as all that was, I found just as much joy in simply exploring. Shadow of the Colossus is often brought up in the old "Can games be art?" debate, mainly for its masterfully minimalist storytelling, but the fact that many of its vistas could be confidently framed and hung on a wall sure doesn't hurt. Grassy fields, rocky cliffs, expansive deserts, quiet meadows, shadowed forests, weathered coastlines... all are within range of the starting temple, providing gorgeous views unified by a subtle, desaturated color palette. 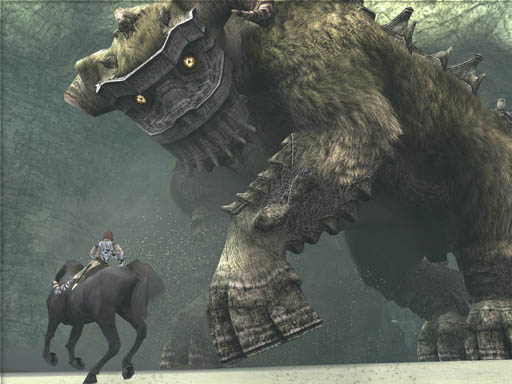 You'll come across many of those views just in the course of following your sword's beacon-like glare toward the next requisite battle. But put away the sword for a while, venture off the straightest path, and there's even more to see and do. Such side tracks may not offer much in the way of gameplay rewards, but you'll find little details that will bring a smile to anyone with the heart of an explorer. Look, there's a pond behind the hill, at the base of an old tree. Stop by and your faithful horse will pause for a drink of the cool water while you watch the large fish moving below the surface. Or notice an eagle following your path while you gallop full-speed across an open plain; daringly stand atop your horse's back, make a leap of faith, and grab... the surprisingly robust birds of this place can carry you for some time before they tire, providing even more amazing views. Say, I wonder, would that also work with...? Yup, returning to the pond and diving in, you find you can also grab the fish, which take you for a brief wild ride through the depths of their little aquatic world.

Elsewhere, a narrow path runs down a steep cliff-face towards the sea. No colossi are about, so what could be down here? Just a quiet beach lapped by ocean waves, nothing more... though it does curiously resemble a beach seen in the ending of Ico, the previous game developed by the same team at Sony. Whether there is truly a concrete connection between the two -- prequel? sequel? -- is unclear, and the subject of considerable fan debate. I have my own theories, of course, but I'll spare you wild speculation better suited for message board debates.

Of course, there are other great things about this game as well. The morally ambiguous story developed with little to no narrative exposition is better experienced firsthand than described. Then there's the way your horse, Agro, acts less like a simple game mechanic for getting around and more like a living, breathing companion, eager to follow your lead but with a will (and, helpfully, an instinct for self-preservation) all his own. It's an extension of the A.I. used for the princess Yorda in Ico, which looks to be expanded upon even further in the team's eagerly anticipated next project, The Last Guardian. I, for one, cannot wait to start exploring a big new world alongside an enormous friendly baby gryphon.