Video games, for all the talk of immersion and freedom developers and critics like to invoke, are narrowly designed constructs.

No, seriously: incredibly narrow. Really, really, really, really, super narrow. Every single object, every single sound, every single law of physics in a games world was placed there consciously. Games like the Fallout and Grand Theft Auto series attempt to create a living, breathing world, but they're still limited by the scope of the technology available and the time the creators put into its making.

But it's more than the limitations of processing power and time; it's about necessity. Videogame worlds revolve entirely around the player. They're contrived, and I don't mean that in the pejorative way. The world presented in a videogame is one big contrivance meant to guide the player/protagonist. Since the players themselves push the narrative forward, the world itself must lead the player to its conclusion. A game will never place an insurmountable barrier or enemy between the hero and the conclusion. Thats why its so easy to save the world in video games; the world was created for the express purpose of you saving it. It's why the better half of video games place the player in the shoes of a Messiah figure. 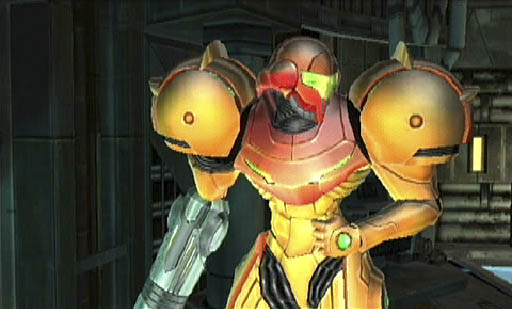 Sure, a game can have forty-five endings, but they were all written by the developers. You can solve a problem in a dozen different ways from nuking it from orbit to negotiation, but you can't come up with an original solution that the creators didn't facilitate. You could use the phrase Illusion of Choice, but that's condescending and belittles the selective editing that's integral to the creative process. But there's no denying that no matter how much choice a game gives its players, they still have to play it according to the game's rules.

That is, unless you cheat.

You can cheat in Metroid Prime. You're nearly encouraged to do so, in fact. It's a trademark of the series. Metroid and Doom? are the series most responsible for the concepts of speed runs, minimalist runs, and the like. The Metroid games were some of the first and most prevalent games to acknowledge players who completed the game under certain times or with exemplary completion percentages. It spawned scores of overzealous gamers who attempted the same with their favorite games. The concept can be taken a little too far, like those glitch wranglers that can complete Chrono Trigger in six minutes by beating the menus senseless. At that point, you're not really playing the game so much as dissecting it. Actually, dissecting might have too sterile a connotation. Think of the highest setting on your blender. That's what they're doing to the game. 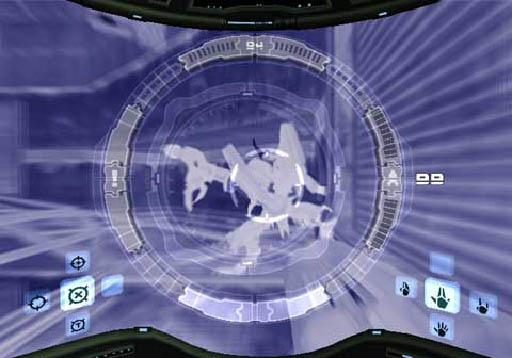 Go to Metroid2002.com if you want an illustration of just how thoroughly you can screw with the game's intended sequence. You can beat the game without half of the power-ups available. You can grab missile expansions before you're supposed to. You can simply bypass some minibosses. It's not like the game nudges you in this direction though. The maneuvers these players use to achieve their ends are not to be attempted by the squeamish. You have to lock on to something scannable, dash sideways, land on half a sliver of an accidental platform, triple bomb-jump, and pirouette with impossible accuracy to make the leaps that these guys have mastered. It's fascinating watching someone master the mechanics of a game so completely. They've almost made their own game based on a pre-existing one. It's the closest players have to escaping the bonds placed on them by a developer's creative vision.

Here's the weird thing, though: If there ever was a game that didn't need the freedom allowed by sequence breaking and other extracurricular possibilities, it would be Metroid Prime. The intended sequence and play experience might be as rigid as any other action game, but it sure as hell doesn't feel like it. I may have just poo-pooed the idea of immersion in games, but damn does Metroid Prime feel immersive.

Part of it is the first-person perspective. A lot was made at the game's release of how steam would fog up the visor and water would drip down when exiting a lake. Most striking was when the light from a large blast would reflect off the visor, flashing Samus' face on the screen for a fraction of a second. It's more than visual gimmickry, it really does make you buy the idea you're Samus Aran. When you're attacked by metroids in the later portions of the game, you panic not because they're sapping your energy at an alarming rate but because OH MY GOD THERE'S A SPACE JELLYFISH ON MY FACE GET IT OFF!!! 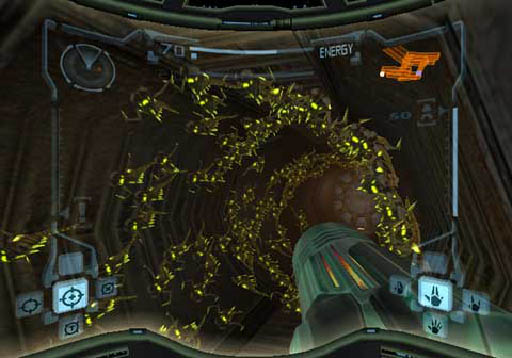 There's also just how organic everything feels. There's a level of verisimilitude that's striking. The environments, though technically corridors connecting rooms filled with switches that can only be activated with the right weapon, seem natural and lived-in. There's a casualness and roughness in the design that makes you buy it instantly. You believe that tree is there not because Retro inserted it to prevent players without the double-jump from ascending to that platform, but because that's where a seed happened to fall. The enemies aren't roving automatons designed to test the strength of your weapons and your reflexes, they're the local flaura and fauna [1] defending their nests and territory.

There's a portion of the game where you come across the crashed space station you escaped in the prologue. Rooms have caved in, water floods the lower portions, and parts have been turned upside down. In Retro's hands, what could have been an opportunity to lazily reuse assets or as an exercise in it's just like the level you played... but backwards! is a moody and disarming sequence. You half-recognize each room, marveling at your good luck for escaping. You climb on top of elevators instead of riding up them. You crawl through holes that weren't there before and duck under the railings of stairways suspended from the ceiling. You fight malicious fish in what used to be a room full of computers. And the whole time you have the distinct thought, I shouldn't be here.

Of course, you are meant to be there. It's the area that stands between you and the Gravity Suit. But you almost believe you're treading where you're not supposed to. It recaptures just a little bit of that feeling you had as a kid exploring the overgrown, abandoned cabin in the woods. Retro, though careful manipulation of aesthetics and mechanics, makes you think you've stumbled on something unique and exciting by yourself.

You haven't. It was placed there for you to find it. Just like how the Triforce was made with no other purpose than to be obtained by Link. But you felt that way. That's what makes Metroid Prime special. It gives you the freedom to reach beyond what the developers intended and the feeling of freedom developed by a well-crafted action-adventure. Few games do either. Prime does both with style.

[1] As an aside, am I the only person who finds it oddly creepy that you spend the first two-thirds of most Metroid games decimating the planet's ecosystem before the space pirates and metroids show up? Just me, huh? That's okay, it's no biggie.