Valkyrie Profile is one of those games that enthusiasts like to talk up to their friends as one of the true classics of the genre, although most people would probably file it under the heading of pretty good, but mostly forgotten. Nevertheless, it's the only game developed by Tri-Ace (save the now-defunct Star Ocean?) to have established a series. Sadly, though, even its own sequel tended to ignore the single greatest lesson Profile had to offer players: keep things brief and to the point.

Or perhaps it would be more accurate to say that Profile makes individual playthroughs incredibly brief compared to modern 50- or 60-hour epics consisting of text boxes, poorly dubbed dialogue, and several small mountains of monster corpses. In that respect, it shares a number of similar characteristics with fellow cult favorite Breath of Fire: Dragon Quarter, which demonstrates a similar emphasis on tactical combat and higher-level strategic thought. In Dragon Quarters case, thats due in large part to the fact that the story and mechanics alike aren't designed to be fully grasped in the span of a single playthrough; rather, only over multiple plays does the plot unfold and the party's combat capabilities slowly come into their own. Its a brilliantly counterintuitive approach that, alas, practically killed the series, since it cast aside most of the traditions fans had come to expect from the name Breath of Fire.

Profile is different, yet strikingly similar, at least on a conceptual level. As the titular Valkyrie you the player are the one acting as head recruiter for the Norse gods, beefing up their armies for the coming battle of Ragnarok. The shape taken by the games story and endings is entirely dependent on which dead warriors you choose to send to Valhalla and how you decide to improve their personality traits beforehand. Further complicating matters is the fact that the gods have specific requirements as to the people they want, and youre on a time limit. Its not as restrictive as it sounds, but it definitely forces the player to know what they want to do ahead of time, since there's so little free time afforded for extra grinding. But it works, because the game is designed around these factors. 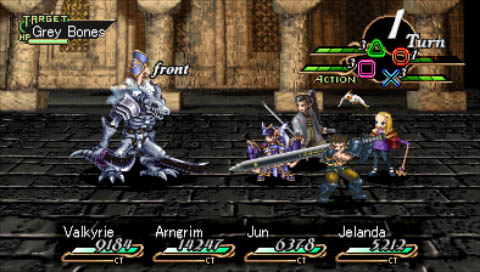 What this means is that Profile amounts to a fairly technical game that depends on the players knowledge of how the various gameplay systems work in order to properly play the game. Its short, intimately scaled, and exquisitely balanced; more importantly, it works. Profile is a game that feels like it was designed and created around its core mechanics, a trait which is sorely lacking in tri-Aces more modern offerings. The broad cast and multiple endings give the game actual replay value, as opposed to merely unlocking higher difficulty levels in battle or a New Game + mode.

That replay value is a large part of what sets Profile apart from the packand even from its own sequel, to a large extent. Where most RPGs are designed to be one long experience, Profile is designed to be short and easily repeated, which marks a welcome change of style for the genre. Part of this ties into the games wider plot, which doesnt necessarily coincide with the player's initial role as a glorified Army recruiter; and solving the mystery of just how to get the true ending and how the Seal system plays into sending warriors to Valhalla is the rest. It is in short a game about choices and about carefully weighing the options before making one. That sort of quality is rare in any video game, really, save for text or graphic adventures. The only thing rarer is to see it executed as competently as it is here.