There was a time when John Carmack's .plan file was required reading amongst anyone who was into the future of gaming. (For those not on the Internet during those halcyon days, a .plan file was basically an ancient form of blogging. Yes, this does ruin the poetic nature of the opening a bit.) Give him enough time alone with a computer, and he could do things with it that it'd take an army of Japanese programmers and specialist hardware to replicate -- things that seemed impossible. It took special hardware for the NES to scroll as smoothly as his PC adventure Commander Keen did, and his algorithms for light calculations pushed the industry forward by leaps and bounds. But there was one area where Carmack was not on the vanguard: He famously dismissed fellow id employee Tom Hall's elaborate backstory work for Doom with the dismissive remark, "Story in a game is like story in a porn movie. It's expected to be there, but it's not that important." The industry -- at least, the Western game developer industry -- more or less fell into lockstep agreement with Carmack.

In a lot of ways, Half-Life is the ur-Western game. The aesthetic that Japanese studios are grasping for when they say they want to make "Western" games traces its roots to Half-Life. Instead of id's deliberately unrealistic levels, Half-Life was set in a plausible place, a secret research complex built into the mesas of New Mexico. Instead of id's anonymous space marine heroes, Half-Life put you in the shoes of research associate Gordon Freeman, going as far as flashing up a summary of Gordon's CV during the five minute tram ride that opens the game... and caring about mood enough to not let the player do anything but wander around a train car for five minutes was definitely something new for games. Half-Life used its toolset, its setting, its level design, and the scripting technology Valve built, to build memorable set-pieces which gave each section of the game a personality. FPS games before Half-Life didn't put much effort into personality, or verisimilitude, or any of that touchy-feely stuff. Valve believed in verisimilitude so much that from the moment the game starts to the moment it ends, the player never breaks away from Gordon's point of view, and levels smoothly transition into each other instead of the old standard of a flashing "EXIT" sign. 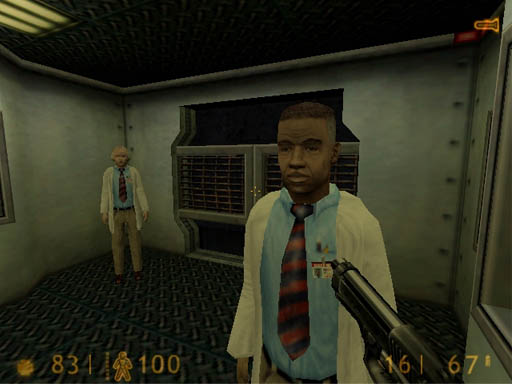 But does Half-Life really prove Carmack wrong? The game's plot is very simple: first aliens, then the Government, want to kill you, and so you try to meet up with survivors. Eventually, you end up on the alien's homeworld, where you kill their leader. And then you're abducted by a weird dude in a suit. The ending is legendary for how unsatisfying it is, especially considering the alien homeworld levels are some of the worst in the game. Valve's "no breaking character" stance is seen as extreme by other developers, who'll certainly try not to break character but won't break their story if it's easier to take control away from the player for a bit. And Gordon Freeman remains as much of a cipher at the end of the game as he does at the startValve makes no attempt to develop his character, makes no demands on the player to behave as Gordon Freeman would. Freeman's vital statistics remain filler for the opening train ride; in all other ways, he's as anonymous as Doom's space marine. 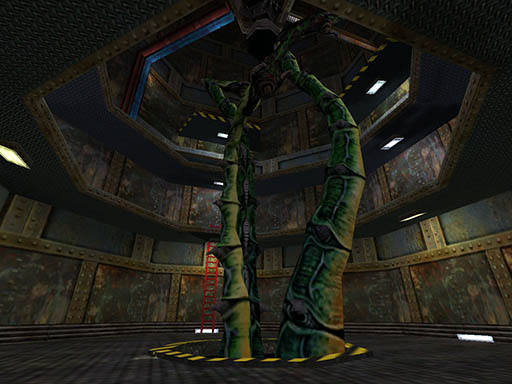 Valve did prove what Carmack said was wrong, but not the intent behind his words; Half-Life isn't going to go down as a cultural event, like most porn movies, or even as a game with a particularly good plot. But Valve did prove that stories were important in one way: it gives the gameplay context. You're not some guy going through level two; you're Gordon Freeman, wandering around an administration block in the Black Mesa research facility. You're not a born fighter; you see the first enemy well before you get any weapon, and even then it's the melee weapon that greater FPS heroes resort to when they run out of bullets. The creature in the blast pit who detects prey by sound wouldn't work in Quake, because its abilities and its eventual defeat are both made clear by the context the level provides. Half-Life's enduring legacy has been to make Western developers think about the way their stories feed into their gameplay, which is probably why so few have been much more ambitious than "space marine shooting things." That's all the gameplay is, after all. But Half-Life's legacy has also meant a focus on set pieces, memorable moments, and gameplay that evolves out of the setting. With the right story, the right context, a great game takes flight and becomes extraordinary.