Sequels. As much as people complain about how Hollywood is bogged down by them, or how the existence of seven Harry Potter books is destroying literature as we know it, we gamers realize the truth: sequels just cant get any more brazen than they are with video games. One of the most popular games ever made is no less than the seventh installment in the Final Fantasy franchise. The seventh. And 2008 somehow ended up being the year of fours: Devil May Cry 4?, Metal Gear Solid 4, Grand Theft Auto IV?, Persona 4?, Soulcalibur IV?, Street Fighter IV? and those portable remakes of Final Fantasy IV and Dragon Quest IV come immediately to mind. And there are probably others I'm overlooking. Worse yet, in many cases the number 4 doesnt actually represent the true number of entries in the franchise. And then there are fourth games that quietly skipped their numbers, presumably in an effort to trick gamers into thinking, "Hey, this must be new and fresh!" Ace Attorney: Apollo Justice is one such secret 4 -- in this case, the fourth chapter of the crazy turnabout court trials Capcom kicked off back in 2001. 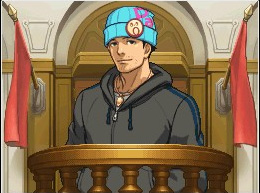 It's no secret that the more you stretch a concept without actually having planned it out beforehand and the higher the number you slap at the end, the less sense the results will make. Sometimes, when companies dont want to overextend their franchises too much -- or when they've already reduced them to ashes -- they go the same franchise, new story/characters route. Capcom is the master of this tactic, putting it to use every time the latest Mega Man spin-off wears out its welcome. Sometimes it even works to good effect, as with Street Fighter III, which introduced an all-new cast of characters, including a guy named Alex who was intended to be the series' new protagonist, which lasted as long as it took for Capcom to realize that fans just want to beat the tar out of dudes with Ryu, thanks very much. And here it goes again with the fourth Ace Attorney title, which drops Phoenix Wright into a supporting role. But unlike with Mega Man and Street Fighter, where the story is simply an excuse to shoot robots or punch people, Ace Attorney is a franchise built almost entirely on the developement of its characters. Yeah, that development can be pretty convoluted, but it's always interesting enough to keep fans coming back for more.

So, while it was a good idea to move forward with a new cast to avoid ruining the Phoenix Wright story arc, it was also a bit risky as fans love for the established cast of Nick, Edgeworth, Gumshoe and Maya could have backfired, especially if their replacements were sorry substitutes. At the same time, though, the new game would require more than just repeated patterns with an obvious change of skin over a familiar template -- well, Capcom's tried to get away with worse, but we like to hope for the best. No, to make this game work, new characters and stories were needed to convince old fans that it's OK to move on. 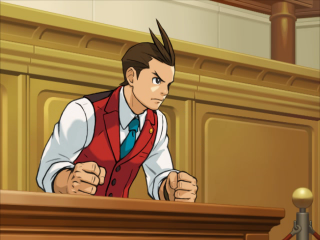 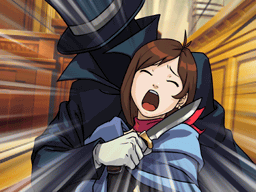 And by and large, they pulled it off. Apollo Justice features plenty of familiar locations from the previous games being explored by a new cast. While the new characters still represent anime clichés and archetypes -- the hero, the support female character, the mentor, the rival -- their personalities and relationships differ from those in the previous trilogy.

Apollo is, of course, the rookie attorney wearing Phoenixs shoes (but not his pretty pink sweater); unlike Wright, though, Justice is a little younger and more cheerful...though he definitely retains some of Nicks penchant for sarcasm from time to time. Trucy is basically your Maya Fey in turn, supporting you whenever you need it; but unlike Mias sister, she is a little brighter and smarter. Which isn't to say she's necessarily any more helpful, though. And without dipping into the realm of spoilers, suffice to say that the relationship between the two is different enough from that of Nick and Maya's to smash any possibility of anything beyond friendship.

Replacing ice-cold Edgeworth is Klavier Gavin, who unlike Phoenixs childhood friend isn't someone looking for a perfect score; instead he seeks justice, even if that means losing the case. He's still annoying for dudes and "cool" for gals (I guess?), but at least his methods are more on the up-and-up. And taking (too-good-but-too-distracted) Gumshoes place is Emma Skye; she's seemingly grown rather bitter over the years, but remains very enthusiastic when it comes to science.

The judge remains the same, though. Same sprite, even. But we are talking about the company that failed to change Morrigan's sprite for years, here. 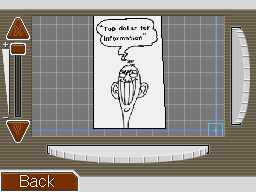 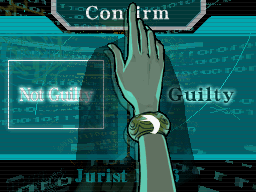 With this all-new cast, Capcom not only ensured a fresh continuation of the Ace Attorney franchise but also open a door for newcomers who missed out on the first three games. Yet they were smart enough to leave an obvious connection to the events of Phoenix Wrights story arc for old fans of the series. In a sense, this fourth game is not as much a new start as it is a preparation for a new start. Sure, it introduces the new characters, but more importantly it closes Phoenix's chapter, explaining why he stopped being a lawyer and started being a jerk. Also, the game introduces the new MASON system (in which a jury decides whether someone is guilty or not), though this edgy innovation ripped from the pages of that fresh-faced new law theory tome the Magna Carta arrives very late into the game and seems to serve largely as a demo of what will come next in future installments.

For those who didnt like any of the previous games for whatever reasons -- the soap opera storylines, the anime clichés, the huge amount of suspension of disbelief required -- this new start isn't going to change your mind. Sure, it has new characters, a new storyline and a new gameplay system, but it's still an Ace Attorney game. And Capcom being Capcom, the formula's only been tweaked just enough to keep fans interested. For those who liked the original trilogy, though, Apollo Justice is probably old news to you already. Capcom managed, either by chance or careful thinking, to keep the franchise interesting while staying true to its roots.

I hope it was careful thinking.