I'll admit, Age of Empires III was kind of a tough sell for me.

It wasn't the series, the developer or anything of the sort -- the game's pedigree was frankly impeccable. I'd always enjoyed Age of Empires. No; I'm ashamed to admit it, but I simply didn't like the setting. Age of Empires III narrowed its scope of history from the thousands of years of early human development featured in the previous installments to a few hundred years in colonial America. Though I tried, I could not fathom how the game could manage to make such a setting interesting. Tri-cornered hats, tights, and muskets are not exactly my go-to war fantasy.

Even after its release, I ignored the game for some time, happily playing away at whatever else tickled my fancy, barely giving a thought to the newest installment of a beloved series. Occasionally, something would tingle in the back of my mind, urging me to pick up the game and give it a spin -- to stop being so hung up by the setting. These thoughts began to come more and more frequently, and eventually I gave in and brought Age of Empires III home.

At the time, I'd been out of the real-time strategy loop for a while. The last game of the sort I'd spent any amount of time with had been AoEIII's immediate predecessor, and that was nigh-archaic by this point. A lot of entries had come and gone in the interim, and I was unsure of what I was about to get myself into. Not to mention the fact that I was never more than passably proficient with any previous RTS. Most of my game time came from LAN parties with friends, playing stomp-the-comp or forming into teams of equally unskilled players. My experiences were entirely casual, but also entirely fun, as playing with friends always tends to pleasantly tint the experience. When I began with AoEIII I was less worried about becoming an elite player than just making new stories to swap around the table late night at IHOP.

Still, I was aware that a higher level of play could be achieved with the right amount of dedication. The game replays and match videos that the hardcore RTS community swapped around weren't exactly beyond the realm of my comprehension; it's just that the people who compete in those circles simply understood levels of the game that I was either unwilling or unable to reach myself. It wasn't completely out my reach as a player, it simply wasn't where I wanted to be. I wanted the game to be more of a medium where I could connect to my friends and expand our camaraderie. 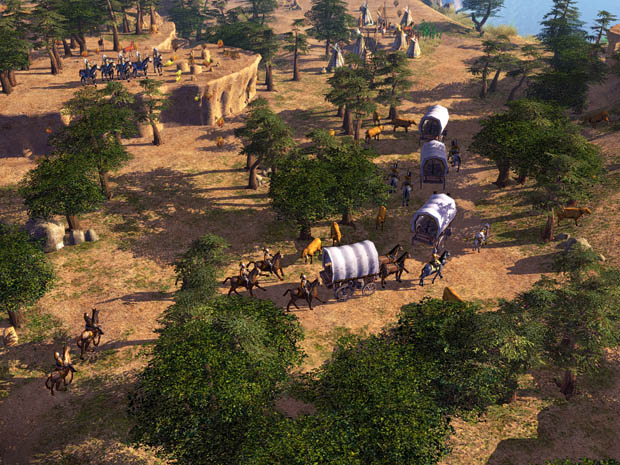 I dabbled a bit in the single-player campaign to get a taste of what this new iteration of the series would bring to the table. Most intriguing to me was the deck system, which initially reeked of shoehorning some misplaced notion of "modern" game design where it didn't quite belong. In essence, each player gained experience throughout their tenure with the game and could use that experience to unlock special cards which could be played during the course of a match. The effects of these cards could range from bonus resources, to increased resource gathering efficiency, to extra troops, and beyond. Most notably, the powerful castle building, previously as easily built as any other standard building, was now represented by a single card and delivered as a slow-moving and vulnerable wagon of parts which could be used to build a single castle. At the time, this seemed like a needless nerf, and I couldn't see the reasoning behind it. My hesitation regarding the colonial setting hardly compared to the worry I felt about this new deck system.

When I did sit down to play this with friends, though, we had a great time. The series didn't disappoint, and it felt great to be playing a modern RTS; I especially enjoyed all the nice little touches that had been implemented to streamline play during the years I hadn't been paying attention. We didn't fare especially well against CPU opponents, but that had never been our goal. Still, as we kept playing, some natural competitive instincts began to bubble up, and each subsequent loss to the computer began to grate against us. We worked together, we worked quicker, yet nothing could seem to stem the tide of invaders that would inevitably crash over our carefully built walls and defenses. Accustomed to game AIs cheating their way to victory, at first we wrote it up to that. As time progressed, however, we began to suspect that perhaps we were going about the whole game wrong.

In my previous RTS experiences, I'd always found turtling up to be an effective strategy. First, I'd build a large, reinforced defense network including walls, cannon towers and defensive combat troops to protect myself, and then I'd put together an offense to throw against the other player. This was the strategy we were employing in AoEIII, and it crumbled time and time again. One wave of troops would barely be fought off, we'd send our bedraggled peasant forces once again to try and repair the damages, and before we could recover another force would swell into view. Each time they would grind us down, and we could never quite restore our defenses to where they had been before the assaults. Eventually, the defenses would buckle and break, and the fighting would be inside of our base instead of outside, and that would be the end. Leaning back in our chairs, we'd view the post-game stats, never quite sure what had just happened. It seemed impossible that our defensive fortifications could be built any quicker or any better. 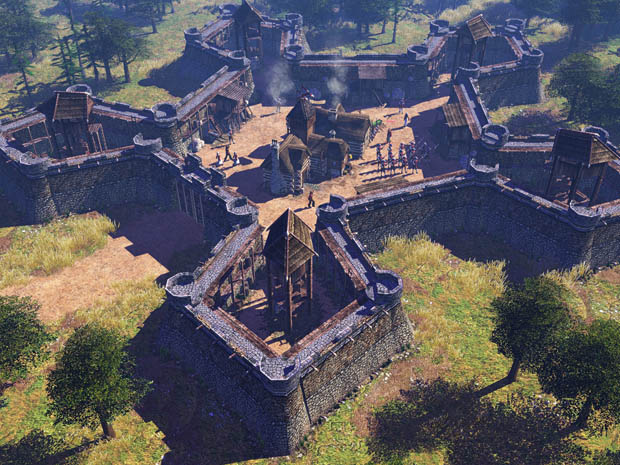 Fast-track to flagging interest. We had been standing on a plateau, and now it seemed inevitable that the desire to play Age of Empires III would begin to tumble down the steep slope ahead of us. Only a breakthrough -- only proof that it was us and not the game that lead to our constant defeats -- could possibly keep the disc in our trays. Late one night, I decided to watch some recorded matches to try and worry out some idea or another of what else to try. Maybe the cannon towers should go outside the walls. Maybe scattered defense outputs built away from the city. I would try anything.

What I found was someone playing this game I thought I knew so well in a way I almost didn't recognize. Instead of spending time building walls and defensive works, the player in the recorded game quickly turned to offense, sending waves of troops toward the enemy camp as soon as he could finish them. Next to nothing was left behind at his base. In short order, he dropped his castle, not in a prime defensive spot near critical buildings, but just outside the opposing town! He used the castle as a forward staging area -- it protected itself with its own cannons, and he was able to produce troops within spitting distance of his primary target. I was floored. Though the game I watched was probably not an example of the absolute best the community had to offer, it did make me understand exactly what we were missing. Defense would get us nowhere here. This game was all about offense. And it had to be fast.

I recounted my epiphany to a friend, and while he was unconvinced at first, we decided to test this new approach against a couple of computer opponents. While surely messy, it led to a victory. Then another. And another. Soon we were turning up the difficulty level and numbers of opponents. Through application, the reason for this strategy became apparent -- it was all about resources. Previously I viewed resources as simply a means to an end to get troops and buildings. With the implementation of the fast attack strategy, I began to see resources as the end-all, be-all of the game. The walls began to fall, and I saw the game that was really happening. I had previously considered this the realm of the hardcore and elite, yet here I was taking my first steps into it. Sending combat troops immediately upon building them to harass supply lines and slow down growth yielded increasing returns. Not only did the enemy waste precious early moments rebuilding the peasants I had killed, but during that time their resource gathering potential nose-dived while mine continued on. When my next attack came, it would be that much more powerful compared to what they could muster, and do that much more damage. The speed of the attack was everything. 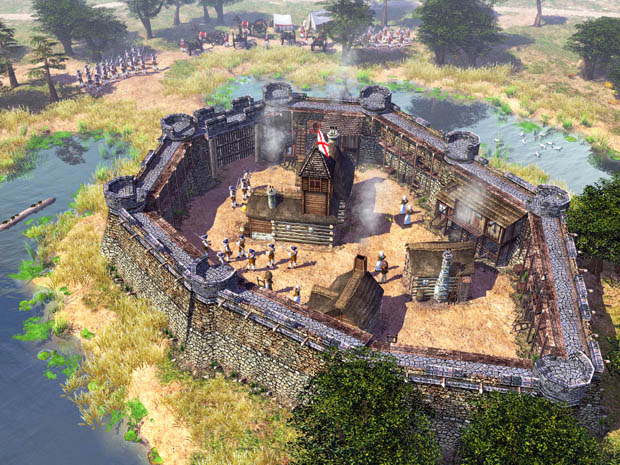 Even the mystifying deck system began to make sense. It wasn't about misplaced game design, it was about being able to build a more fine-tuned strategy for how you played the game. There were few throwaway cards that wouldn't have been effective anywhere. While a particular card may not have made sense to every civilization, it was hard to imagine that someone out there wasn't finding some use for it. Even the singular chance to build a lone castle made sense, given the newly-revealed power of the building. When the "Warchiefs" expansion allowed for decks to contain a second castle card, the effect was profound.

Long-time RTS enthusiasts may be nodding their head sagely, or perhaps shaking it with disbelief that this was the first time I was able to see into the underlying systems of a game like this. Ironically, I think it may have been the setting, my initial turn-off regarding the game, that allowed my understanding of the genre at all. With my cool reception of the colonial motif, it perhaps allowed me to not be so caught up in the fluff of setting and see the cogs beneath that turned the whole thing. For that, I tip my tri-cornered hat to Age of Empires III. Though you won't see me in tights anytime soon.

Previous: 1999: The End of Space Combat Simulators | GameSpite Quarterly 4 | Next: The Chronicles of Riddick: Escape from License Butchery