Back before furries arrived on the scene en masse, anthropomorphic Teenage Mutant Ninja Turtles rip-offs like Biker Mice from Mars were serious business, generating big money (and, in those innocent days, a refreshing lack of fan porn). They were such good business, in fact, that Rare felt it right to step into the breach and launch a whole franchise based around frogs with skin conditions. What resulted was a game called Battletoads, a brawler that would quickly become become a curious fixture of gaming history -- loved as much for its fresh take on platforming as it was hated for its sado-masochistic difficulty level.

Like their mutant cousins, the 'Toads go out of their way to be "hip" and "with it." Their sensei is a trash-talking vulture named Professor T-bird. Their nemesis is a trash-talking seductress with hair like David Bowie circa 1986 and dressed like the X-Men's Black Queen. Tossed into the blender, it all ends up feeling strongly reminiscent of Earthworm Jim, though without the latter's self-awareness. Jim's creators let their creation's absurd premise itself govern their game's humor, but Battletoads misses the point all too often. 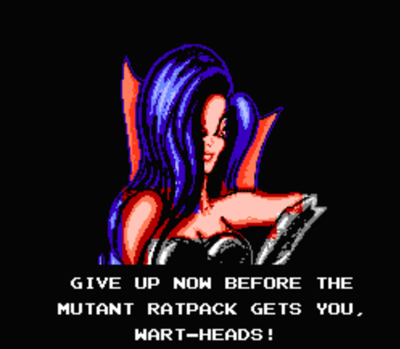 Rare tries to make up for the game's lack of self-effacement by making it hard. Not just you-might-have-to-continue-once-or-twice hard, but soul-breaking, I-will-never-ever-beat-this-game-so-long-as-I-live hard. Ninja Gaiden is often touted as a prime example of that mentality, but even Ryu Hayabusa and his damn ninja-hating birds are no match for the sheer frustration embodied by Battletoads. Impossible jumps and controller-smashing vehicle levels are par for the course here -- and even those are really only there to whet your appetite for the entrée of true pain served up toward the end.

The game starts relatively slowly, allowing players to breathe easily and even rack up some extra lives as they negotiate the surface of Planet Ragnarok and bludgeon stock enemies like battle-axe-wielding pigs. So much for the kid gloves. Upon reaching the speeder bike course in stage three, all but most battle-hardened old-school gamers will discover that they've hit the proverbial brick wall. The literal brick wall, too, in the case of the obstacles strewn unfairly about the bike course. There are likely thousands of gamers -- and probably many more -- who can attest to the pain of encountering the third stage of Battletoads as children, rendering the game a kind of child abuse. No child could reasonably be expected to have reflexes developed enough to conquer the final, brutally fast stretch of that stage. Unless maybe they grew up in a ninja clan.

The victorious (or truly patient) few will move on to find a prototypical ice stage that somehow manages to be even more difficult than the previous level. Between avoiding falling icicles and engaging in snowball fights with killer snowmen, the player must avoid a variety of low-hanging spikes by executing a number of precise jumps. Failing to do so results in instant death.

And yet, all of this is child's play compared to one of the most absurdly difficult stages ever: the damnable snake level. Players are required to negotiate their way to the top of each room on the backs of multicolored snakes that wind their way in and out of holes situated in the walls. This wouldn't be so bad if the designers hadn't seen fit to scatter spikes throughout the level, with the third room containing floors and wall made almost entirely of spikes. The game's villainess saw fit to make her spikes of the same substance Dr. Wily used, meaning the slightest touch was instant death -- and the 'Toads were a whole lot bigger and clumsier than Mega Man. Truly the stuff of nightmares.

These are only a few, select examples drawn from the early game. It only gets worse as it goes: Practically every stage has its share of obstacles, and avoiding them is borderline impossible. Exacerbating the frustrating is the bizarre, pseudo-isometric perspective Rare employs in most levels, a cheap 3D effect that tends to cause unwary players to suddenly fall off the edge of the stage if they move a pixel too far and makes misjudging jumps a hair-pullingly easy error to make. Battletoads features co-op play, but it comes with the caveat that you can kill your buddy with a single mis-timed attack a la Double Dragon. Worse, a game over from one player will send both back to the beginning of the stage. And those with the resilience and skill to make it all the way to the eleventh stage with a friend intact (rather than just relenting to temptation and kicking the crap out of each other in frustration, turning on one another like dogs trapped on an electrified floor) will encounter a crippling two-player bug that halts all forward progress. 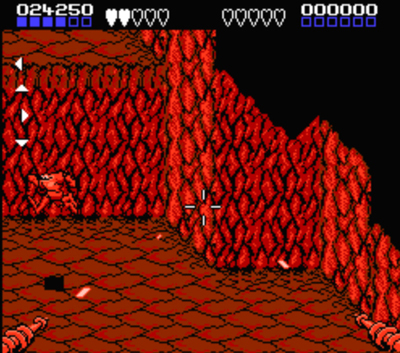 The steep difficulty is so brutal and so skull-crushingly unfair that it ends up obscuring one of Battletoads's biggest positives. In an era where indistinguishably bland platforms and quick-and-dirty licensed games littered the landscape, the game possessed creativity in spades. The stages, sadistic as they were, stood apart from the competition by merit of the imagination on display. You might not have liked the infuriating bikes, snakes or the "clinger winger" (a kind of spite-powered unicycle with suction cups for clinging to the ceiling located in the penultimate stage as a final last-ditch effort to keep anyone from ever seeing the ending), but you had to at least give the designers points for creativity.

The graphics also stand out on the higher end of the NES spectrum, including a few stages that utilized technology normally reserved for the higher-end 16-bit systems: Independently-scrolling backgrounds. Battletoads wasn't quite as colorful and appealing as its contemporary Super Mario Bros. 3, but it pushed the NES to its technical limit and earned endless praise from critics. Most of the stages looked great then, and still hold up quite nicely today -- particularly the final levels.

In the end, word-of-mouth and a massive push from Nintendo Power created enough sales that the series managed to spawn a few sequels (most of them considerably easier than their progenitor) before dying out the release of the crossover Battletoads & Double Dragon. Yes, two marvelous shades of pain for the price of one! Today, the game has largely become the province of speedrunners, with a retro version unlikely to see release on either XBLA or the Wii VC due to a mess of copyright issues as well as what appears to be undying bitterness toward those new-fangled easy games on the part of the creators. (See the various interviews floating around the web for an example.) It's probably just as well, though, since the game's faults really haven't improved with age. 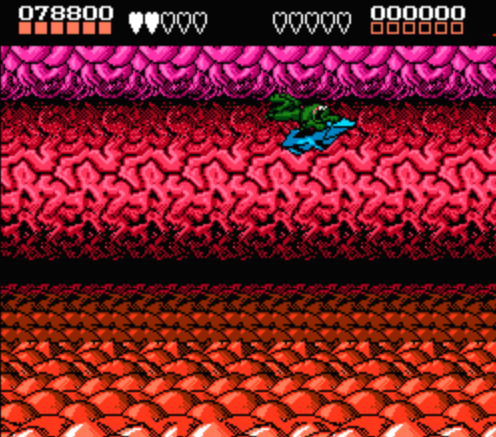 The ultimate problem, and Battletoads's greatest failing, ends up being that the designers at Rare didn't seem to understand one of the cardinal rules of gaming: Exceptional difficulty is fine so long as the player feels like the master of their own fate. The newer Ninja Gaiden? games have done a fine job of treading this tenuous line with its deep and intuitive combat system, which lead most players to believe that they simply had to get better if they wanted to finish the game. Battletoads, meanwhile, fails because it's rife with arbitrary death traps and obstacles that require an inhuman combination of precise control, patience and luck to clear. At a certain point, difficult games go from fun to just annoying. Battletoads doesn't simply cross that line, it jumps up and down on the other side and shouts insults at you.

But for those who are willing to look past its maddening difficulty, Battletoads could make for a worthy retro pickup. The stages seem almost as creative now as they did more than fifteen years ago, and the graphics still hold up quite nicely. Just don't go in thinking that you actually have a shot at beating this one. That way madness lies.