This article is laden with spoilers. Would you kindly look elsewhere if you haven't yet played it.

In the recent video-games-as-art debate (or debacle, if you prefer) between esteemed film critic and eminent screenwriter (Beyond the Valley of the Dolls, and that's not a bad thing) Roger Ebert and horror icon Clive Barker (Clive Barker's Jericho, and that's not a good thing), Ebert vocalized his take on why games are incapable of being art. "Video games by their nature require player choices, which is the opposite of the strategy of serious film and literature, which requires authorial control," he wrote. Barker's response: "I think that Roger Ebert's problem is that he thinks you can't have art if there is that amount of malleability in the narrative...if something is so malleable, full of possibilities not under the artist's control, then it cannot be art. That's where he is wrong."

Of course, they are both wrong. Really, historically, games haven't given you much choice over your actions. In Galaga you choose to move left or right, choose to shoot or not shoot. On occasion, you can decide whether or not to let your ship be captured. That's it. Later games such as Gradius?, R-Type?, Super Mario Bros., and Mega Man are more like obstacle courses. The latter at least let you choose whether you wanted to play on the swings or carousel first, but the others wouldn't even let you choose to turn back once you've begun scrolling to the right. The invisible hand is ever pushing you forward, or at least blocking your backtracking.

More recently, the likes of Grand Theft Auto have offered more open play areas, spearheading what's been dubbed "sandbox gaming." These offer an illusion that you can do anything that you want, but even so, to beat the game, the player needs to complete a specific, largely linear set of events. In Oblivion, you can spend countless hours messing around as a vampire or robbing everyone blind, but to resolve the Sean Bean plotline, you must eventually buckle down and complete the story quests. In fact, the story thoughtfully waits on hold while you're screwing around. You have a choice whether or not to pursue these extracurricular activities, but in the end, the result is the same. 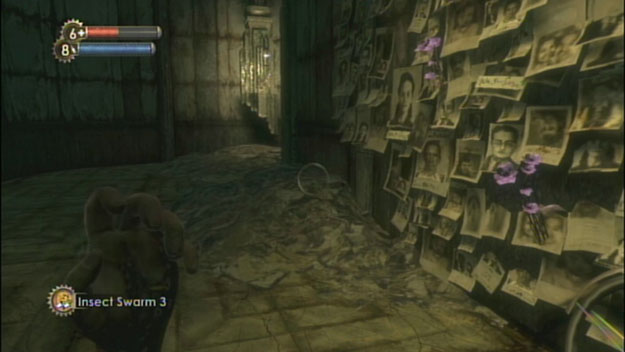 Which brings us to Irrational's BioShock. The packaging for BioShock boasts that "no encounter ever plays the same, and no two gamers will play the game the same way." This is true on a certain level, in terms of the options available for destroying Rapture's mutant flappers and developing your character's stats, but even so, there are at least two encounters where every player has to play the same way.

The most dramatic of these is the climactic confrontation with the game's presumed villain, Andrew Ryan. Throughout the course of your adventures in Rapture, Ryan's basic philosophical tenet is drilled into your head, either via intercom or various tape recordings scattered throughout the city: a man chooses, while a slave obeys. Of course, Ryan has been cutting corners on this front for quite a while by the time you arrive in Rapture, what with all the pheremonal mind control of the Splicers and all. The entrance to the first bathysphere into Rapture has a banner proclaiming: "No gods, no kings, only man." This is rather contradicted by the giant statue of Ryan, imposingly staring down at you as you make your initial descent. He has simply replaced religion with his own cult of personality. Or rather, marketing -- truly a man ahead of his time.

When your character finally goes to confront Ryan, the man behind Rapture doesn't attack you like a typical boss enemy. Rather, he illustrates how little control you actually have over the game's events. With the control phrase would you kindly, he orders you to kill him. This is his way of either choosing the time and place his own death -- even going so far as to deactivate his regenerative Vita-Chamber -- or, ideally, forcing you to make a decision and break your conditioning. Naturally, the latter doesn't happen. Instead, you embed a putter into his skull and promptly set his stronghold to self-destruct. 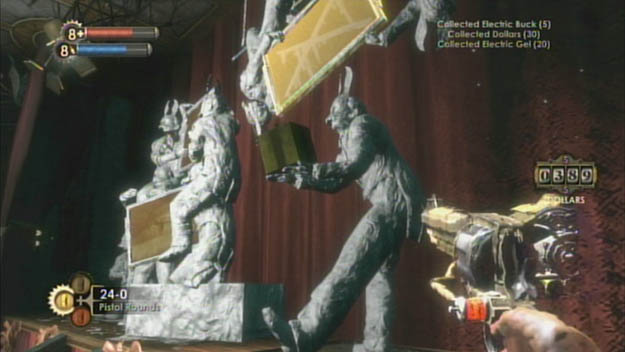 ...The plaster's gettin' harder and my love is perfection / A token of my love for her collection...

After Atlas, the standard FPS guiding-voice-in-your-ear, has revealed himself to be Ryan's erroneously-presumed-dead nemesis Fontaine, your tenuous ally Tenenbaum breaks your mental hold. At this point, one would think that you've been liberated, able at last to be a willful free agent, reacting to events as you see fit. But of course, you can't. No, instead, you must march forth and defeat Fontaine, as his downfall is the only way out of Rapture. Even Dragon Warrior's Dragonlord gave you a choice to join him or not, even if it was an empty gesture.

Ultimately, player choice in BioShock boils down to how you are able to destroy your enemies. Do you hack the turrets to do your dirty work for you? Do you beat them with a wrench? Which plasmids do you buy and equip? Do you just shoot Steinman in the face, or do you psionically launch one of gaming's ubiquitous red barrels at him? There are some other choices to be made as well; or instance, do you kill mad artist Sander Cohen unprovoked, or do you wish him well on his plastery endeavours and be on your merry way? None of these decisions have an effect on how the rest of the game plays out, though. The critical path remains unchanged by your actions. Choosing not to kill Cohen in Fort Frolic lets you enter his apartment in Olympus Heights for access to a weapon upgrade station, but chances are you'll end up killing him here anyway, robbing the previous decision of much of its gravity.

The Little Sisters -- the young girls who roam the hallways of Rapture harvesting genetic material from the army of Splicers you've killed -- are treated likewise. Now, the use of good and evil can make for some very interesting gameplay. In Knights of the Old Republic, for instance, pursuing good and evil alters the plot significantly, gives you new powers and determines whether your class will be Jedi or Sith. Become a Sith, and the "good" characters in your party may need to be slaughtered; go on a kill-crazy rampage in the Imperial City, and you will become an outlaw. Oblivion is less structured, but still the player if free to do whatever he wants to reach their ends, save for killing critical NPCs. And these decisions have consequences. 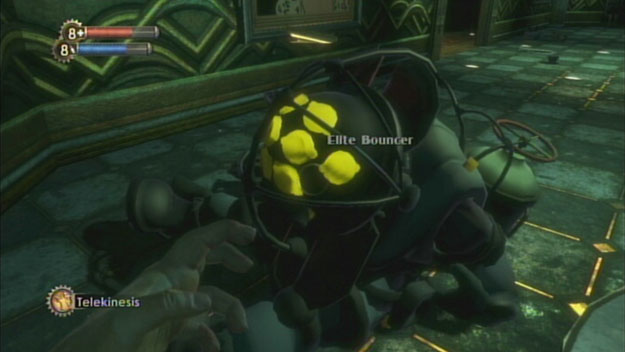 When choosing whether to save or harvest BioShock's Little Sisters, harvesting initially appears to yield more ADAM, the precious gene goo that lets you equip and augment plasmids. It's an interesting notion, that the easier road is the one fraught with moral peril, that doing the "right" thing (I think we can all agree that killing children is wrong) makes for a more difficult path. But after saving three Little Sisters, you're rewarded with a large amount of ADAM -- meaning you do in fact get similar rewards regardless of your decisions. The good path even results in some bonus plasmids which can be charitably be described as mediocre. The paths of good and evil, then, work out to be more or less the same from a gameplay perspective.

Your treatment or misuse of the little sisters is immaterial to the main plot. There is no consequence for going on a ADAM-hungry murdering spree. Tenenbaum will still rescue you, and the Little Sisters will aid you in defeating Fontaine in the end, no matter what. The endings vary according to whether or not you saved all of the girls, but those are mere bookends. Despite some touching moments in the "good" ending, the minute-long epilogues seem tacked on. 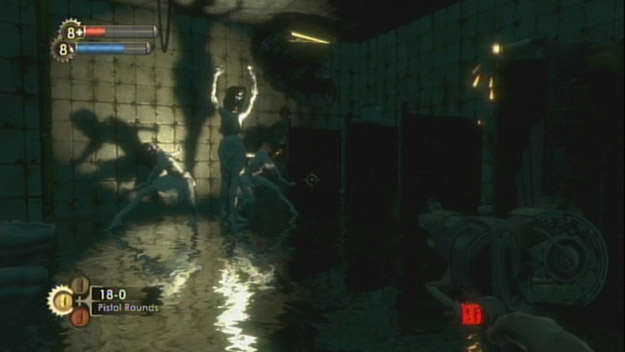 Roger Ebert's criticism of player choices undermining authorial control is therefore inherently flawed. It is the designers that determine where you, the player, can make choices in the first place. The free will you are presented with by games is thus an illusion. And games such as BioShock address this determinism head on. At the end of Contact?, the protagonist eventually turns on the player for making him do things against his will. In Half-Life 2, Dr. Breen questions your motives -- if indeed you have any. As Gordon Freeman, you're just doing what you are told by the designers...and despite the game's messianic treatment of the crowbar-swinging doctor, he, like BioShock's kindly obedient Jack, is nothing but a cipher. The authorial control whose absence Ebert laments in gaming is part and parcel of the medium.