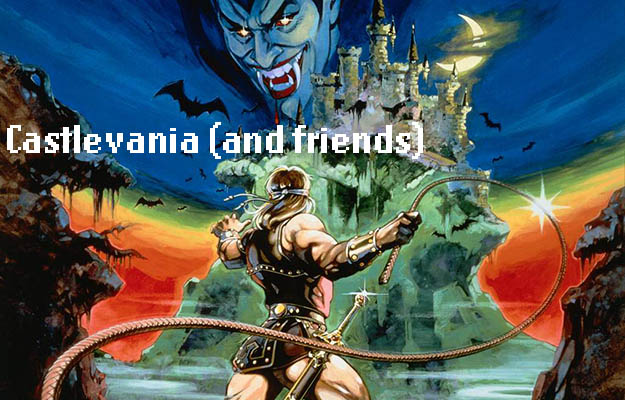 Haunted Castle is greatest curiosity of the Castlevania series: a 1987 arcade translation of the original NES game. After finally (finally) playing the game, I realized that Castlevania just might be the single most remade action game in history. I'm sure there's probably something that outdoes it, but I honestly can't think of a single game that has been completely remade so many times -- not just ports, mind, but whole-cloth recreations.

Of course, the original game is where the whole series started. There was recently a rather lively debate on my personal blog about how silly the whole franchise has become, considering it started off as little more than a loving tribute to classic monster movies and has somehow mutated into a rather straight-faced effort by silver-haired pretty boys to battle vampires. It's like a horrible Ann Rice/DeviantArt mash-up, based around a not-quite-menacing villain whose job is basically to serve as a MacGuffin for exploring twisty castle corridors and has occasionally been depicted as a dude in a badly-designed tuxedo. But hey, whatever -- the gameplay works. Well, most of the time. There are some grim exceptions. (Hint: "3D.")

Plus, Castlevania has something of a permanent iconic status in my brain simply because of how much trouble I went through to find a copy of the NES game back in the day. Nintendo Power's second issue got me all giddy for Castlevania II, which in turn prompted me to track down the original -- a surprisingly tall order, thanks to Nintendo's cruel limited production allotments. I spent an entire summer searching for the game during my family's cross-country vacation, but all without success. The closest I came was a Toys R Us that had the plastic flippy-card for the game, but no purchase slips. Oh, world before eBay, how cold and cruel you were.

A few months later Nintendo finally let Konami produce another run of Castlevania and I quickly snatched up a copy and played the hell out of it. Thank god for unlimited continues, because I can't even begin to guess how many times I had to fight Dracula before I finally finished the game. And on that day, I became a man...provided your definition of "man" is "really adept at enemy pattern recognition."

The Good: Castlevania had some crazy good graphics at the time. And the graphical genius wasn't just in terms of pixel design; whoever crafted the levels actually took the time to make the platforms logical -- something of a first. Whenever there was a hole to leap over, it was clear by looking at the background that the gap was caused by crumbling masonry as the castle rotted with age. (A tradition largely carried over through the course of the series -- check out some of the underground shafts in Symphony? or Dawn?.) And the music was insanely great. And the whip attacks worked wonderfully, as did the secondary weapons, and level designs, and...pretty much everything, actually.

The Bad: Simon Belmont needs a frigging chiropractor. He's all hunched over and kind of hobbles along, which perhaps explains why a simple crow is such a daunting enemy. And it doesn't help that he's about as speedy as a sidewalk-blocking Chinatown granny, which makes for some pretty unhappy gameplay experiences when he gets to later bosses with speedy assistants/weapons, like Death's scythes and the multiply-possessive Frankenstein's...monster's...Igor. Right. Also, once you learn the ins and outs of the game it's kind of weird how short it is.

Contrary to what the Internet may tell you (stupid Internet!), Vampire Killer did not come out before Castlevania, but very shortly afterwards. It is, however, very reasonable to think that the two were created in tandem. Because they look almost completely alike.

They do not, however, play completely alike -- which should be taken as further evidence that Vampire Killer came later. In fact, it serves as a sort of transition between the original Castlevania and Simon's Quest; it's still very much a level-based game, but within each stage the structure is much looser, and it behooves players to collect hearts (a.k.a. moneys) and purchase goods for improved vampire slaying.

The Good: It's like Castlevania with more depth and better graphics.

The Bad: It's on MSX, which means I've only played a little bit of it because MSX emulators on Mac are poop. It also seems difficult, but not in the "cleverly designed platforming challenges" sense of the original game but rather in a "unfairly limited resources and control" sense that makes it Not Very Fun.

I don't want to spoil the big surprise of my import review, but here is a hint:

The Good: Man, that music rocks.

The Bad: Nothing else rocks. At all. Not even slightly.

This was pretty much the reason I bought a Super NES. Those ads in my comics books were taunting me with the promise of a bold Belmont hero on a shiny new adventure, graced with gibberingly amazing graphics. And even early screenshots couldn't prepare me for the technological tour-de-force in store, with a subtle and sometimes eerie soundtrack accompanying monstrous bosses and dizzying Mode 7 graphical effects. Gimmicks? Totally, but they were mind-blowing gimmicks, and that made me feel like my purchase had been totally justified. Even terrible puns (Paula Abghoul and Fred Askare? Screw you, Konami) couldn't ruin this experience.

The Good: Easily the best remake of Castlevania ever, with tons of stages, great graphics and audio, tough gameplay (but not insanely so) and an endless stream of clever ideas. It was almost like Konami was showing off... but since none of my friends had Super NESes at the time, it was kind of like I was showing off, too.

The Bad: Simon's chronic spinal issues were even worse than in the original, turning him into a curiously stiff mannequin whose upper and lower body functioned completely independently of one another. Also, um... yeah, that's about it.

Konami's Castlevania remake for the Sharp X68000 computer was almost awesome. Certainly it had some fine graphics, a stupendous soundtrack, and a handful of exceptionally entertaining setpieces. But it was also ludicrously difficult, to the point that occasionally you'd set down your controller and spend a few long moments contemplating what you had ever done to make the creators hate you so much. The PS1 remake was a bit less daunting, although it did put Simon in a silly leather-and-fur getup that made him look a bit like the marshall of San Francisco's annual pride parade.

The Good: Clever and totally hardcore.

The Bad: A little too hardcore. But it did inspire players to invent creative new cusses, so that's something.