Déjà Vu, despite being the first game in the MacVenture series, is oddly the most refined of the bunch, both in story and in its adherence to modern adventure game principles. The game's premise is a hard-boiled detective story in which you play the role of private dick Ace Harding, who wakes up in a bathroom stall having lost his memory and having either committed or been framed for murder. Originally released for the Mac in 1985, Déjà Vu was the first of Japan's MacVenture ports for Famicom, though for Americans it arrived as the second release -- right after Shadowgate. 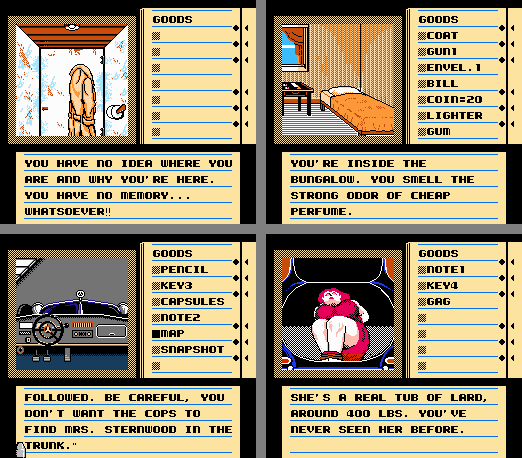 The murder mystery in Déjà Vu, while no better than the pulp novels that inspired it, is leagues better as a story than either Shadowgate or Uninvited. Shadowgate is really little more than a hostile setting in which to solve puzzles; as for Uninvited, while it requires you to learn a bit more background about its environment, your character still feels relatively detached. In contrast, your character is at the heart of the game in Déjà Vu, and that's what makes its story the most compelling. The object of the game isn't to defeat the Big Bad but simply to determine what sort of situation you've landed in. You're attempting to unravel the mystery of who shot Joey Siegel, why you have amnesia, and whether the two are connected. Of course, as in any good pulp mystery, no one is completely innocent. 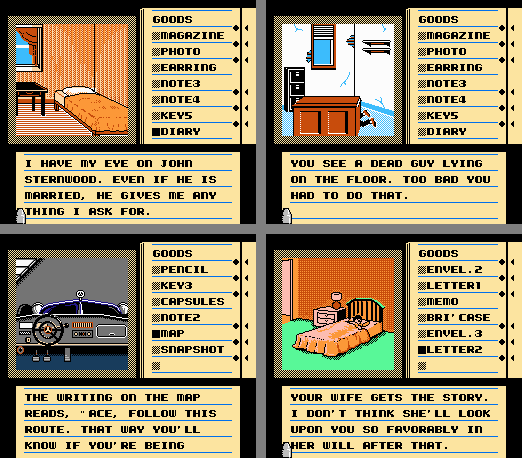 One of the game's more surprising elements is how well it handles the amnesia aspect of the story. Typically a poor story crutch, the reason your character suffers from amnesia here makes perfect sense and even enhances the gameplay. When you first look at items and pictures, your character isn't sure what they are -- often the description simply says that it seems familiar. Later in the game, once you have restored your memory, re-examining these objects may reveal more information and better clue you in to the mystery. 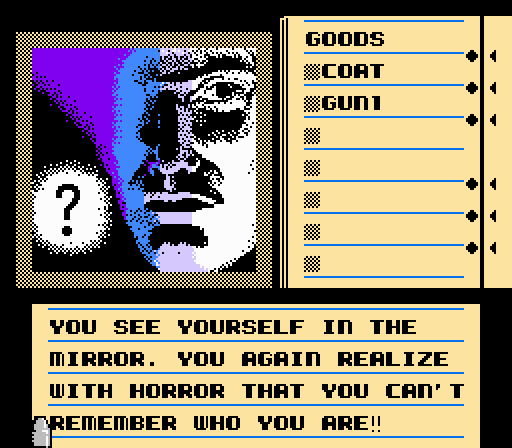 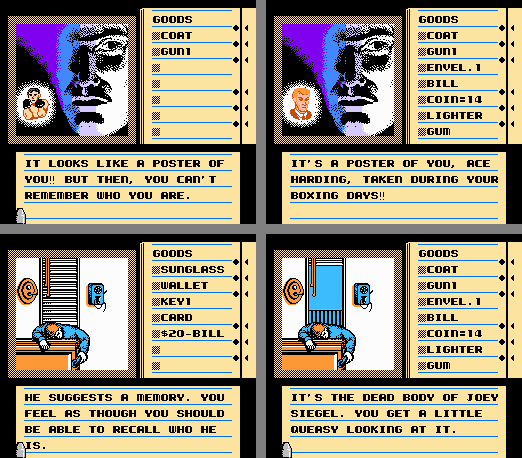 The story alone is strong enough to hold a player's interest, but the puzzles and general game design are what make Déjà Vu stand above its peers. Perhaps this stems from it being the only one of the MacVenture games devoid of the supernatural. But then again, plenty of adventure games -- especially those by LucasArts -- feature supernatural elements and come together well. More likely is that the game's satisfying logical puzzles are the result of its emphasis on actual detective work. The meat of the gameplay rests in collecting items and information and determining what actually happened to you and to the unfortunate murder victim. As it's set in the real world and the story advances though real investigation, you can get through the game by channeling Sam Spade or Philip Marlowe. The game logic really only suffers from one significant flaw -- remember to save before attempting to shoot open a lock and you'll be fine. 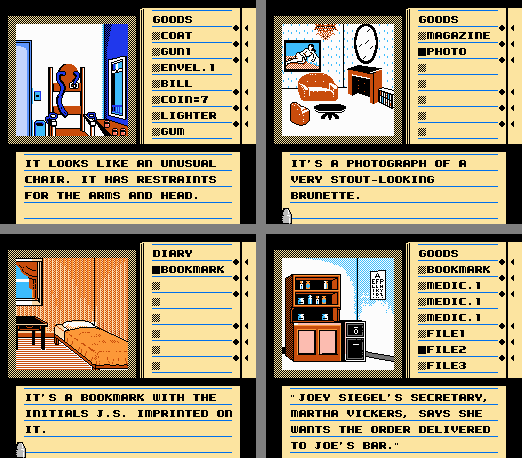 If you can figure out the connection between these things, you are well on your way to solving the mystery

Déjà Vu features far fewer of the instant death scenarios that Shadowgate is famous for. Besides allowing you to inadvertently walk into an open construction pit, the game endeavors to warn you when you're entering a dangerous situation. These clues can be random and may be missed, so it may seem you had no chance -- but at least it tries. Additionally, you learn early on that your character was a boxer, so you can be confident that your fists can get you out of most jams. Even without the help, the Game Over screens -- due to either death or arrest -- are much less common in Déjà Vu than the other MacVenture games. 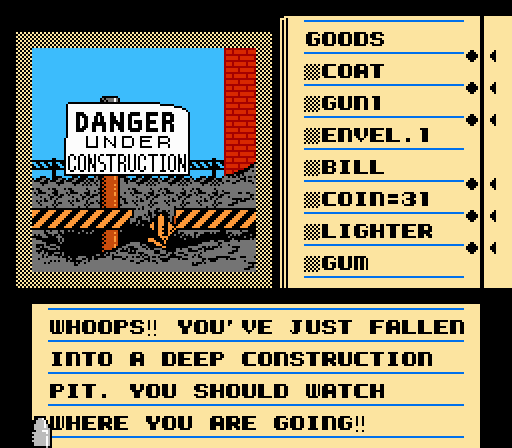 This is the only completely random death in the game. Are we sure it was made by Shadowgate's creators?

Whether these people show up is pure chance, but they could save your life. 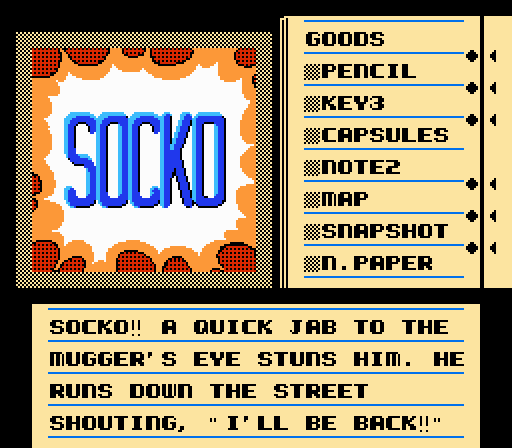 Just like in real life, most problems in Déjà Vu can be solved with violence.

The final difference is that Déjà Vu feels much smaller than the other games, even though your adventure isn't set in just one house or castle. The gimmick in this game is the addresses. Reading certain notes and letters with addresses adds those locations to a special section of your inventory. You can then visit them by hailing a taxi. Besides the starting location, no destination in the game has more than seven rooms. The point of these new places is thus to get in, do what you need, and then head on to the next one. While the tiny locales can feel a bit cramped, the address concept is quite inspired.

Gathering addresses is key to unlocking new portions of the game.

Notably, Déjà Vu features some pretty decent music. Kemco (or whoever was responsible for porting the game over to the NES) added background tunes that were lacking in the MacVenture games' original versions -- generally pretty good music, at that. Shadowgate's is probably the best overall, but Déjà Vu includes two great jazz-inspired themes -- the opening music and the calmer tune the plays throughout much of the game -- that really help contribute to the 1940s-hard-boiled-detective-noir atmosphere. 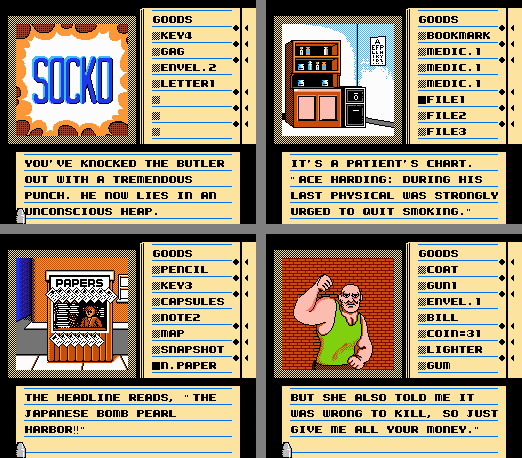 That Shadowgate, not Déjà Vu, is the most enduring of all of the NES MacVenture games says more about Shadowgate's marketing push and fantasy theme than it does of the overall gameplay. Déjà Vu holds up remarkably well today as a graphic adventure in terms of both its story and its puzzles. While far fewer people are familiar with it than with its shadowy sibling, it is really the best of the MacVenture series to have been ported to NES. 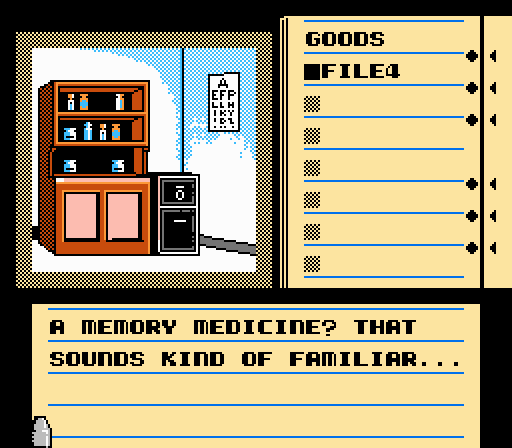 I could never figure out whether this was supposed to be a joke or just poor descriptive text.