Article by Mightyblue | November 28, 2007 | Part of the Final Fantasy series

Twenty years is time enough to see some serious changes in any video game series lucky enough to survive that long. To say nothing of the companies that create them -- for instance, in the space of two decades, Square evolved from a massive RPG-making juggernaut to a victim of its own overwrought and overextended creative vision. Eventually, it merged with its greatest rival to travel onwards to greater success...or at least greater plunderings, anyway. And the key to both its greatest victories and its most devastating travails was a little game called Final Fantasy.

For a game that started one of the industry's greatest dynasties, there's not a whole lot to the original Final Fantasy. Its title is a laughable misnomer today, but it was deadly serious back in 1987. In those days, Square was more or less a budget production house whose specialty lay in lousy Famicom Disc System games and mediocre first person-dungeon hacks. (Think an ultra-primitive version of Etrian Odyssey and you'd be pretty close.) The series in question was called Deep Dungeon -- a name that's survived in various forms and thus might actually be vaguely familiar to Final Fantasy fans -- and it sold poorly enough that Square's "A-Team" was tasked with the creation of a new RPG. The rub here is that it couldn't simply be a Dragon Quest clone, as Japan was already eyeballs-deep in those, and this game needed to stand out. To stand out, and to sell...otherwise the company would be nothing but a fond memory.

Luckily for them, extreme desperation has a funny way of fostering creativity. 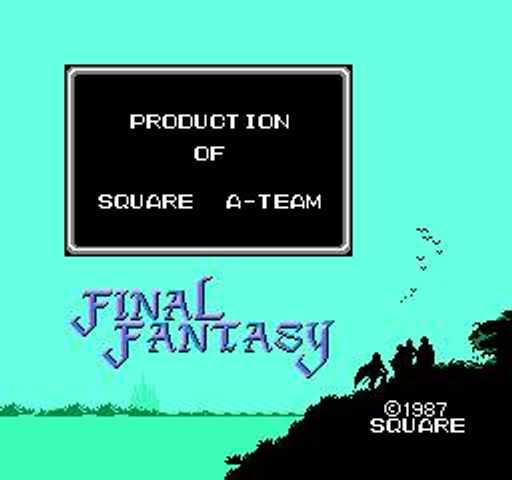 So rather than bite off Dragon Quest, Square's creators instead shamelessly stole wholesale from Dungeons & Dragons. Everything from basic gameplay concepts to the much of the bestiary was taken whole-cloth from the seminal table-top RPG, creating a collection of combat and bad guys that remain iconic to this day...and tend to be a real head-scratcher for tabletop RPG fans who find themselves bemused by the numerous "similarities" between the two games. Curious, TSR (who owned Dungeons & Dragons at the time) declined to pursue the game's obvious creative infringements, thus clearing the path for Final Fantasy's ascent into gaming history.

Final Fantasy's most important contributions to its descendants are twofold: its bestiary and its class system, both of which are constantly referenced in some form or another by practically every chapter of the series. The class system in particular was remarkable as a a change from the norm in Japanese RPGs, which rarely allowed players to choose between distinct classes with equally distinct abilities. Classes wouldn't appear in Dragon Quest until the series's third installment?, which didn't arrive until a year after Final Fantasy. Probably not a coincidence, actually.

And so Final Fantasy was a breath of fresh air for the series. 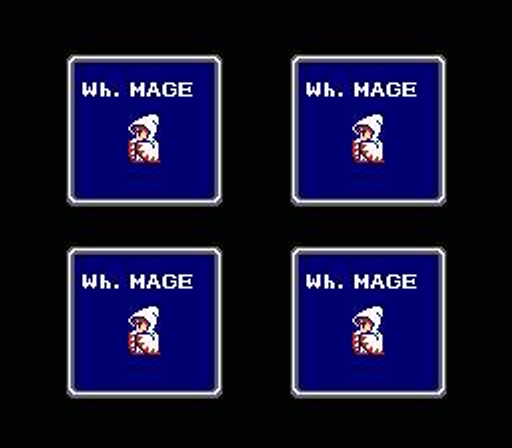 I'd dare you to use an all-mage party, but needless human suffering has lost its charm for me.

Maybe not at first glance, though. On the field and town maps, things look to be pretty much the same as in any RPG of the era. Most modern ones, too, for that matter. You can run around and enter various shops and buildings, talk to townsfolk using the handy-dandy context-sensitive A button -- an important innovation over Dragon Quest, with its slew of commands for every situation -- and find all sorts of way to go broke quickly...and somewhat agonizingly. "Agonizing," that is, because earning money in Final Fantasy is a grueling experience due to the general difficulty level, the poor cash handouts from defeated monsters, and the extremely high prices that equipment and magic carry. (Buying stuff is no picnic, either, since you have to purchase items one at a time.)

Which brings us to combat in this lumbering old battleship -- and lumbering it is. Combat in the NES Final Fantasy games is strictly turn-based, with everyone's turn order determined by agility ratings, or occasionally simply how vicious the game is feeling. You have your usual slew of Fight, Run, Eat, Drink, and Sleep commands or whatever, and once you pick out your targets you set about toasting and bashing monsters repeatedly until one or the other party falls over dead. In the tougher sections, this will be your party until you do some significant grinding; the difficulty level in the original NES version often verges on cruel and unusual. To make matters worse, several of the most important healing magics can't be used in battle, namely the reviving spells and the de-petrifying spell. Oh, and if you kill a monster, your characters don't automatically retarget a new monster. They stab at thin air. Because that's how all legendary warriors go about fighting.

This all adds up into some extremely long battles, but hey, at least the music's not bad. 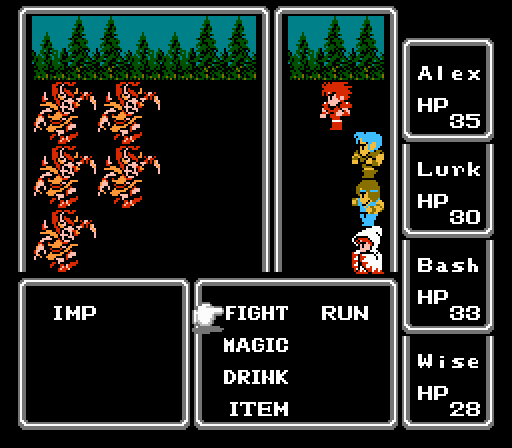 "The characters' lack of personality meant I ended up naming them for their most
salient abilities -- Fight, Steal, Punch, Magic." - Game Informer's FFI review, 1990

Nobuo Uematsu is one of gamedom's favored music masters, and his reputation began its ascendency here. Final Fantasy's soundtrack is perhaps more excellent than the game itself (admittedly not a hard task after twenty years of eveolution in the genre). With simple beeps and boops, Uematsu created some extremely stirring and even kind of beautiful music. Perhaps due to the emphasis on the music, there's not really a whole lot to the game's sound effects -- just some minor hitting and magic sounds. The battle system features some actual visuals of your party duking it out, unlike the first-person view of the enemy lineup common to the Dragon Quest clones of the day, so visuals shore up the audio's weaknesses.

All in all, Final Fantasy a little like that old Cadillac that sits under a tarp in your dad's garage: a sort of memoir to the simpler days when men were men and didn't mind developing a repetitive stress injury from buying a few dozen potions, one at a time.

Does that mean Final Fantasy is a particularly good game by today's standards? Not really, but it doesn't have to be. Final Fantasy is a rough draft for the series, a place to look back and see the sketched-in outlines that would eventually be filled in with summons and Chocobos and ridiculous spells and zippers and spin-offs and cinematic aspirations and visual wizardry and all the other little gimmicks that have become the series's hallmarks. Because once upon a time, there really was a "final" Fantasy.

Thanks to GameFAQs and GameSpot for the screens