Article by wumpwoast | November 28, 2007 | Part of the Final Fantasy series 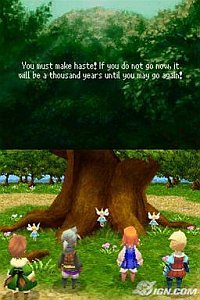 Final Fantasy: at worst, the name embodies a long-running brand of mostly unrelated role-playing video games. At best, it continues to be the height of marketing irony.

Even in 1990, on the eve of Final Fantasy III's release in Japan, folks recognized that "Final" was a curiously intangible description, possibly reassuring players that after some twenty-plus hours of play, the game would indeed "finally" be over. "Fantasy" is a little easier to work with -- we can construe that the game will contain a wholly predictable epic saga with elements of medieval combat, arcane magics, dragons, a mentally unstable and nihilistic arch-villain, and busty elves with an insatiable and everlasting sex drive.

And while Final Fantasy III honorably sticks to most of the criteria above (except, tragically, the bit about the elves), it adds a level of freedom and consequence that eventually massacres any impression of "Fantasy" the player might have. It begins innocently enough -- to fully participate in your tale of senseless and heroic violence, each of the four members in your party must be given a "job." You're free to decide what to do with your life -- you can major in such fields as healing magics, attack magics, kung fu, business management, and accounting. And let us not forget our Arthurian knight with holy sword and shield, since presumably that was the driving reason you purchased a game with the word "Fantasy" in the title.

These bog-standard jobs in Final Fantasy III are actually quite fun. Keep a monk in your party for most of the game, and you'll eventually be attacking with a flurry of sixty-four punches every turn -- when Random Evil Goblin whacks you with his little stick and you return the favor with a full dose of concentrated whoop-ass, you can't help but feel deeply satisfied. All fighting classes may wield a single weapon in each hand, so this means your higher-level knight will sometimes unleash twelve sword slashes in a single attack. Rounded out with mages and thieves, you begin the game with all six original classes from the first Final Fantasy -- and they're all seriously improved. 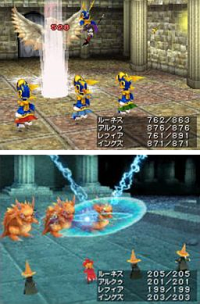 Square had a big heart though, and in creating Final Fantasy III, they laid out most of the conventions people take for granted in later Final Fantasy games. They're all here, in their embryonic forms -- Moogles, the summon monsters (Bahamut, Leviathan, and family), dark knights, dragoons, bards, scholars, archers, ninjas, geomancers, and tons more. Those of you who grew up playing Final Fantasy on SNES and PlayStation probably know what all of these are, and would be perfectly comfortable dealing with them in their elderly context. Lucky for you, then -- in its original Famicom incarnation, FFIII explains none of these additions in any meaningful detail whatsoever.

So what we're left with resembles the odd jobs you might have worked in high school -- try some out for a few months, learn a few tricks of the trade, and see which ones stick with you most. Now, class, raise your hand if you want to spend two hours with scholars and bards in your party just so you can figure out what the hell they're good for. Don't face any bosses or make any story progress, mind you -- your bard with apprentice-level job skills and no available class-specific equipment is not about to defeat Odin using the power of song. Or perhaps you'd like to visit the Cave of Tides and have your scholar read Mr. Kraken a story from your Book of Lightning... That sounds like a winning strategy, right? (Actually, it is.) 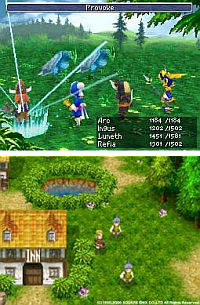 Thanks to these bizarre new "jobs," our "fantasy" world suddenly feels too much like a cashier position at Safeway. You work for peanuts until you've been there three months and can join the union. Yes, it's fun and extremely satisfying to stumble upon a particular combination of jobs that works marvelously in a given situation. But you'll spend many hours experimenting and dying just to obtain those precious sparks of hubris.

Future games in the series (particularly Final Fantasy IV and Final Fantasy VI) avoided this existential trauma by introducing characters that inherently possessed these special bard-like or mage-like qualities. Under the auspices of story and plot development, these games provided specific battles or dungeons that would gently prod you into learning your new characters and exploring their abilities. By contrast, FFIII is wide-open, with no gentle hand-holding areas, and many of your decisions now are liable to make you miserable later. Just like real life.

So the drive to stick with a basic party of healer, attackers, and wizard is a strong one. Go with what works, you might think. But the game mercilessly punishes you for not figuring out the optimal group for a given dungeon. How many folks would guess that a geomancer would be the best person to send deep into an underwater cave, even if you did know that he uses the environment as his weapon? It just so turns out that in swamps and underwater areas, the "terrain" attack is either an instant-kill whirlpool or a massive tidal wave, neither of which cost any magic points and both of which rival your black mage's strongest attack spells. 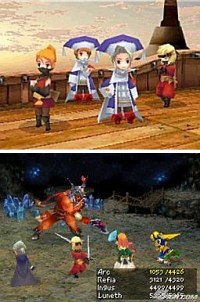 Final Fantasy III carries a certain interior logic that takes time to unravel, with a dense web of creative and lateral thinking behind its hidden rules and secrets. It's not enough to merely perfect your battle tactics, always heal when necessary, carry the right status-ailment items, or accurately guess the elemental weaknesses of your foes. Playing this game without a FAQ requires the player to think like an underpaid, overworked Square developer, map designer, or scenario writer. At one point, it is the slightest irregular peninsula that "points" the player towards one of three tiny landmasses in a world nearly totally submerged underwater. But you'll have to explore even to find that island that gives you the first clue.

For those players who find enjoyment in playing a game just to learn its rules, or exploring and discovering how to subvert their own instincts about how best to defeat an enemy or boss, Final Fantasy III may be the pinnacle of the series. But even the strongest imagination will be laid bare far before this game is over, replaced with a finely-honed instinct for survival -- "How do I make it out of this dungeon without dying?"

Final Fantasy III is a trite fantasy, certainly not the final word in quality RPGs...but any sufficiently patient, socially-awkward gamer will be proud to finish the game and watch the credits roll.

Thanks to IGN, Generation NT, N-Philes, PC INpact, FFOdyssey, and Square Enix for the pictures.