Final Fantasy IV has it rough these days. Usually, you'll find it hanging out in the corner with Final Fantasy VII, lamenting its status as a "has-been."

Like its next-gen sibling, FFIV was nothing short of groundbreaking in its day. It was both a sterling example of the Super Nintendo's graphical prowess and the dawn of a new era in console role-playing games. It set standards still in place today and established gameplay mechanics that have only in recent years been forsaken by the genre altogether. 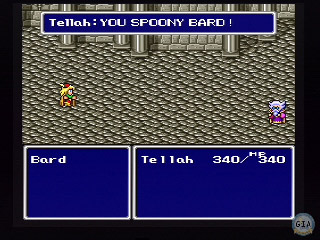 As the original zany video game quote, this screenshot is mandatory by law.

Also similar to FFVII, the game has become something of a victim of hindsight. In recent years, more players have called foul on its lame story, antiquated gameplay, and poorly-aged visuals. While it hasn't had to weather the same level of retroactive scorn as, say, Metal Gear Solid 2, it's not too much of a stretch to say that FFIV doesn't command quite the fanbase it did even a few years ago.

The complaints frequently leveled against it aren't entirely without merit, especially for American gamers. For nearly a decade, the game's plot lay suffocated beneath a garbled, incoherent localization. When it finally did receive a somewhat understandable retranslation as part of 2001's 'Final Fantasy Chronicles, fans who had long been convinced that a deep, compelling story lurked beneath the nonsense instead found a pretty straightforward tale, lacking much in the way of originality or even integrity. After all, three quarters of the game's playable cast? appear to nobly sacrifice themselves or otherwise die at various points in the game, only to be be actually alive and well by game's end. And even then, the one character who actually does kick the bucket appears in spirit, Obi-Wan style, in the final battle.

The gameplay straddles the line between hardcore (read: challenging due to primitive design) 8-bit sensibilities while also setting standards for the generations to come. The series's Active Time Battle system made its debut here, adding a welcome dose of dynamism to turn-based combat by staggering and mixing the party's command input according to each one's speed stats. ATB would go on to become a series mainstay for nearly a decade. Yet as crucial and important an advancement as this was, the influence of its NES brethren can't be ignored. High random encounter rates and level-grinding, particularly in the endgame, are the order of the day -- two deal-breaking banes of the modern RPG fan. 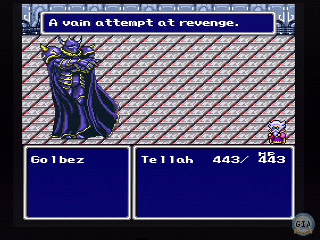 Visuals that were jaw-dropping back in 1991 seem gimmicky today. The SNES was capable of some impressive visual tricks for the time, and early in the system's life, developers were determined to use as many of them as possible whenever and wherever they could. The fake 3D effect can't hide the fact that the overworld is painfully spartan, going with a decidedly 8-bit-on-steroids look. The little character sprites that scurry about the game world aren't too far removed from those seen back in 1987, either, completing the entire decidedly dated look-and-feel package.

So, FFIV is over the hill. A classic that, despite its place and importance, has not weathered the test of time.

Final Fantasy IV's story doesn't offer anything original, but it doesn't pretend to. It is a fairly by-the-numbers tale of good overcoming evil, and it revels in its own simplicity by playing up the melodrama. What story exists is competently told -- Americans should look to the Game Boy Advance version for the optimum localization -- and so briskly paced that it never drags. Cecil's path from darkness to redemption is arguably one of the finest plot strings in the franchise, inelegant though it may be. Each and every one of the sacrifices the characters make is gut-wrenching for first-time players.

It nearly shattered me the first time I saw Palom and Porom turn themselves to stone to save their compatriots, or when Yang sacrificed himself to save the Dwarven kingdom from the Tower of Bab-il's mega cannon. When they came back none worse for the wear near the game's end, my thought was not, "Well, that's stupid," but rather, "Hell yes!" Looking back, yeah, it's corny, but compare it to the story in pretty much any console game at the time and it looks like art. Besides, ultimately, the way the whole gang gets back together to deliver a decisive blow against the bad guys is far more satisfying. And honestly, is it so bad to have a happy ending where all the good guys live? 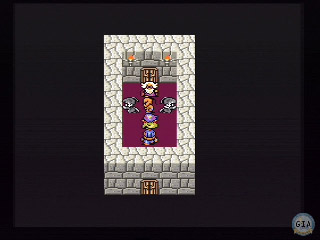 This scene broke my heart as a child.

The only significant complaint about the game's plot is hardly unique to FFIV. The series at large has a frequent and very annoying tendency to introduce a game's real villain with only a couple of hours left to spare -- sometimes even less. In this regard, FFIV is more than happy to oblige, springing the final baddie on the player at the final hour, forcing the player to switch gears and consider that the evil, ruthless Golbez might, in fact, not be such a bad guy after all.

Look past -- or rather in between -- the random encounters, and one will find a battle system that still plays as well as it ever did...even if it does feel rudimentary in this day and age of Gambit systems and Active Dimension Battles and faster-paced, real-time combat. There's a reason why the ATB system saw regular use up though 2000's Final Fantasy IX? and was brought back in '03 for Final Fantasy X-2: Although simple, it's extraordinarily well-designed, extremely versatile, and most importantly, pretty fun to play. FFIV even treads territory that few RPGs of its kind has since: While early Final Fantasy games featured a four-man party and, ultimately, a three-man group became the standard, FFIV stands alone as the odd man out, featuring groups of up to five playable characters. Since then, only Final Fantasy XI? and Final Fantasy Tactics? have strayed from the chosen path, featuring large parties. 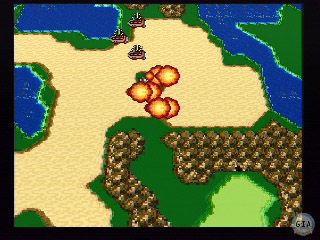 This was pretty damn cool back in 1991. I promise.

Additionally, the game's battles are one of the few places where the visuals do hold up. The crazy Mode 7 antics of the overworld may not have aged well, but the battles feature greener pastures of quality. Though unanimated, the monster sprites are colorful and sport lots of detail in the Yoshitaka Amano style. The tiny, squatty sprites of your heroes scurrying about town turn into fully-realized, well-designed characters in the heat of battle. Spell animations often fill the screen, but rarely cause any slowdown, at least not in the game's original format. (Sadly, the same cannot be said of subsequent releases.)

Equally enduring is is its sound design. Nobuo Uematsu, the sole maestro for the series's first nine games, graced FFIV with what was not only his greatest achievement up to that point, but a set of themes that remains one of his finest works to date. Each piece is masterfully composed, fitting each scene perfectly, and traditional recurring pieces like "The Prelude" and the titular "Final Fantasy" enjoy their respective definitive renditions here. I can still recall the chill that went down my spine the first time I heard "Dancing Calbrena," or how much "The Land of Summons" added to its locale's mystique. While Uematsu and other composers worked some serious magic with the NES to amazing effect, early 16-bit forerunners like FFIV helped music in games truly come into its own. 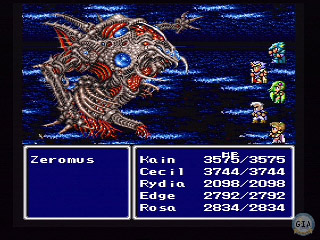 At least it doesn't have angel wings.

And so the game sits in it's bizarre crack: An essential classic of the genre that has, despite it's enduring quality, faded somewhat from relevance and grace. Fortunately for us (and for Square, who insist on repeatedly rehashing old material), the DS remake? goes a long way to show that "old" doesn't have to mean "outdated".

Images courtesy of the defunct GIA