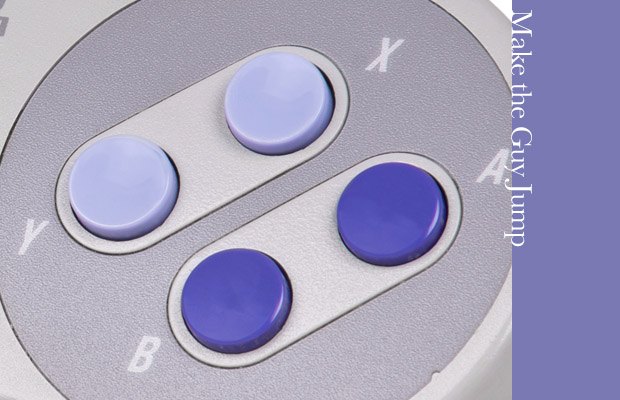 Videogame controllers. We all have a bunch of them lying around. They used to have wires we would trip on; now they just get lost in our couch cushions instead. Have you ever really thought of why everything on a controller is where it is? No? Youre in the same boat as the people who designed many of them. Really, only two console controllers have been thoughtfully designed in the history of the industry. Everyone else has just been tweaking them.

In the beginning there was... well, a whole bunch of weirdness, quite frankly. Old-school arcade games never really needed more than a directional input and a single button, at most. Most games went the obvious route and gave you one big button next to a stick with a ball on it, and occasionally a separate Start button for some odd reason. This design has endured. Over the years, more buttons have just been haphazardly added in there for more complicated games. Since a stick and a button looks drab, people thought up all sorts of goofy alternatives for particular games. Track balls, car interiors complete with wheel and pedals, even big awkward flight sticks with triggers on the back. Someone once pitched the idea to offset the inherently phallic nature of joysticks by designing a game to be played by groping a giant pair of rubber boobs. It was a gimmicky time.

The first consoles couldnt quite follow suit for reasons of cost. A proper arcade joystick has an awful lot of tension to it, jumping straight back to how it started as soon as you stop pushing on it. Atari tried to imitate this by giving you a stick and a button on a brick, but it was all cheap plastic and rubber, making controls sluggish. This fit the quality of the ports, but still. The Intellivision ignored the sensible route, chopped the number pad off a computer keyboard, stuck a couple of hard-to-press buttons on the side, and then added a large circular button to the bottom to serve as a D-pad. Atari followed by creating what is generally agreed to be the worst controller ever shipped with a console by sticking a barely functioning joystick on to an Intellivision controller and using rubber to replace all the moving parts to ensure nothing would be responsive for the 5200.

Eventually, the NES came along to bring us all some sanity. Rather than try and add a cheap joystick, Nintendo offered the first instance of a proper D-pad, something that had worked wonders for the Game and Watch line. Games were getting a little more complex, so an extra button was tossed on, too. For good measure, they threw in two out-f-the-way mini-buttons in the center, for anything people might want to do occasionally but which would grow annoying if you kept hitting them accidentally. Since there was a lot less going on inside the controller mechanically, it didnt have to be a big, heavy brick you needed to support with your right hand like those which came before. This lead to a stroke of total genius. The D-pad was set at the far left, and the two buttons on the far right, allowing for this radical alternate operation method where you could hold the controller in both hands like a book and hit all the buttons with your thumbs. This was a little tricky, as it left the more frequently used A button under the joint of the thumb, and the secondary B button under the tip, but with a little practice, it was much more comfortable and far practical than laying the thing on a table. Plus, it was essentially indestructible. It was a wonderful piece of engineering everyone else began copying as best as they could without incurring a lawsuit.

With Genesis, Sega at least made an attempt to be different. They made the whole thing all big and wing-shaped to be vaguely futuristic, and they slid Select over by A and B so people could use it as a proper button. Oddly enough, though, aside from the odd brawler that was hard up for a new button, nobody ever used it. The vast majority of games just made it a spare A button; the most popular series on the system essentially used all three as A buttons.

Eventually, Nintendo came along to put some thought into things again. They started by rounding off the corners and tilting the buttons up at a more ergonomically friendly angle, and went one better by making A convex while keeping B concave, really fitting the contours of the thumb. In concession to the emerging notion that two buttons was no longer sufficient, they tossed in an extra button just a little above B where one could pivot the thumb to use it as an alternative for, say, firing missiles instead of regular shots. Doing Sega one better, they added a spare A button, too, so game designers could have players shift their whole thumb up. In order to avoid confusion, this new button was labelled A, the old A became B, leaving them familiar in name and location for long-held A for yes, B for no standards. The two fire buttons then became Y and X. As a bonus, the resulting cross formation lent a symmetry to the whole controller which lent itself to emulating the double-joystick multidirectional shooting setup of arcade games like Robotron and Cloak & Dagger. Then in a brilliant move, they added yet another pair of new buttons to the upper edge of the controller, labeled L and R, to be operated with the index fingers which tend to float up there anyway. These could easily be hit or held without changing anything about what ones thumbs were busy with and inspired developers to try weird new things like panning cameras, angling shots, and adding page skip shortcuts to menu-heavy games. The whole thing was so unbelievably useful and comfortable that nothing could ever feel more natural.

Eventually, a new generation of systems eventually saw release, and we just had to start messing with it. The Saturn at least took the honest approach by doing everything to the Genesis controller that the SNES had done to that of the NES. Sony on the other hand just flat out stole the design, and panicked about how to make it distinct. First, they decided to change the overall shape with some elongated hand grips. Conical hand grips, set at an unnaturally wide angle that necessitates a spread-elbowed stance to keep pressure off the wrists. Then, following the trend of button doubling, they added a second pair of shoulder triggers which could only be hit by shifting ones index fingers up and down or bringing the middle fingers up as well, leaving the bulkier controller supported only by two fingers. Finally, they relabeled the buttons, not with letters or numbers but with three shapes and an X for the SNES B. Sony of America made this all the more awkward by arbitrarily mandating games have the functions of the O and X buttons flipped for U.S. releases, not only breaking the long-held universal tradition of A for yes, B for no, but the tradition of circle for yes, X for no as well.

Then came analog sticks. The N64 started it off by replacing the D-pad and L button with a thumb stick and bottom mounted trigger, but hedging their bets by gluing the old left half of the controller on to the side of the new one like some half-formed conjoined twin, throwing the weight off for no real gain. Everyone else, upon realizing the appeal, began simply adding sticks to old controller designs, sometimes displacing the D-pad, sometimes hanging off the bottom. Generally speaking the next several controllers to hit the market began a trend of looking more and more like a standard SNES controller with joysticks stuck onto it until finally Nintendo released the Classic Controller: a Super NES controller with two analog sticks. Its the only optional peripheral for any system to see widespread support from third party developers, because its really what we all want to keep using anyway.