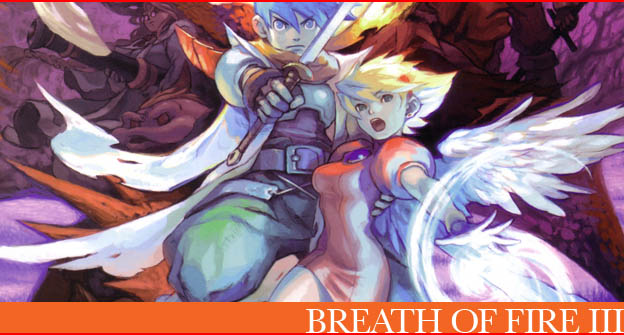 Keep in mind that everyone is entitled to a bit of melodrama from time to time when I say that I first played Breath of Fire III during the summer that marked my childhoods end. Capcoms third entry in the saga of the Dragon Clan hit North America in 1998, which, quite coincidentally, was the same year I turned 18.

No time was wasted with my induction. Welcome to adulthood! Life said, handing me a gift basket containing new worries about romance and post-secondary education, as well as a license to drink behind my parents backs. Remember that care-free summer vacation you had last year? Kiss it goodbye, cause its time to put on your big girl pants!

Though I went into the job fairly knowledgeable about animal care, that pet store stint marked my first soul-shattering experience with animals being bred and sold purely for thousands of dollars in profit. This resulted in the mass production, shipping, and sale of hot topic dogs, which, during my time in the joint, included a lot of dalmatians (thank you, Disney) and a lot of chihuahuas (thank you, Taco Bell). Few of these dogs were well-bred, and all of them were taken from their mothers the second they were weaned so that they could be sold at their smallest, cutest phase. Most of them also endured long drives up to Canada from the United States, and arrived sickly, vulnerable, and dehydrated. 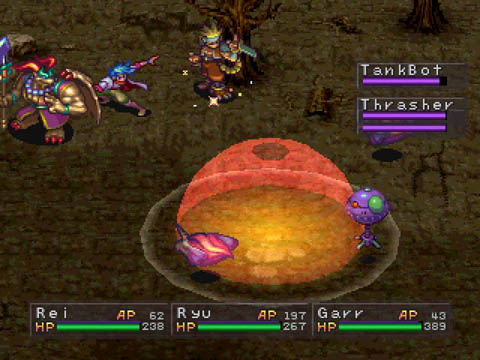 My first job every morning was to make sure the puppies were all still with us. Not all of them made it. The song doesnt lie. Dead puppies arent much fun.

It was a wretched summer, but it would come to a happy end over two decades later when the store was pushed out of the shopping center to make room for a luxury clothing store. At some point in between, I learned the small pleasure of buying video games with money that Id earned with my own hands. This is how I came to play Breath of Fire III, and its also why I embraced the game: I needed something to curl up with on my rare days off, something to remind me that the world still had traces of color and magic that dont dissolve simply because someone slams a switch on your back marked ADULT and declares that you cannot shirk your responsibilities for any reason, under any circumstances.

My first playthrough of Breath of Fire III was like a salve. Its an easygoing game that unfolds like a story book and encourages you to meander at your own pace. After all, the mission thats been heaped upon the main character, Ryu, is to find God and ask Him about the meaning of existence. Thats not the kind of kind of job that gets done in one afternoon.

I let Breath of Fire III guide me through the summer. I camped with Ryu and his friends, and listened to the night life that chuckled outside the perimeter of the campfires light. I played the fishing mini-game, and landed everything from minnows to whales. I crossed the desert, somehow, found God, and asked Her (!) what Her deal was. 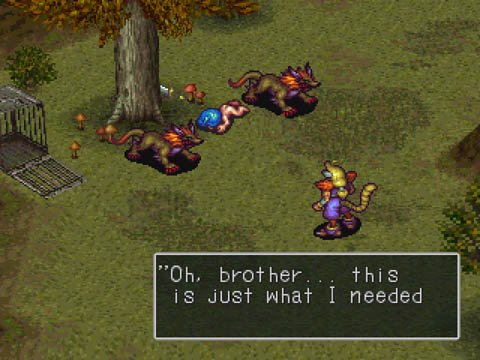 She told me. And years passed, and I forgot about my conversation with God. So I decided to play Breath of Fire III again, and re-evaluate it as a game instead of a security blanket.

The first thing that you notice about Breath of Fire III is that its a joyful-looking adventure, even though it begins with its dragon-boy protagonist, Ryu, roasting a whack of miners for trying to put picks and hammers through his little lizard skull. The games big, bright sprites are beautifully animated and imbued with personality and spirit. That goes for the games main cast and its non-player characters: Farmers thresh their fields, travelers consult with their companions, merchants trade, and dogs fish for their pet cats (its complicated). Breath of Fire III is 15 years old, and it doesnt look dated in the least. It makes you homesick for the 16- and- 32-bit era, when JRPGs seemed to be at their brightest.

In fact, the games aesthetics in general inspire whimsy. One of the nicest surprises I received from replaying Breath of Fire III is the realization that it has a lovely soundtrack. Not every tune is a winner; the games green forest theme is an uninspired rip-off of Chrono Triggers own forest theme, and the latter sounds far richer despite being confined to a cartridge. Otherwise, Breath of Fire IIIs jazzy music merits a second listen. Its easy to miss unless you make the effort to listen to it, so if epic 16-bit RPG scores are still rattling your eardrums, give your canals a good flush before settling down to play. 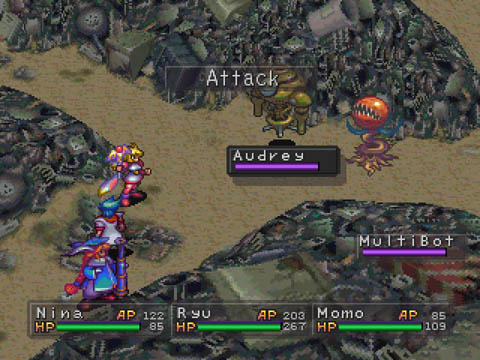 But how long will you actually play for? Breath of Fire III looks great, it sounds good, and it tries very hard. However, having replayed it as an honest-to-goodness adult (as opposed to a girl who was told it was time to be an adult), I cant deny that the game is ridiculous at times.

The high random encounter rates are a big problem, though the wonderful enemy animations help soothe the ache. Besides, random encounters were still forgivable in 1998. Less forgivable are inane block-pushing puzzles that dont quite work because your characters control so loosely on the field and lack a sense of weight (curse you, Angel Tower). The endless sidequests are worse, particularly a long, stupid journey for shishu ingredients that have to be stuffed down the idiot gob of an idiot mayor who wants the food for idiot reasons.

Its been a long time since Ryu and his friends first helped me through the Summer of the Dead Dogs, and I will always love them for that. I will also forever be in love with Breath of Fire IIIs graphics, its over-exuberance, its dragons, and its were-tigers. Unfortunately, the truth is that I got that sinking feeling once too often when I re-visited the games dungeons.

Ugh, God, I said over and over, I remember this friggin place.