Company of Heroes is a damned fine game. There is really no valid discussion to the contrary.

In 2006, when developer Relic released its World War II-themed masterpiece, it drew critical acclaim from all sectors. It won multiple Game of the Year awards from various outlets. According to a 2010 article on MetaCritic.com, Company of Heroes is the second best-rated strategy game of all time.

Despite all of these accolades, I have avoided this game for the past five years.

My love of strategy games is no secret. Publicly, I have written overwrought missives confirming this for this very publication. Privately, Im certain my wife would be more than happy to bend your ear about household chores I have postponed in favor of more time with the latest Civilization or Total War.

As such, it seems that Company of Heroes and I should go together splendidly. I find it something of a personal failing that we did not.

When I first encountered Company of Heroes, I was in the throes of my time spent with one of my favorite real-time strategy games of all time: Age of Empires III. Empires III had me firmly enraptured with teasing out every nuance of its gameplay. It was an update to a classic formula: Familiar to veterans, with a sheen of polish to smooth out the rough spots. While time and critics have been much less kind to Empires III than Heroes, at the time I felt it set the gold standard.

Coincidentally, Heroes eschewed the traditional RTS model in favor of a true, modern evolution of the genre. The game played faster, focused on small unit tactics and territory control while downplaying resource gathering and meticulous base construction. In short, it was an antithesis to everything I was enjoying about Empires III. 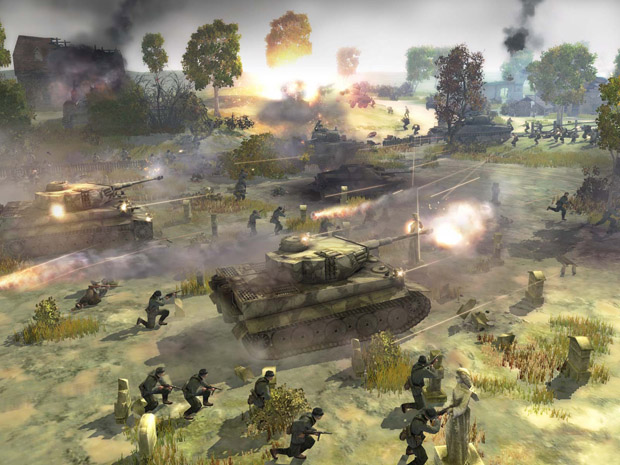 A typical game of III will play out very much like RTS games have since the early 90s. A player will begin with a small settlement and some resource-gathering units. That player will start building basic structures and sending units to gather more resources from depletable sources. Eventually, the player will begin to construct more advanced structures and combat units, with the ultimate goal being the destruction of the enemy base. Skirmishes may be fought in the areas between bases, but most combat tends to happen in or around the towns.

Typical sessions of Heroes play out in a similar structure, but with notable changes that make the experience feel very different. Units are produced in groups rather than individually, and this leads to armies that swell very quickly. Terrain is destructible and offers varying degrees of defense depending on where units take cover while in a fire fight. Proper choice of cover gives combat a very tactical feel.

While Heroes continues to require resource-gathering, they are received from control points that do not deplete or require units to be assigned to them. Additionally, for resources to be received from these points, they have to be connected to the players base via other owned zones. This requirement of territory control actually influences the largest difference in Heroes modern RTS gameplay.

Since players must creep outward in a contiguous order to gain resources, each new control point inevitably draws the opposing sides closer to combat. As such, these points each become hotbeds of fighting, with the ever-evolving landscape around them providing strategic puzzles that must be cracked in order to successfully assault or defend the positions. It is a fantastically organic approach to strategy.

Combat is fast, messy, and highly evocative of the World War II setting. Weapons and units all function as youd expect they would. Heavy vehicles can bust through walls and defensive structures, drastically changing the landscape. Buildings blow apart magnificently under fire. There is much and more to like about this game.

Yet for all of my praise, Company of Heroes and I remain some cool distance apart. We are like bodies orbiting each other in space, always in each others periphery, yet never touching. Im not going to pretend to understand it. The flaw is clearly with me, and who amongst us can say we really understand ourselves? I gave it an honest try, even replaying all of the painfully simple tutorial missions to make sure I hadnt missed some kind of salient feature that kept me from fully understand its new and modern ways the first time I played it.

But no, all was for naught. I remain awed but not engaged by Company of Heroes. My hat is off to Relic, for they crafted a fantastic game. Yet when I play that game, I feel like an ape presented with the Sistine Chapel: I understand its grandeur, but the true accomplishment of the thing simply eludes me.