Aforward-scrolling rail shooter much in the same vein as Segas Space Harrier. Though published in North America by Acclaim, 3-D World Runner was actually developed by Square, and was their first game to be released in the US. The 3-D refers not only to the games spherical presentation, but also to the games 3D mode, which allowed the player to experience the game in 3D by using the included glasses. It shares this feature with two other games: the Famicom-only sequel JJ and Rad Racer, another early pre-Final Fantasy Square game for the NES. -- Luke Osterritter 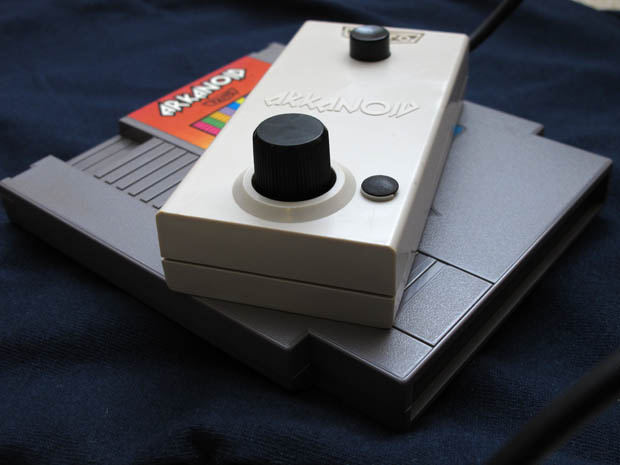 "Esoteric" would be a kind way to describe this absolutely baffling adventure game. Following in the tradition of Namcos Tower of Druaga, Deadly Towers had a concrete goal and a functioning inventory and skill system... but both were obscured behind an opaque interface, unforgiving design, and some real amateur-hour programming. Theres an interesting game buried in here, but youd be forgiven for not having the patience to dig it out. -- Jeremy Parish

Gradius NES port was hardly the only rendition of the arcade shooter Konami cranked out in the mid-80s, but it was this iteration of the series that made it a classic. The thoughtful gameplay -- eschewing strict pattern memorization in favor of dynamic strategies revolving around the progressive power-up format -- resonated with NES gamers in a way few other of the systems shooters did. Shooting the core became a favorite pastime, even if we American fans were screwed out of the sequel. -- Jeremy Parish

Of all the Mario-inspired platformers to arrive in the wake of the NES, Hudsons Adventure Island was one of the most transparent (what with its eight worlds with four levels apiece), yet it was probably the most popular, too. While unreasonably difficult in places, Adventure Island did have its heart in the right place. The sequels were considerably improved, but for some reason we never saw the best of them in the U.S. -- Jeremy Parish

The NES adaptation of SNKs popular arcade shooter was doomed from the start, since the systems D-pad couldnt begin replicate the coin-ops unique controls. But then SNK entrusted its programming to the hacks at Micronics, ensuring a glitchy, unbalanced, practically unplayable disaster of a game. Even the liberal abuse of an infinite continue code couldnt ensure victory in a game where youd sometimes spawn, invincibly, in the scenery. Real life aint WarGames, so it doesnt take a supercomputer to realize the only winning move in this game is not to play. -- Jeremy Parish

Karnov really is something special. Most NES protagonists were boring things like robots or little kids or ninjas or little robot ninja kids. Karnov was a bald shirtless guy with a mustache and angry, furrowed brow who spit fireballs, or possibly fired them from his armpits. Its a character design that begs questions. America never got the answers to those, as our version had the plot-expositing cutscenes removed due to their controversial religious content. Knowing that Karnov was sent by God Himself to rid the world of wickedness just makes him more baffling. His game is surprisingly nifty, too, featuring some truly non-standard power-ups like portable ladders which can be carried around in an inventory which resembles that of Zelda, if one squints a bit. -- Jake Alley

Look past the weirdness of this ninja action game and you have a pretty solid arcade conversion with a handful of quirky mechanics (like the way attacking a boss will briefly disarm you). Then again, the weirdness is half the charm. The combination of ancient Japan, bizarre monsters (Death Breath, for instance), and a totally tubular 80s-slang-ridden U.S. conversion make this one more than merely the sum of its parts. -- Jeremy Parish

Tasked with creating a game that made you feel like a badass ninja, the developers of The Legend of Kage succeeded in giving the player character unbelievable agility. Jumping really high was the main draw, but the overly-simple level design felt more appropriate for arcades than for consoles. Pronounce it cage at your own risk. -- Jeremy Signor

Bomb Jack was a modest hit for a pre-Ninja Gaiden Tecmo back in the arcades, and this home conversion did fairly well for them too. In retrospect, the games unique control scheme tends to be the subject of considerable misunderstanding, but played properly -- that is, by someone who understands how to control the heros floaty jumps, its a fun exercise in technique and action strategy. -- Jeremy Parish

The first console entry in Nintendos fan-favorite franchise, Punch-Out!! is a boxing game thats all about timing, quick reflexes, and pattern recognition. The NES version was something of a conversion of the arcade title called simply Punch-Out!! The player character, affectionately named Little Mac, was made smaller so that it would be easier to see the comically large opponents that he is fighting. The game was later re-released as Punch-Out!! Featuring Mr. Dream, either because Nintendo lost the license to Mike Tysons name, or because Mike Tyson is a freak and a terrible role model. -- Luke Osterritter

Konami may not have earned any points for subtlety with this one -- its like Russian Attack, geddit!? -- but at least they did a pretty good job of capturing the natural zeitgeist of 1987 and splashing a bit of cold reality in its face all at once. Thanks to movies like Rambo, plenty of Americans felt like they could totally take on the Russian military armed with a knife and whatever rocket launchers they found along the way. Rush N Attack let them! And its insane difficulty level showed just how suicidal such an act would be. A commendable public service. -- Jeremy Parish

Gravity doesnt usually kill video game characters like it would in real life, but occasionally developers dabbled in utilizing mechanics that simulated these effects to some rational degree. And then you had Spelunker, where you would die if you fell off of a stepladder. The charming visuals and exploratory level design lured many into its clutches. Pity those who were, as their fate was to die over and over again. -- Jeremy Signor

Track & Field was not the token game designed for the Power Pad; that was World Class Track Meet. Track & Field, however, was basically the same game. Mash buttons just right to run and jump. In fact, despite being older, Track & Field can easily be called the superior of the two due to its use of a traditional controller, making it impossible to cheat at the long jump by leaping clear of the map and waiting a while before hopping back on. -- Jake Alley

A side-scroller set in a bizarre post-apocalyptic future blended with classical mythology, Trojan spans six stages of mutants and Mad Max rejects. Sub-bosses and bosses lurk in each level, and the mighty Achilles waits at the end of the line. Unlike most games of its genre, Trojan arms its hero with a versatile shield that can block attacks from all directions. Compared to 1985s Ghosts n Goblins, Trojan is a laid-back stroll through bombed-out cities, thanks to a generous health bar and power-ups beneath every manhole. -- Wesley Fenlon

By my reckoning, Wizards & Warriors was Rares first creation for NES, and you can see the lingering vestiges of the companys Spectrum heritage in the games visual style. Clearly, though, the devs were a little drunk on the relative power of the NES, as this is a much faster-paced game than their previous work. The hero, Kuros, flops about all over the place while exploring a network of open-design levels in search of mystical tools to let him defeat an evil wizard or some such. A bit of a mess, but fairly fun regardless. -- Jeremy Parish

Weve come a long way since the 80s, and today we game on consoles and PC with seemingly limitless processing power. But in olden times, systems were strictly limited in the colors they could render and even the number of moving objects that could be displayed at once. The NES was infamous for its sprite limitations, as only a few objects could be drawn at once on the same line... a real hindrance on a system where most games involved shooting on a horizontal plane. The workaround? The system would alternate drawing objects, causing everything to be displayed in the aggregate but also creating the sensation that they were flickering in and out of existence. While hardly the only system to use this trick -- the 2600 version of Pac-Man was panned for it -- flicker has become a part of NES nostalgia to the point that modern faux-NES creations often offer the option to simulate the effect. -- Jeremy Parish 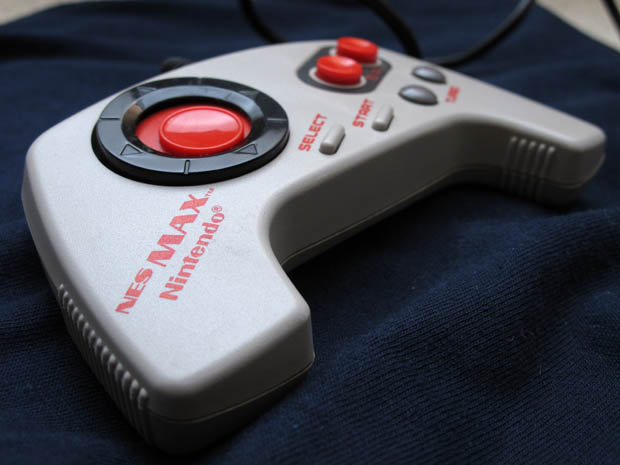 Touted for its supposedly amazing and revolutionary cycloid control pad, the NES Max actually was rather impressively ahead of its time. The wing-shaped structure of the controller would be mimicked nearly a decade later by Sonys PlayStation controller and its derivatives, and the cycloid control disc has made an unexpected return in Nintendos own upcoming portable, the 3DS. Futuristic as it may have been, though, the Max wasnt really suited for its own time. The cycloid disc, perfect for analog control, felt mushy and imprecise on a system whose library was designed for digital input, and it didnt seem to properly recenter... shades of the unfortunate Atari 5200 joystick. -- Jeremy Parish

A wholly brilliant idea, the PlayChoice 10 was a perfect way for Nintendo to advertise the NES library in the days when arcades were still viable and no one had ever heard of a demo disc (or a disc, for that matter). The PlayChoice 10 was an arcade machine containing NES hardware and a selection of ten different games that could be played for a set amount of time for 25 cents... way cheaper than a rental, and just enough to offer a compelling sample of the latest big titles. It was one thing to see Super Mario Bros. 2 and 3 promoted in 'Nintendo Power?, but something else entirely to actually play them for a few tantalizing minutes. These also existed as the PlayChoice 5 variant and the more limited Nintendo Vs. head-to-head machines, but PlayChoice 10 is the one everyone remembers. -- Jeremy Parish