In the early Famicom days, certain Japanese developers demonstrated a curious habit of snatching up the rights to Western properties, building games around them, and then never exporting said games to the territories where the properties had originated. You can certainly understand why Japanese originals such as Urusei Yatsura and all those Gundam games never made it to the U.S., but what about Transformers? Or Jim Hensons Labyrinth? American brands such as those would seem a shoo-in for a U.S. release, but strangely never made their way west...

...or perhaps not so strangely, given the dire quality of those games. Nintendo tread cautiously in the U.S. back in those early days of the NES, no doubt mindful of the dark and unhappy place the market was recovering from. Though not every early NES release was a timeless classic, each one was competently programmed and played well, which is more than can be said for Labyrinth. Nintendo employed its first-party approvals process as a ferocious protective measure, adamant that its console would never travel down the same road as predecessors such as the Atari 2600 and the ColecoVision. If software as dreadfully terrible as Labyrinth had made its way into American hands, well, Nintendo might well have been doomed from the very start.

Standing in pleasant contrast to these disasterpieces was a simple platformer based on Richard Donners cult-classic kid flick The Goonies, developed by a budding young company called Konami. Of the many Famicom games derived from western licenses, The Goonies alone was good enough to merit a U.S. release. Well, almost. Though that never quite came to fruition, its curious legacy commands a unique place in NES history. Moreover, when paired with its sequel, The Goonies provides a compelling example of just how quickly game design grew in sophistication and complexity under the NES banner.

On its surface, The Goonies is your typical mid-80s arcade-style action platformer. Players take control of Sean Astins character Mikey Walsh, the designated hero of the films ensemble cast, running and kicking his way through a series of monster-filled stages. Each level operates under a harsh time limit, hazards are abundant and unforgiving, and youre offered no continues and very few opportunities for extra lives. The Goonies is a tough game, but to its credit much of the games challenge is found in its complex stage design.

In a sense, The Goonies is like an action platformer take on Namcos Tower of Druaga -- not an unsurprising choice, given that Druaga was one of the first-ever third-party breakout hits for Famicom. But Konamis designers did a clever job of distilling the essence of Druaga into a speedy action game: Each stage is a self-contained labyrinth of growing complexity, and bonus items are hidden in obscure places throughout each stage. While not strictly necessary, finding these items makes Mikeys quest vastly easier, much like the secret treasures in Druaga. The items secreted away throughout the Fratellis hideout and in the caves beneath Astoria greatly increase Mikeys survivability, protecting him from such hazards as bats, explosions, steam, and assault by opera.

For a game based on a movie of its vintage, The Goonies does a remarkable job of recreating the films spirit and essence. Granted, its hardly perfect -- Mikeys on his own as he seeks to rescue his companions from their prison vaults throughout the levels -- but the stage designs nicely recreate the films settings, ultimately culminating in a romp through a pirate ship. The hyper-aggressive rats, octopi, and undead skeleton creatures (zombie Chester Copperpot, perhaps?) are the sort of creative liberty to be expected from this type of game, of course, and you can even forgive the presence of a ghostly One-Eyed Willy simply for the fact that the developers actually did something with a dead character who was given only about 30 seconds of screen time yet managed to dominate so much of the story with his legacy.

What sets The Goonies apart from so many of its peers is that its simply so well-made. Konami was one of the first developers to really get a feel for the Famicom hardware, and even their earliest games for the system (which also included Gradius and TwinBee) were arguably the only third-party titles at the time which felt as solid and refined as Nintendos own creations. Notably, though, The Goonies was far more ambitious than any action game Nintendo produced before Metroid and Kid Icarus; rather than consisting of a series of single-screen stages, the level design in The Goonies was fairly complex, featuring a two-sided world design in which separate chambers interconnected in increasingly intricate ways. After a deceptively simple start, the levels quickly grew in size and content, and by the end of the game the greatest challenge was simply to navigate the spaghetti-like tangle of caverns and pipes within the time limit.

Unlike total digraces such as Transformers: Convoy No Nazo, The Goonies would have made a brilliant impression on early NES owners. In fact, had it launched in 1986 as the NES was still making its way into the national market, it would have been a key title, a game that every kid had to own for their library. Inexplicably, though, it never saw release, despite the ease of localizing the game (which included no Japanese text whatsoever). Clearly Konami at least considered the possibility of a U.S. release, though; The Goonies did make its way to America... just not on NES.

Rather than showing up as a home console release, The Goonies put in an appearance on Nintendos Vs. System arcade hardware. Similar to the PlayChoice 10, the Vs. System was an arcade machine designed to demonstrate NES games, the main difference being that the units were dedicated to a single game rather than offering a selection like the PlayChoice did. Every once in a while, NES fans would run into one of these machines in an arcade or pizza joint. And of those, a tiny percentage came across cabinets dedicated to playing The Goonies.

Maybe timing was the issue that killed The Goonies chance for a U.S. home release. By the time I encountered Vs. The Goonies (fortuitously located at the pizza parlor my family liked to visit after church for Sunday lunch at least once a month), Id already played its sequel extensively. That made the first Goonies game something of a holy grail for me -- maddening for its seeming non-existence as an actual product I could purchase and take home -- but also rather less than impressive. Because, you see, The Goonies II was a vastly more sophisticated game.

In the year or so that transpired between the release of Konamis two Goonies games, Famicom and NES software took a turn for the better. Nintendo and its licensees began developing more complex circuit boards that greatly expanded the potential size and substance of games, and massive adventures like Metroid and The Legend of Zelda helped push game design beyond simple linear side-scrolling tropes. While The Goonies II arrived in Japan a mere 13 months after its predecessor, the difference between the two games was profound. The original was published on a CNROM board, while the sequel arrived in the UNROM format, which had twice the storage capacity. The funny thing is that both games were essentially built around the same core concept -- leading Mikey Walsh through a series of caverns to rescue his abducted friends -- yet the sequel was comparatively enormous thanks to the magic of technology.

In a sense, The Goonies II was a proper realization of what the first game had hoped to accomplish. Players still moved through a two-sided interconnected labyrinth of caves, but this time there were no arcade-style level divisions; the Fratelli hideout and all that lay beneath could be freely traversed and explored. Mikey still collected tools and items to help him complete his adventure, but they were no longer quite so random and arbitrary in their placement, nor quite so optional. The game world was huge, with a tremendous variety of environments to explore: icy caverns, geysers, a volcanic shaft, a fully submersed unground lake, even a second shack appended to the Fratellis hideout.

The Goonies II also embodies many of the game design foibles of its era, too. Developers were sometimes a little too eager to add depth and variety to their games, and they werent quite ready to let go of the old arcade mentality that demanded they make the players experience occasionally frustrating and opaque. The Goonies II team went about this by incorporating adventure scenes, first-person rooms built for pixel-hunting. Players were forced to punch, smash, and bomb their way through rooms hidden behind doors located in the action portions of the game; the adventure scenes contained weapons, upgrades, the kidnapped Goonies, and even connected the Front and Back maps. They were essential to progress, in other words... but not a lot of fun. 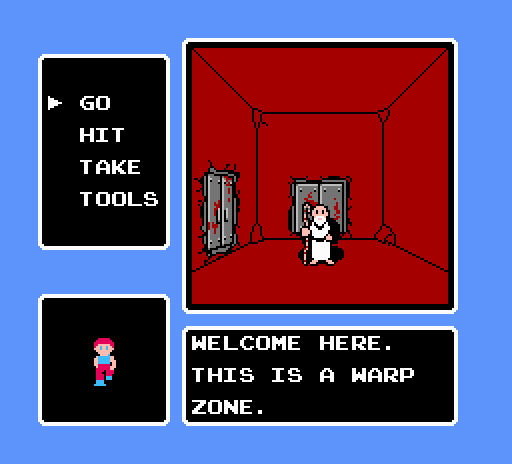 The Goonies II still featured plenty of great moments, though. Its sense of exploration was unparalleled at the time; it lagged behind Metroid by a mere six months, yet it offered no less complex a world, and it boasted far more colorful and varied graphics. As a sequel, it offered plenty of direct callbacks to the first game, from the various gadgets Mikey could acquire -- including bombs, slingshots, and raincoats -- to more subtle nods, such as the seemingly impossible leap that could only be completed with the help of jump boots... an obscure shortcut in The Goonies, a classic metroidvania sticking point and key to advancement in The Goonies II.

The annals of gaming history treat Konamis Goonies games as mere footnotes, if that. And perhaps thats fair. Nevertheless, theyre quietly remarkable works that reveal a crucial cross-section of NES and Famicom history, both in terms of game design and business development. Not bad for a bunch of outcast kids from Oregon.