Games | Super NES | Out of This World

When Out of This World debuted in 1991, it seemed the likely successor to Prince of Persia -- not the 3D Sands of Time incarnation, but the original Apple II platformer by Jordan Mechner. Mechners opus focused on fluid animation over graphical detail, and while it featured many death-defying leaps, pixel-perfect accuracy was not required. This design choice made the game more strategic and a bit of puzzler compared to the more timing-based, hands/eye-coordinated fare offered on the NES, and was a boon to me, as someone who to this day enjoys Super Mario Bros. yet inevitably gets his ass handed to him around world 8-2.

Prince of Persia also featured cinematic cut scenes using the games animation system. Told largely through pantomime, they approximated the conventions of silent film (with a few musical cues here and there). Add in the straight premise of Rescue the princess within the hour and some decent swordplay, and you had a #1 best-seller whose main flaw was that its many levels came in two flavors -- dungeon stone grey and palace gold and tan.

Out of This World solved this problem with stylish vector-based graphics, allowing for elaborate animation within limited memory constraints, as well as allowing for entirely different screens within levels compared to the common tile based backgrounds of the time. It also did not tell the user what to do whatsoever. The short manual describes the controls and has a cryptic journal entry from the protagonist that offers a few clues. The rest is for the player to figure out.

This initially leads to death, and lots of it. But just as you start to get that Dragons Lair feeling, the rules of the game start to sink in and the intuitive controlsnot to mention infinite lives and ample checkpointskeep you from getting overly frustrated. The game finds a nice balance between building off of what you have learned and keeping you surprised at what comes next. By avoiding padding the game with repetition, Out of This World focuses on its strong narrative.

What makes Out of This World so memorable are its story, its setting and how the story is told. The opening cinematic shows a young physicist returning to the lab on, you guessed it, a dark and stormy night to run his experiment on particle acceleration. An ill-timed lightning strike seems to vaporize our hero, as well as a huge chunk of his lab, but we soon see he, and said chunk, have been teleported to another world (which, incidentally, was the games original title in its native Europe).

Largely set on that strange, alien, other world, the effectiveness of the stylized graphics in establishing the tone and mood of the game cannot be overstated. Little details, like tiny flying creatures in the background, hint at a fully realized world beyond the confines of the story, and the vector graphics have aged very gracefully, appearing not dated or archaic, but simply as they should. 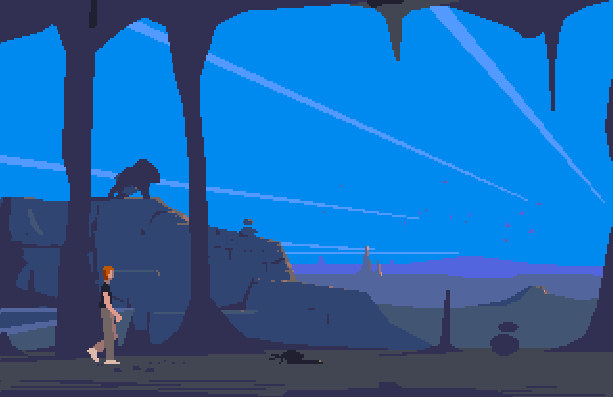 Perhaps most importantly, Out of This World tells its tale using only pantomime, gesture and well-chosen sound effects. Even when the aliens speak (which blew my mind in 1991), its in their own language with no translation, yet their gestures and body language are easy to understand. Most plot points happen in game and the occasional cut scenes offer a bit of camera work, but otherwise keep you immersed.

It is certainly a short game, taking me about a week to beat initially. My recent play-through clocked in at two to three hours. Yet a few of the puzzles are quite elaborate even a second time, and some the later platforming should prove a bit of a challenge even for a grizzled NES veteran. All in all, the game seems as long as it needs to be without overstaying its welcome.

Later games -- most notably Flashback by the same publisher -- tried to expand on the concepts introduced by Out of This World, but none were nearly as memorable, not even designer Eric Chahis own Heart of Darkness. Personally, I didnt come across a true spiritual successor until I played 33-Ico on the PS2, another beautiful yet minimalist game with intuitive controls and a compelling story told with little to no dialogue. In hindsight, the similarities arent merely a coincidence, as the creator of Ico has cited Chahis work as an influence.

Games have always seemed like a form of art to me -- certainly a form of expression and not a mere leisurely pastime or test of skill. Roger Ebert, a man whose opinion I respect on many topics, has often come out against videogames being art before finally conceding that he has no interest in playing them. As you know, watching a game is no substitute for actually playing.

If games are indeed high art, this is the first one that personally comes to mind. However the debate plays out, it remains one of my favorite games.