Okay, lets get this out of the way first. Its not like people hate Okami. People like Okami. Critics especially like Okami, myself included -- it garnered high scores across the board and won several awards, including some from outside the gaming industry for its artistry and design.

No, the reason it landed in this issue is simply that apparently hardly anyone actually bought Okami. It has the dubious distinction of being singled out as the least commercially successful winner of a game of the year award in the 2010 version of the Guinness World Records Gamers Edition. Although its sales figures probably werent actually the reason for the demise of developer Clover Studio, as was widely speculated at the time, they certainly would have loved to see their masterpiece do better.

Its hard to say exactly why Okami faced such an uphill struggle on the market despite its many strengths, though several factors no doubt contributed. One was its arrival at the tail end of the PS2s lifespan, with a release date a scant two months ahead of the rather distracting launch of the PlayStation 3. Another launch occurring in the same time-frame was the flagship Zelda entry, Twilight Princess, inviting inevitable, and sometimes snide, comparisons between the two sprawling adventure games (both featuring lupine protagonists). In truth, both games had been in development long enough that its highly unlikely either stole ideas directly from the other, although Okami director and Zelda fan Hideki Kamiya freely acknowledges the influence of the older series on his own action/adventure.

Then, of course, theres the most immediately obvious unusual characteristic of the game: the art style. At the end of a generation where most developers were trying to squeeze every last drop of gritty realism from their graphics hardware while a few others used cel-shading to mimic contemporary animation as closely as possible, Okamis use of traditional Japanese art styles was something completely new. The overall design of landscapes and characters is based largely on the ukiyo-e style of woodblock prints, with the enemy encyclopedia scrolls and Issuns chapter end-piece paintings hewing even more closely to traditional techniques. 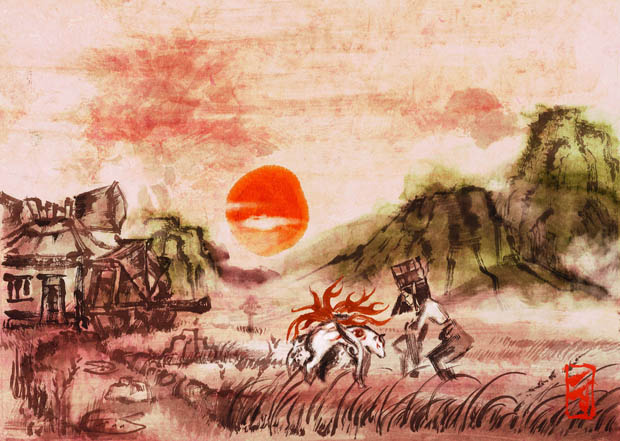 When special brush skills are used in the game, the style shifts to sumi-e, a tradition practiced across East Asia using only black ink on a tan canvas. In fact, it was the non-traditional choice of graphical style which inspired the developers to come up with the brush technique system. Though drawing on the screen with the analog controller might seem a bit cumbersome at first, the simple glyphs prove fairly easy to execute. Its a fun system that really lends an air of god-like powers to the players arsenal, and is probably the most original aspect of the game along with the art itself.

In keeping with the very Japanese rendering, the plot, setting, and characters of the game are nearly all drawn from traditional Japanese mythology and folktales. The central narrative, involving the sun goddess Amaterasu waking from a long sleep in a cave, the battle between Susano-Oh and the eight-headed demon Orochi, and a flashback involving Nagi and Nami, is entirely drawn from the Shinto creation myth in which Izanami and Izanagi are the original divine beings who created the islands of Japan. The Orochi battle in particular, with the planned sacrifice of the maiden Kushinada and the use of the eight-fold sake, hews very closely to the original myth. The sub-plots throughout the rest of the game amount to a hit parade of popular folklore, including Urashima Taro (often compared to the American Rip Van Winkle), Momotaro the peach-boy, the eight canine warriors, the tongue-cut sparrow, Kaguya and the bamboo-cutter, the demon fox Ninetales, and numerous others both famous and obscure. On top of all that, Amaterasus weapon types -- the sacred sword, mirror, and beads -- parallel the Imperial Regalia of Japan, which also derive from the same mythology.

Okami isnt content to draw from just one set of traditions, though. The entire final act of the game takes place in a setting based on Japans native Ainu culture and drawing on their stories, including the legendary hero Okikurmi. The Celestial Gods, from which Amaterasu learns brush techniques, are based on the Chinese Zodiac (including the cat, being the 13th animal kicked out of the standard set, and with Amaterasu herself standing in for the dog). A few relatively modern influences sneak in as well; Kaguyas rocket ship is clearly influenced by retro Western sci-fi designs. And then theres Wakas outfit with its eagle-like hood and wing-like cape, which character designer Yoshimura Kenichirou admits are based directly on anime characters from Gatchaman (better known as G-Force or Battle of the Planets in the U.S.). 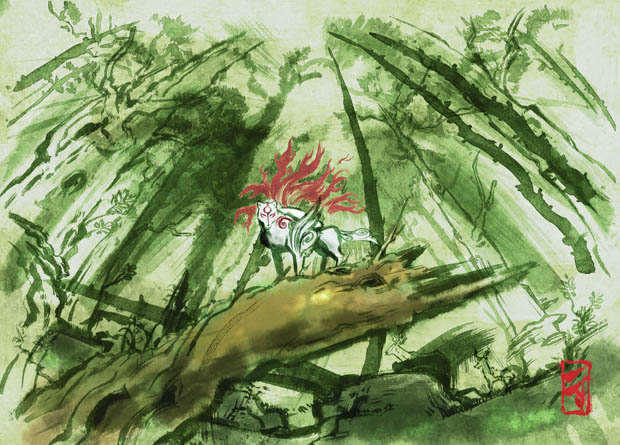 Also not to be overlooked as an integral part of Okamis design is the music, a stellar soundtrack from a team of composers led by Masami Ueda. Like the rest of the game, its a mixture of very traditional Japanese styles and themes, complete with a lot of historical instrument samples, tempered with more modern additions. This results in a huge range of styles, ranging from Noh theater music and Gagaku court music to hummable tunes and tense action pieces. Another feature of the soundtrack is the use of environmental sound effects in the pieces; the theme for the Sparrow union includes chirping in its rhythm section, while that of their nemeses Mr. and Mrs. Tongue-cutter is cut through with the metallic sound of sharpening blades.

Clearly, I could go on about Okamis amazing design and artistry all day. (And if you love it as much as I do, I highly recommend tracking down Okami Official Complete Works, a sumptuous art book which, amazingly, actually received an English translation courtesy of Udon Press.) But I suppose I should also mention the gameplay, which is no slouch either. At its heart, Okami is a fairly standard 3D action/adventure/platformer; you roam around expansive environments, fight enemies, solve puzzles, look for secrets, and help out plenty of NPCs. In this respect, the Zelda comparisons are apt, as you spend much of the game accumulating new tools for exploration (largely in the form of brush techniques) and new attack abilities (usually moves learned at dojos, though most brush skills can also be used offensively).

The game is paced to separate more combat-intensive segments from ones more focused on exploration and puzzle-solving, as each new area is initially suffering under an evil curse, making enemies and poisonous barriers plentiful while other wildlife and NPCs are scarce. Amaterasu must fight her way to a central cherry tree and revive it with her godly powers, causing the entire region to be reborn in a riot of swirling flower petals and sprouting greenery that is one of the games most striking visual effects. 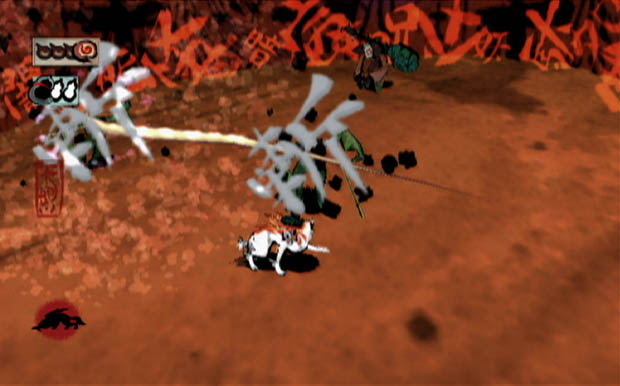 Fighting takes place in magically circumscribed arenas and, honestly, is often not terribly challenging unless the player subjects themselves to self-imposed limitations when powering up. But the ever-widening variety of techniques available still keeps things interesting; in addition to getting up close with the sword and mirror or standing back with the beads, you can always choose to use brush techniques to buffet your enemies with the elements themselves. Bored of that, too? You can embarrass your foes completely by raising a leg and... well, lets just say the final two techniques are named Golden Fury and Brown Rage and leave the details to your imagination.

Once a region is un-cursed, it opens up for exploring, item collecting, quest running, and mini-gaming. Most of which is a lot more fun than it sounds on paper! Seriously, Okami is one of very few games where being stupidly completionist frequently made me smile in delight. See, Amaterasu, being a god, lives on praise. Collect the adoration and appreciation of mortals, and you can level up all her attributes as you choose. Obviously, helping NPCs with their various problems is one way to get praise, but there are several others. Theres no rule that the praise-givers have to be human; making other animals happy (by giving them food, of course) works just as well. Sprinkling a bag of seeds or herbs in front of cute woodland creatures and watching them chow down in a patch of sunlight as little hearts of happiness float off of them is just a recipe for sheer contentment. Heck, even feeding raw meat to the tigers is adorable.

Which brings me to another crucial feature of Okami; while the game certainly has moments that are tense, spooky, or sad, an awful lot of the game is just downright relaxing. Running through huge open fields to a joyful score with flowers trailing in Amaterasus wake gives a feeling of freedom and joy that Ive only found in my most favorite games. Despite the epic boss battles and numerous problems to be solved, the game is as much about healing as it is about conflict. As producer Inaba Atsushi put it, This project, with its mysterious vitality and inexplicable warmth, was something I wanted to share with the people of the world.

And hey, if you should want an even more relaxing time, theres always New Game Plus mode, which allows you to carry over enough stats and abilities to play Amaterasu like the untouchable goddess she is. 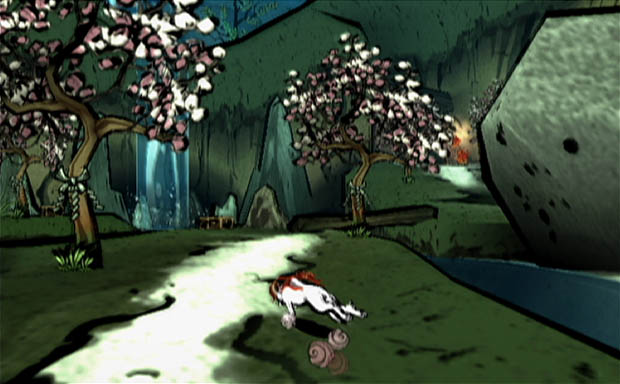 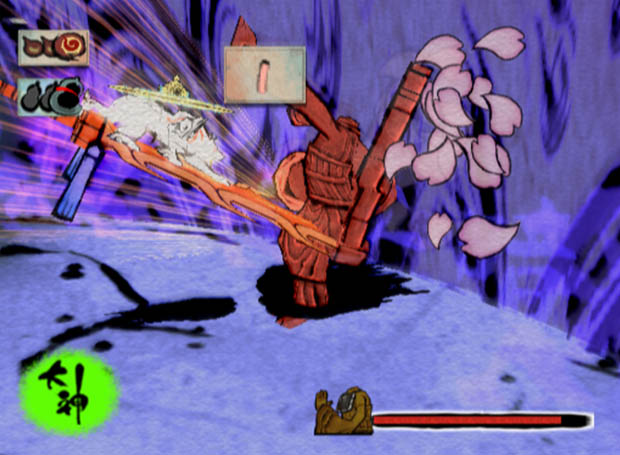