Remember R.O.B.? That lame robot thing that was originally packaged with the NES because everyone generally agreed that the only way to sneak a new videogame console into American homes was to disguise it as something else? Brütal Legend is a lot like that. Except rather than trying to hide a solid game behind a shiny cool robot toy that turned out to be a worthless piece of garbage, here were hiding a solid game behind a different game, which were then disguising as an incredibly tepid shovelware action game that can only sell on the star power of a celebrity people generally have grown fed up with. Maybe thats not the best metaphor, but the point is that EA was so scared by the prospect of marketing the game that Brütal Legend actually was that they actively avoided letting anyone catch a whiff of its real selling points.

Lets pretend we dont know the first thing about Brütal Legend going in -- after all, thats what the publisher was hoping for. As soon as you pop in the disc, youre confronted with something that may shock you on two levels. First, the startup menu takes the form of an honest-to-goodness live-action video clip, like from when games first started to show up on CDs, but without the terrible quality. Second, this clip stars Jack Black. A fair number of people out there are really sick of Jack Black, as he tends to play the same self-centered jerk who exploits everyone around him before learning to be a somewhat better person, maybe. Aside from his appearance in the intro, hes also the voice and all-around model for the main character. But its OK! Hes not playing the same character as in his movies! The protagonist of Brütal Legend is actually defined by his humility. No, really; its a major theme of both the plot and the mechanics that, as a roadie, his job is to make sure everything runs smoothly while keeping the focus on everyone else.

The next thing youre likely to realize is that this is a Tim Schafer game. That means its full of hilarious witty dialogue, delivered by actual talented voice actors -- in this case both established voice actors like Richard Horvitz (Invader Zim), Jennifer Hale (every female video game character with good voice acting ever), and Tim Curry, along with a surprising number of famous metal guys like Ozzie Ozborne, Lemmy Kilmister, and Rob Halford. It also means that everything looks kinda Tim Burtony, with really exaggerated character designs and a lot of asymmetry. Back in the LucasArts days, this also meant you could expect some amusing inventory puzzles, but these days its all about the weird, experimental gameplay.

For instance, once you really start playing, youll find yourself enmeshed in what appears to be a hybridization of modern Zelda game and a Grand Theft Auto? clone. You can run around with an axe in one hand and a guitar in the other -- they avoid the pun and so will I -- setting things on fire then hacking them to bits, exploring a big sprawling fantasy world full of monsters, and playing songs to summon aid or alter the world around you through the power of Rock. At the same time, the world is generally divided into three areas that are otherwise sprawling and waiting to be explored, a number of low-pressure side quests and scavenger hunts are scattered about the world, and you can summon a car at more or less any time with a fantastic selection of over a hundred songs. Rather classily, any given song (or subgenre) can be toggled off, giving the game a sound track of only those 50 or 60 classic metal songs you particularly like. Having a game that feels like GTA: Hyrule also leads to hybridized gameplay of some notoriety. Being able to peel towards some weird demonic thing at full speed, leap out of your car right before impact, and nail it with a melee combo before its done bouncing off your hood is just plain fun. 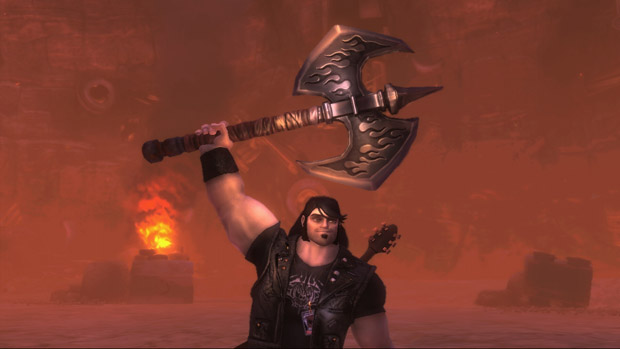 A lot of people take issue with how short the game is if one simply tries to complete the story mode without any goofing around, but thats doubly missing the point. Brütal Legend is very much a game about stopping to smell the roses. Even if side quests arent your thing, heading off the beaten path just to gawk at the eye candy is a worth doing. The entire game is designed in such a way that you can take basically any given screenshot and pass it off as a totally awesome metal album cover from the early 70s. The whole landscape is made up of giant demon skulls partly covered in dying grass, giant Stonehenge recreations made of swords, trees made of exhaust pipes, giant walls of speakers, and other impressive landmarks such that it takes particular effort to find a bit of scenery that doesnt look extremely cool. Even the sky looks awesome at all times, cycling through random weather patterns that variously feature eclipses, a fiery swirling vortex of doom, blood raining down, and a giant skull looming out from behind the mountains and leering at you. Exploring also turns up a number of points at which woodcut-style illustrations explain the history of the world with a mythology thats actually rather interesting and original. There are plenty of moments like, say, when you realize the 30-foot tall gallows with a hideous rotting corpse draped over the top is not a cool bit of scenery but rather an actual monster and that its possible to stun it and then ride it like a horse. The overall attention to detail more than makes up for the game proper having only 20 or so plot missions to deal with.

More importantly, we can excuse that shortcoming since this still isnt the actual game yet. The entire story mode here is just the hastily assembled sham the designers were forced to create in order to sneak the real game in through the back door. The real Brütal Legend, the game the developers spent several years perfecting before mucking about with this free-roaming adventure, is hidden behind all the other options on the main menu under multiplayer... and its a real-time strategy game. 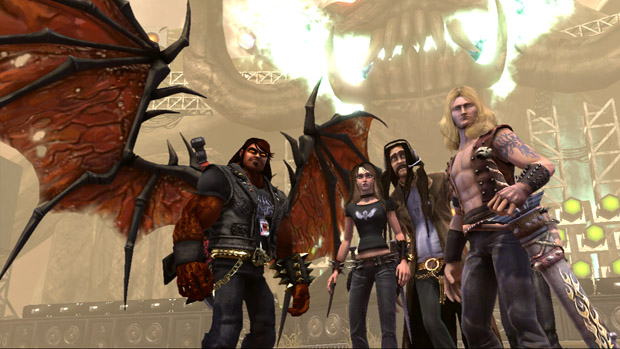 RTS games and consoles dont generally mix. Traditional ones rely so heavily on a mouse and keyboard that porting them just plain doesnt work; and the core gameplay, when done right, demands a mix of resource management, constant vigilance, and memorization of which units work best in which situations that only a particular breed of player can meet. Playing an RTS well usually takes the same sort of tactical mind as deep mathy games like the oldschool RPGs that kick your teeth in now and then, or Civilization, but it also requires the sort of quick reaction times the turn-based crowd abhors.

Making an RTS work on consoles requires so much rethinking that the end product doesnt even register in most peoples minds as an RTS in the end, but its doable. Take Pikmin, for instance. What Brütal Legend does is make a very interesting compromise. It upholds the strengths of an RTS game, balancing units in a paper-rock-scissors fashion, forcing choices between hordes of little cheap guys or investing in some high-tier units, securing resource nodes to press an advantage, and offering up a selection of three factions with interesting differences in their general approach. Meanwhile, everything that doesnt work for a console game gets pushed aside for a more action-oriented experience. While the option still exists to jump out to a birds-eye view, split units into different groups, and march them around the map to help ease RTS vets in, its actually a far better strategy to approach it like an action game. Maps are small and straightforward enough that keeping your entire army in a state of following you -- stopping only rarely to pull up a menu and queue up some new troops when your resources are abundant or backup is dwindling -- is ideal. 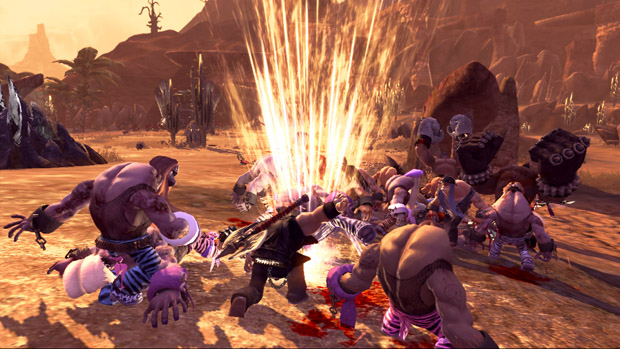 What really makes Brütal Legend impressive, though, is the degree to which the single-player game serves as training for the real deal. Around the halfway point, when the ability to summon troops is first introduced, youll probably realize that every other proper mission is introducing you to a new RTS unit and giving you a handle on their strengths. What you probably wont realize is that all those songs that summon hot, flaming death to your enemies, as well as that car you cruise around in, are also tools designed to aid in the large scale battles. Rather than your character being primarily some sort of awkward mouse cursor or big beefy hero unit, youre more of a support unit.

Played properly, you make a big ball of diverse units and throw it at the other guy. Then you run around doing crazy things to help your ball fight. Cast a buff spell here, a debuff there, call in your car to run down that specialty unit thats slaughtering your melee guys but ineffective against vehicles. Then take advantage of the team attacks available to every one of your units, letting you take control of them and activating a devastating special ability that can really turn the tide. Its a very odd game, and a very unique game, but once you get your head wrapped around it you realize what a horrible tragedy it is that it was shoved into the corner. Particularly when you realize how much situational voice acting can only be heard during skirmishes between the factions you cant use in the story mode. The difficulty slider for the AI keeps things enjoyable for those whod rather just play the computer than take the game online.

Oh yeah. Theres a ton of jokes and references about heavy metal in the game, too. 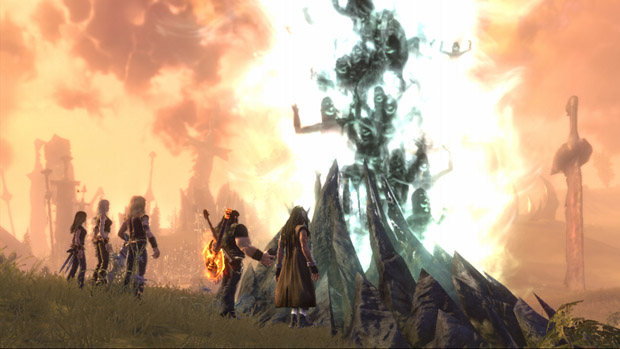 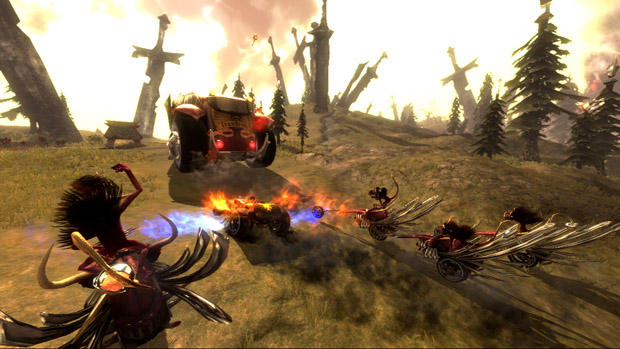