In 1997, anime was on the cusp of becoming something huge in the United States. Sailor Moon had ended its initial syndicated run only to resurface on basic cable, Neon Genesis Evangelion was enjoying the first of many American releases,and the gears were already turning for Pokémons marketing push the following year.

That same year, side-scrolling platformers had become a thing of the past. The Sony PlayStation, Sega Saturn, and Nintendo 64 had arrived, ushering in the era of boxy polygonal heroes and blurry anti-aliasing. The humble two-dimensional mascot game was a vestigial thing, a relic of a 16-bit era that had already worn out its welcome through a glut of similar hop-and-bop titles. With the advent of systems powerful enough to push true three-dimensional rendering and wide open worlds to explore, the future was in seeking out level-ending stars and raiding ancient tombs sparsely populated by dangerous wildlife rather than running from left to right, stomping on everything that moved, and collecting everything that didnt. Caught between the explosion of anime in the west and the exaggerated rumors of death for the favored game design of the 16-bit systems, Mischief Makers hit the scene at the absolute worst possible time.

Enix released the Treasure-developed Yuke Yuke!! Trouble Makers in June of 1997, and after a quick (but still alliterative) nip-and-tuck of the name, it made its way to America as Mischief Makers that October. The product of almost entirely the same staff as Gunstar Heroes and Alien Soldier for the Sega Genesis, its easiest to appreciate Mischief Makers as an evolution of the earlier pair of titles. Mischief Makers borrows its close quarters grabbing and throwing combat almost wholesale from Gunstar Heroes, while the stop-and-go challenges of Alien Soldiers lengthier levels are here broken up into distinct minutes-long stages. 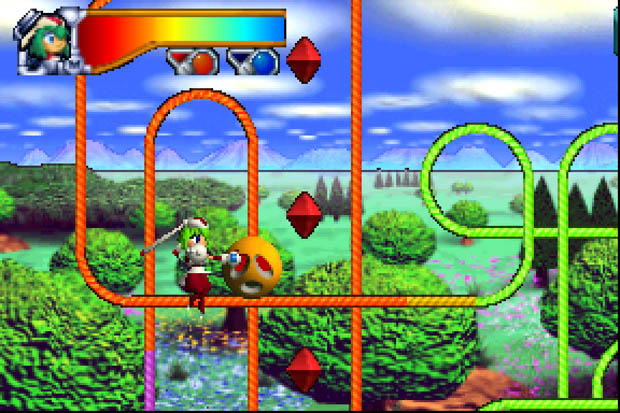 Unlike either Gunstar Heroes or Alien Soldier, however, the Nintendo 64 titles short areas rarely offer risks in and of themselves, with the vast majority easily completed simply by dashing to the right as quickly as possible. This is mostly thanks to enemies who do little damage and a plethora health-restoring gems scattered about. Simply beating each level and reaching the games ending without truly exploring what each snack-sized stage has to offer leads to something of a hollow victory rather than the triumph of managing to perfect the grueling gauntlets of Gunstar Heroes or Alien Soldier to reach the end-credits, and Treasure hammers home the method behind the madness of Mischief Makers in a wonderfully subversive way.

It only takes a few hours to work through Mischief Makers fifty-plus stages, and once youve overcome a climactic battle where you literally shake up the villains evil convictions and throw them back in his face, you get exactly the ending you deserved for rushing through. Each stage in Mischief Makers contains a single yellow gem, hidden in an out-of-place area or earned by doing something special in the level or during a fight, and in the upper left-hand corner of the screen during the ending of the game reminds you of exactly how many of the yellow gems youve earned. After a few seconds, the number decreases by one with the inexorability of a buzz-saw heading toward a ninjas ribcage. Every few seconds, one of the gems you lucked into obtaining disappears. When the number reaches zero, the ending itself abruptly ends. You return to the map screen, where you are free to watch the ending you earned with your efforts, the games production credits, or return to any conquered stage or boss that you like. Suddenly, rather than an OCD collectible for perfectionists that may or may not unlock something almost as neat as the chance to see Yoshi just standing around in three dimensions, the absence of yellow gems on your world maps prove to be the barrier between you and a satisfying conclusion to the games silly storyline. 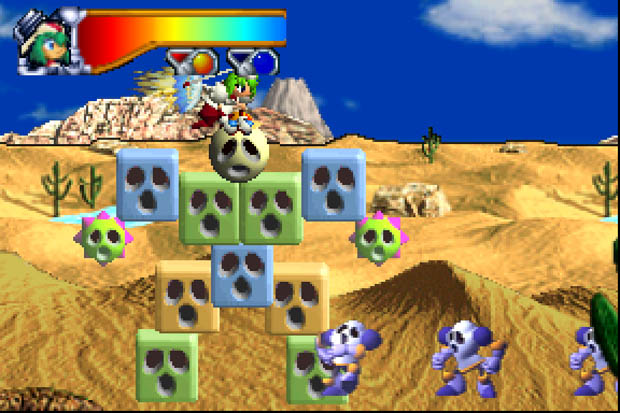 You thus return to the beginning, armed with the knowledge that certain statues can be destroyed. Red walls can always be bombed, so long as you can find a bomb in the stage. Youre reminded from an earlier tutorial that you if you slide and then jump, youll move both further and faster than you would otherwise. With an impetus to obtain the entire ending that was withheld from you by your own lazy habits of just wanting to finish the game as quickly as possible to see the ending and pat yourself on the back, you now want to spend time inside of each minuscule level and find every secret that the corners and walls have to offer you. Some of the yellow gems are easily found with a little legwork. Others are maddeningly opaque, requiring you to grab and shake every enemy you can find to see if they might be the one who holds the treasure you seek. When you grow frustrated with slowly scouring every last edge of a stage and still coming up empty-handed, Mischief Makers invites you to begin the stage again and plow through it as fast as humanly possible with the precision required to earn the coveted A or S rank for your completion time, a feat that nabs you an additional yellow gem once your GPA is high enough. With each level being so short and easily vanquished, it can be surprising when just mashing your way through as you did initially gives you a B ranking instead, proving that you havent yet found the optimal path. And then, just when you think that the difficulty never quite reaches the level that you know Treasure is capable of throwing at you, obtaining the yellow gems guarded by the games bosses proves to be a controller-throwing exercise in masochism as you try to defeat them without taking a single hit.

While the old school gameplay means that it was a game released too late for appreciation, Mischief Makers was also released too early to sell to the people who would buy anything with eyes that took up sixty percent of the heroines face. Each world, consisting of about ten stages apiece, begins with Professor Theo being kidnapped and ends with a climactic showdown with a villain who builds up in power throughout cutscenes and mini-boss battles. After your victory, youre treated to the exact same gag reel and a closing monologue over a shot of the planet Clancer, giving each world the feel of a weekly anime episode. The villains include the impulsive hothead, the brutish muscle, and the cocky pretty-boy that make up just about any trio under the rising sun. Theres a betrayal by a family member, transformation sequences, and giant robots. It might have been embraced by those who were hungry for any two-dimensional platformer in 1997, or by the fans of anime who werent yet being catered to hand and foot as they would be a few years later. But two niche audiences couldnt add up to a hit even then, and Mischief Makers was left to toil in relative obscurity, mostly remembered for Marinas shake shake! voice clip. 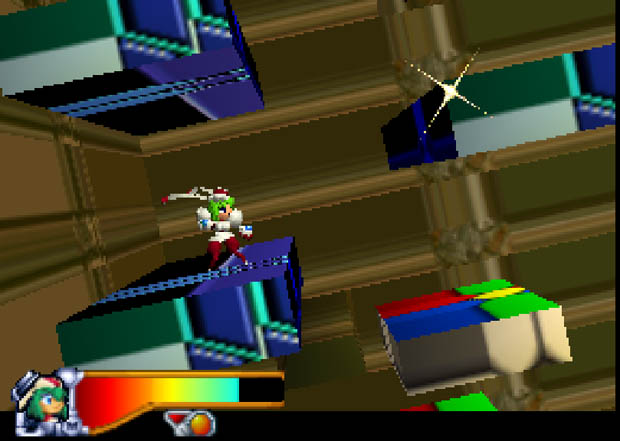 Its an honest shame, too. The petite levels in the game arent just ideal for speed-running or the perfect size for searching out a well-hidden treasure in, theyre also packed full of clever ideas that never wear out their welcome. Almost nothing you do in any two given stages of Mischief Makers is identical. Early on in the game, you ride a giant superhero made entirely out of blocks across the desert, smashing everything in your wake in what feels like a precursor to the Mega Mushroom from New Super Mario Bros. When youre tasked to play as that heros regular Clancer form later in the game, instead of returning to the invincible giant you controlled earlier, youre given fisticuffs and a triple jump to work with for all of two stages before its back to Marinas moveset of dashes and grabs. Sometimes you even get to ride a cat after defeating it in mano-a-mano dodgeball combat. But while the sheer variety of tasks to perform keeps the game constantly fresh, not every level works out perfectly. The game stumbles in the fourth world in particular when it asks you to slow down in a few stages, including a teleportation maze and a ghost hunt that both suffer from laconic pacing and a focused goal. The worst offender is the usually tried-and-true Treasure mini-boss gauntlet. When Marina is tasked to defeat seven mini-bosses, there turns out to be only three different mini-bosses who are then cut and pasted into different areas of the stage. Its a rare moment of repetition in the gameplay, and its especially disappointing given that game perfectly sets up a three-boss situation in an earlier stage before padding things out instead.

Packed with creativity, variety, solid play controls and incredible replayability, outside of Treasures oeuvre Mischief Makers feels more than anything else like another contemporary, Klonoa: Door to Phantomile. Sharing a similarity in grab-and-throw gameplay and a depth to the stages that becomes most openly clear after an initial play-through, as well as both being two dimensional platformers a day late and a dollar short. Both were tragically overlooked at the time of their release. While Klonoa? has since received a full remake from the ground up for the Nintendo Wii, Mischief Makers hasnt even been blessed with a release for the Virtual Console at the time of writing. Nonetheless, its well worth tracking down, and playing it is even worth suffering through the nightmarish horror of blur and pre-rendering that is an N64 title on a modern day television. Even if you do just end up YouTubing the full ending once your appetite for masochism has been sated. 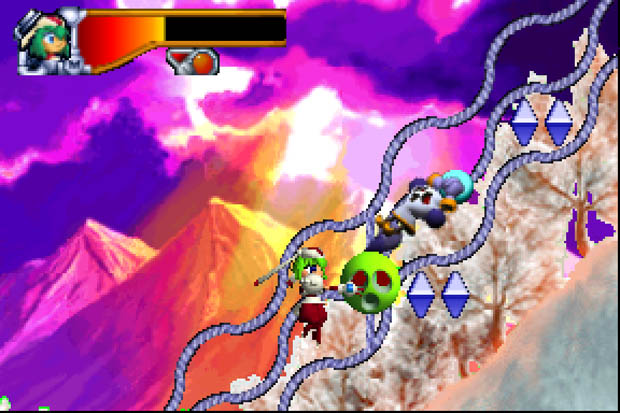 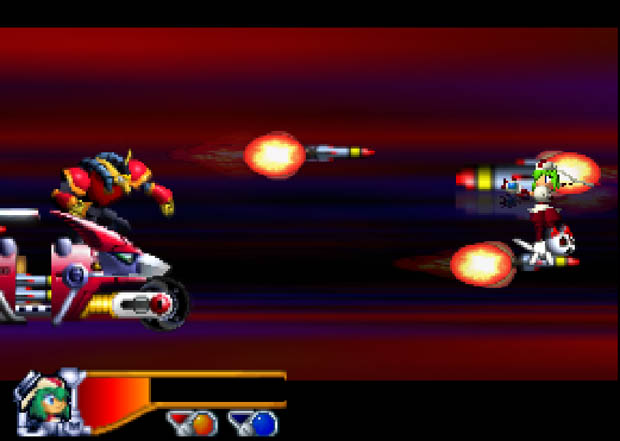