How do you update a 20 year old game that had no real sequels in the interim? For NES favorite Bionic Commando, the answer is to make Bionic Commando: Rearmed. To make a full-blown sequel? That is a little more complex. How do you attract new people to your concept and keep fans of the original happy? Do you do it at all, or do you just make a massive fumble more or less killing the game at retail? Judging by the poor sales and critical reception of this game, they more or less fumbled. Capcom said they will no longer get Western developers to working on original(ish) projects anymore, due largely to the failures of Bionic Commando (2009 version) and Dark Void. Meanwhile the downloadable Rearmed, which was made as little more than a (exceptional) promotional tie-in for BC09, is getting its own sequel.

This game is flawed, but is undeserving of all the ire it seems to have generated. It does seem to miss the point of the original quite a bit. Radd Spencer now has some terribly out-dated white-boy dreadlocks, on account of him being a bad-ass and all. He is voiced, terribly I might add, by Mike Patton of Mr. Bungle, Fantomas, and Faith No More fame. He starts the game in prison after the events of the NES adventure because of a betrayal by Commandos Super Joe. Radds cyborg arm is infused with the soul of of his wife, who was killed by Joe so that Radds arm would work better. Because of the well-known link of prosthetic death machines and loved ones making for better.... sigh! Yeah, its Serious Business in the silliest way possible. Back in the day, Spencer was just rad(d). He also had red hair and wrap-around glasses!

The NES game was known for giving you the arm in lieu of the jump. Patton-Commando can do both, somewhat diminishing the uniqueness of the original. The original is very difficult, like many NES games. This is mitigated by being 2D. Certain things work well when you have only a 2D plane to deal with, and instant death traps in 8-bit games are the custom of the day. Having essentially instant death that puts you back 5-10 minutes in a modern 3D game is practically unconscionable, and it happens in BC09 copiously. I know it they did it then, but they did a lot of things then. Like buy Fido-Dido binders and pencil cases. Some things have to change, to be modernized smartly. 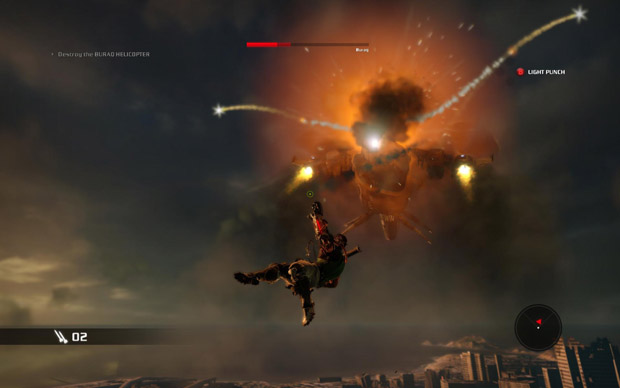 BC09 is not only hindered by this 8-bit/modern identity crisis, but also what it wants to do as a modern game. Can Radd explore? Or is it just linear? Its both, sort of. Radd can grapple to almost anything, but doing so is not advisable. Instead of just having invisible walls, or smartly designed barriers, Radd can explore almost anywhere only to be killed by a plot contrivance (radiation fields) or water traps. If you werent meant to explore there, why give the player the option? Most games reward this sort of exploration, whereas BC09 makes sure you regret it, every time.

For these reasons, the first third of the game is an agonizing experience. You have no power-ups, youre in these punishing environments where the radiation fields are not plainly visible, the shooting feels low-impact and generally sucks, and the collectables do no more than unlock achievements and cause your demise. But then something happens. Maybe the first bits of the game was made by gormless hobosthe story certainly wasbut after that dire beginning, the game begins to click. Your arm feels cool. You can not only climb around with it in the increasingly more awesome stages, but you can also chuck cars, street signs and dudes around. It feels rad to swing in on some guys, throw one into the ocean, crush some with a vehicle and shoot the remainder in the face. If you are feeling pedestrian.

Its also cool feeling the verticality of the stages. Climbing up a gigantic tower overlooking the city and battling a helicopter, swinging between the girders. It feels cool to recover from a poorly made jump by cyborging your way to safety. It feels cool to see instantly what you can swing from, have it be most things, not have it as an obvious Zelda-style grapple point, and for the whole thing to move seamlessly. All the while the game has fantastic renditions of classic Bionic tunes to keep you in the mood, something other games have failed to do (read: Lords of Shadow).

The game owns the arm mechanic. Many games (Zelda, Arkham Asylum, Castlevanias IV and Lords of Shadow) have grappling hooks that are used as pretty much doors/locks: you cant progress this path unless you have the hook. BC09 uses it as your main mode of conveyance and as a powerful way to attack. Despite adding the jump, it uses the arm as effectively as the original, just for a different style of game. The game has myriad failings, but what it does right is amazing. 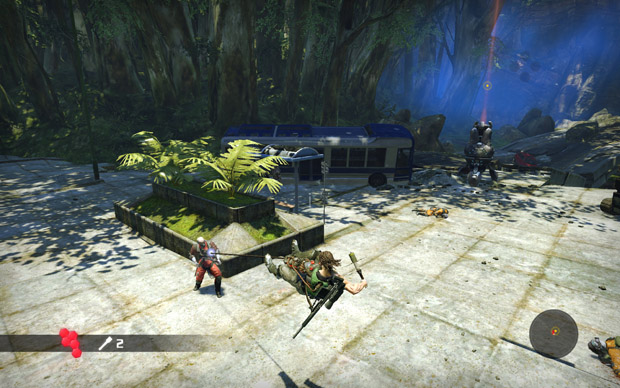