There are many things that come to mind at the mention of Metal Gear Solid; perhaps the overdramatic story sequences, the superb voice acting, the ambition of creator Hideo Kojima, or even the standard-setting E3 trailers of yore. One thing very few people seem to remember, though, is the sublime gameplay typical of the series. Underneath the hype, the noise, and even the pretension, there is a rock-solid foundation of pure game. This can be said of every title in the series to a degree, but is perhaps most true of the original MGS, which took the new frontier of 3D action and crafted a tight, compelling, and purely fun play experience. Its a shame that tends to get lost underneath the rest of the franchises reputation. Wouldnt it be great if one could spend hours upon hours with those gameplay systems without having to skip plot scenes or retread the same 20-or-so maps? It turns out Hideo Kojima thought so, and crafted 300 additional VR missions for the games Japan-only Integral re-release. These new stages, which would become the separate MGS: VR Missions in America, provide a focused experience that highlights just how solid Metal Gears gameplay actually is.

The whole VR Training concept started in the original MGS as a way to offer a tutorial to players who needed time to adjust to 3D without interrupting the main game or forcing ridiculous conceits like Mei Ling explaining to Snake things that any trained soldier would already know how to do (with the added bonus irony of information Mei Ling and Snakes other contacts actually do spoon-feed him throughout the game). Basically, onboard the Discovery submarine pre-mission, Snake underwent a series of VR tests in a green, digital representation of battle. Whether he did this in a Danger Room style setup, with a fancy computer helmet, or with a Kinect prototype is never detailed. Long story short, VR Missions shoehorns itself in as extra missions we werent aware Snake underwent in that time. This was typical Kojima mind candy, as excelling at VR Missions really would increase your skill with the main game, turning you into the perfect Solid Snake Simulated Soldierseriously. 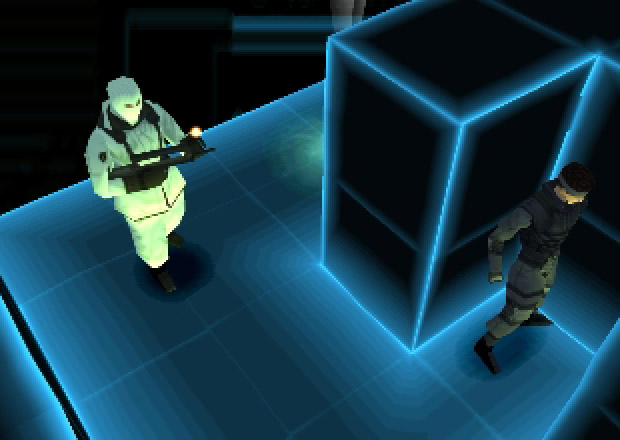 However, once youre actually playing the game, all this plot posturing goes out the window and it boils down to you, controlling Snake, in a carefully structured and crafted environment with a single purpose. That purpose varies on the mission selected, naturally. A bulk of stages revolve around Snakes specific weapons -- these start with basic knowledge (toss a grenade between two targets to detonate them both), move on to clever tricks (plant C4 on a wandering guards back to blow his mind from a safe distance), and escalate to exacting (navigate a multi-tiered maze with a single Nikita missile to hit a guy above/below you). Since MGS isnt all about killing dudes, there are also requisite Sneak missions, designed to hone your stealthing abilities. Other missions break down into various categories, from "Puzzles" (domino-effect a series of guards) to NG Missions which are a mish-mash of objectives such as dragging an aroused guard to the checkpoint. There are even modes allowing Snake to solve a series of murder mysteries, or fight a gigantic city-stomping Genome Soldier. And, once youve mastered everything else, there are three Ninja missions, allowing you to take control of the elusive Cyber Ninja (and beta test the controls for MGS2s primary lead in the process, it turns out!). The one thing these varied stages have in common, of course, is they grant the core gameplay center stage without any distractions. The fact the same controls that conquered Shadow Moses can extend to so many disparate goals is a simultaneous lesson in both versatility and simplicity.

Small, bite-sized stages? Singular objectives? Limited available actions? If this doesnt sound like the Metal Gear Solid you remember, thats okay. In some ways, VR Missions has more in common with Adventures of Lolo than Guns of the Patriots -- but thats only on the surface. VR Missions provides a true video game experience in the MGS universe. It proves there really is an identifiable reason that some games rise above others, and why Metal Gear Solid itself was held for so many years as one of the industrys greatest accomplishments. If a game has cutting-edge visuals but has not solid gameplay, it is a tech demo. A game can have a carefully planned narrative, but without compelling gameplay its nothing more than a Xeno-title. Anyone who wants to understand the difference between decent games and great games owes it to himself to give VR Missions (or its younger brother MGS2: Substance) a spin. If a titles core gameplay cant support 300 mini missions, then all the government conspiracies and transparency shaders in the world wont turn it into a classic. If nothing else, Metal Gear Solid: VR Missions is a testament to the intricate and rewarding gameplay that makes each MGS remarkable... when were allowed to actually play them, that is. 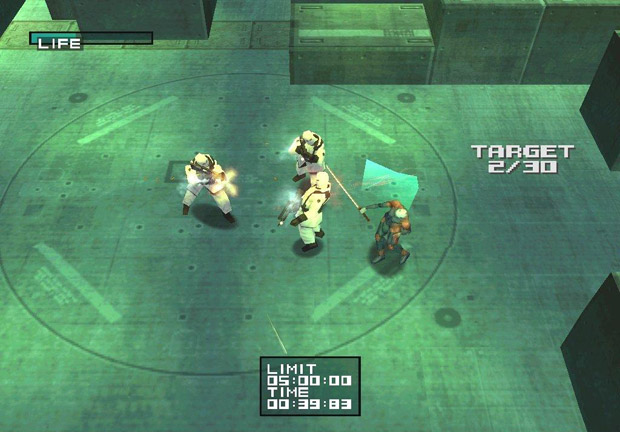