If you wanted to call SaGa Frontier 2 an unplayable mess, few could argue with you. SGF2 is one of the least playable Japanese Role Playing Games ever made. Its mechanics are extraordinarily oblique, at best. New abilities are learned randomly, but the specific ability you learn is partially based upon your actions during enemy encounters. As a result, each time you learn a new ability you never know if its due to the way you played or random chance. The degree of control you have over learning new abilities is never fully elaborated upon in the game. This, combined with the fact that characters statistics increase randomly as well, makes character growth the very definition of a crapshoot.

As if all of that werent enough, enemies in certain areas can be ruthlessly difficult. There are a few spots in particular where the game is simply broken. Progressing through these segments relies entirely on pure, unabashed luck. And lets not even talk about how SGF2 has three different battle systems, all of which function under entirely different rules from one another. 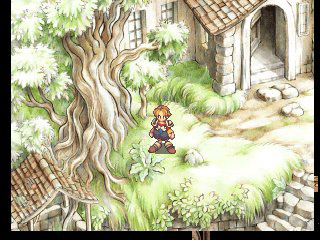 Thankfully, despite how often frustrating (and occasionally infuriating) the core gameplay is, the aesthetic elements of the game more than make up for the gameplays shortcomings. Featuring some extremely well drawn sprite work on top of watercolor painting backgrounds, SGF2 has an incredibly unique medieval-Germanic-meets-Winslow-Homer look. Masashi Hamauzus beautifully arranged soundtrack features lots of classically inspired piano work, as well as a healthy dose of progressive rock elements. Several musical themes are woven throughout the adventure, lending some consistency to a game that at times seems to revel in its randomness.

SGF2 progresses in a non-linear fashion. Scenarios are chosen from a map of the fictionalized 13th century Europe-like continent where the game takes place. New sections open up as you complete available scenarios (imagine implementing a Mega Man stage select screen in an RPG and youre not too far off base). The games non-linear nature can admittedly be a bit confusing at times. Sometimes characters will appear abruptly and without introduction, only to have their origins and relevance to the story explained at a later (yet chronologically earlier) time. Mercifully, should you ever get confused (and you likely will), a helpful timeline is always there to help sort things out for you. 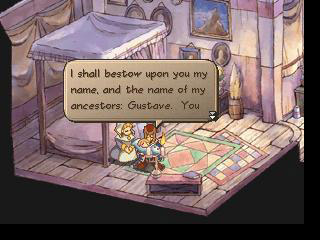 Perhaps most importantly, SGF2s story is one of the best JRPG stories ever told. In a genre dominated by angst-ridden pretty-boy antagonists aspiring to Godhood and the spunky teenagers who set out to stop them, SGF2s primarily politically tinged story is a breath of fresh air. While there is some world-saving in the latter stages of the game (it is a JRPG, after all), the game never focuses on one of its two separate storylines over the other. Main protagonists Gustave XIII (an exiled prince who attempts to regain power) and Wil Knights (a young man looking to strike it rich) and their descendants each influence and change the other characters storyline in ways both blatant and subtle. You may only feel the repurcussions of a given section of the games storyline 20 hours of gameplay later in the other scenario. Its admittedly not for everyone, but if youre willing to play by SGF2s strange rules, youll be rewarded with an engrossing experience.

As far as gameplay is concerned, SGF2 is a mess. That said, SGF2 does so many other things right that its hard to dismiss the game outright. Amazing art work, interesting characters, a complex and original story, fantastic music, and a unique presentation combine to overpower the messiness of the gameplay and create a game unlike any other. 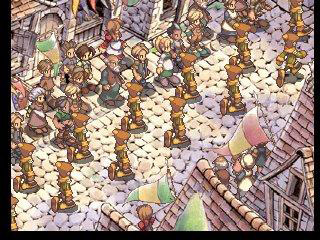