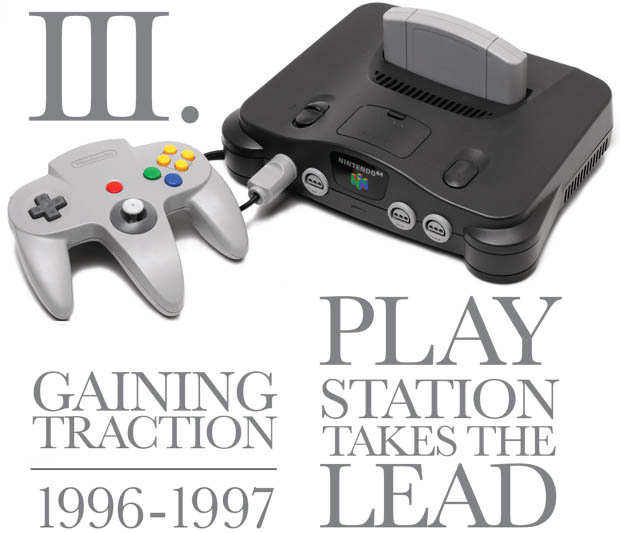 1996 was a tough year to be anyone but Nintendo. While the fractured console market of the early 90s had finally shaken out to three real competitors -- specifically, Nintendo, Sega, and Sony, with Matsushita tagging along as the only would-be powerhouse with its half-hearted overtures about some sort of 3DO follow-up -- the Ultra 64 had finally worked through its delays, taking form as the Nintendo 64 with a summer/fall release plan for Japan and the U.S.

As denoted by the 64 in the systems name, Nintendo was skipping directly over the 32-bit processor families used in the PlayStation and Saturn and right on to the next level of sophistication with a custom 64-bit chip developed specifically for gaming. It was, Nintendo purported, a member of the same family used for the rendering farms responsible for Donkey Kong Countrys visualsthe intimation being that it would produce DKC-quality visuals without the need for pre-rendering. Visuals on par with Jurassic Parks CG dinosaurs were promised... and then, to back up their words, Nintendo dropped Super Mario 64 on the world.

It wasnt difficult for gamers to look at Mario 64, think back to Super Mario Bros. on NES and Super Mario World? on Super NES, and do some extrapolation. Nintendos consoles had always launched with Mario games, and those titles set the standard for a generation of game design... but by the time those consoles were retired, the graphics and design of those Mario launch games felt simple and dated by comparison. If N64 could produce something like Mario 64 right out of the starting gates, imagine what its games would be like in 2001! 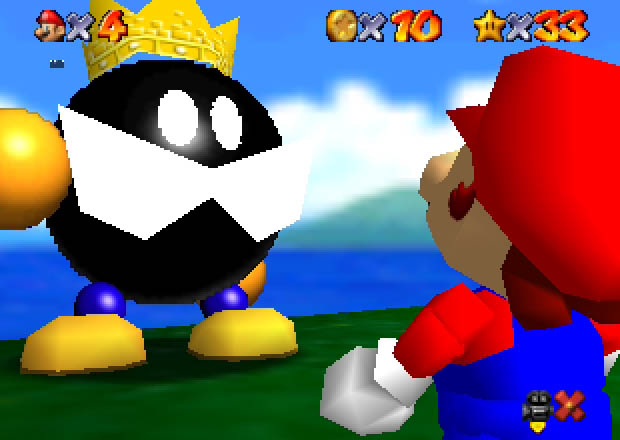 Nothing on PlayStation could begin to compare with Mario 64. Naughty Dog gave it the ol college try with Crash Bandicoot, and Crash looked pretty great. Not as great as Mario, but crisp and fast-paced. But it wasnt a true 3D platformer so much as a 2D platformer with the camera perspective shifted 90 degrees; its simple tunnels of pits and boxes scrolling into the screen were no comparison for the vast, open, free-form worlds of Mario 64. (And the less said about Bubsy 3D, the better.) The strongest retort PlayStation could offer was Tomb Raider: definitely a smartly designed game, but a slow-paced and clumsy one compared to Marios gleeful real-time freedom... and one that actually launched first on Saturn by several weeks.

But if things seemed dire for Sonys new hardware, its only because the impression Mario 64 made was so profound that it briefly blinded everyone to everything on either side of September 1996. Like the metaphor of a weighted ball on a rubber sheet, Mario distorted the fabric of the gamers attention span. But the further away you looked from the N64 event horizon, the less its influence. From the broader view, Mario was a single massive presence surrounded by a spartan scattering of lesser N64 titles. Meanwhile, the PlayStation market was just shifting into high gear, and third parties were quickly coming to appreciate the power, flexibility, and relatively low production costs of working with Sonys hardware. On N64, outside of Mario and a steady but sparse flow of first-party titles, the N64 offered games from a so-called dream team consisting of not-quite-heavy-hitters like GameTek and Acclaim. Cart-based N64 games were expensive for publishers to manufacture, and they passed the lack of savings on to consumers; third-party carts clocked in between $60-70, sometimes more. N64s vaunted graphic prowess turned out to be somewhat exaggerated, as it actually pushed fewer polygons than the PlayStation, and its forced anti-aliasing combined with extremely sparse storage and RAM space resulted in fuzzy polygon edges and low-resolution textures that made most games look dreary and out-of-focus. It soon became evident that Mario 64 wasnt a dazzling precedent or herald of the future but rather a stark exception. 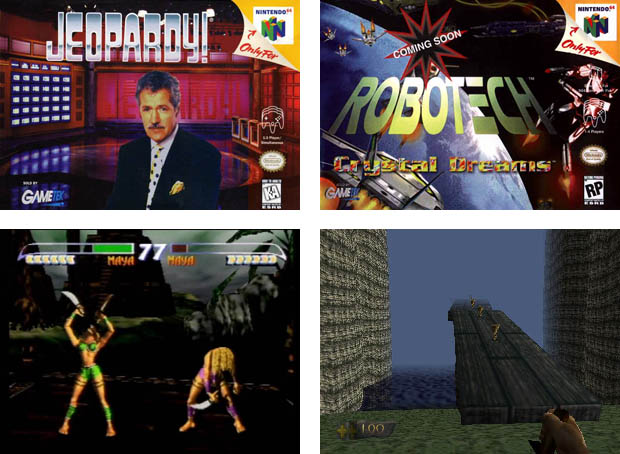 On the other hand, while PlayStation lacked a medium-changer on the level of Mario 64, what it did offer was sheer variety and depth of content. By the time N64 rolled around with its handful of launch and first-generation titles, the PlayStation library boasted solid entries in every category imaginable: action (both 2D and 3D), RPG, simulation, sports, shooting, racing, adventure, and more. Third parties rushed to the system, which was both easier to develop for and cheaper to manufacture for than Nintendos platform. The lack of profoundly amazing first-party titles was more than made up for by the sheer breadth of content available; and it wasnt simply a matter of quality-versus-quantity, either, because PlayStation had plenty of masterpieces on offer.

From the outset, the dividing line between Nintendo and Sonys offerings had been etched into the sand. Nintendo would offer a few of its own pricey but top-tier games each year, along with a handful of notable (and expensive) third-party titles. Sony, on the other hand, would focus its internal efforts on quirky, inventive, niche titles while courting outside parties to push the systems technical limitations. The PlayStation had shaky polygons (thanks to its lack of hardware-level perspective-correction) and plenty of load times, but content is always king. Sony offered something to suit every taste. No one who owned a PlayStation would ever find themselves lacking for a selection of excellent, enjoyable software.

As for the third faction in the console war -- Segas Saturn -- it quickly fell into also-ran status. Saturn performed well in Japan, establishing itself in a comfortable second-place position, but Sega of Americas disastrous handling of the system meant that the gamers who had helped Genesis battle Super NES to a split decision in the 16-bit war flocked in droves to PlayStation, not Saturn. No, the real battle was waged between Mario and the sheer bulk of Sonys library... and by the end of 1996, the tide began to turn as Mario alone found himself unable to push back against a crushing mass of excellence. 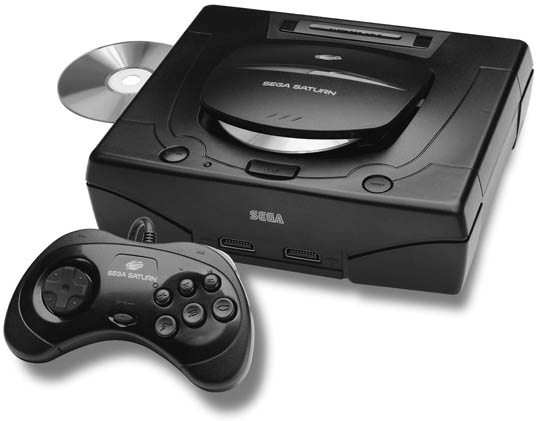