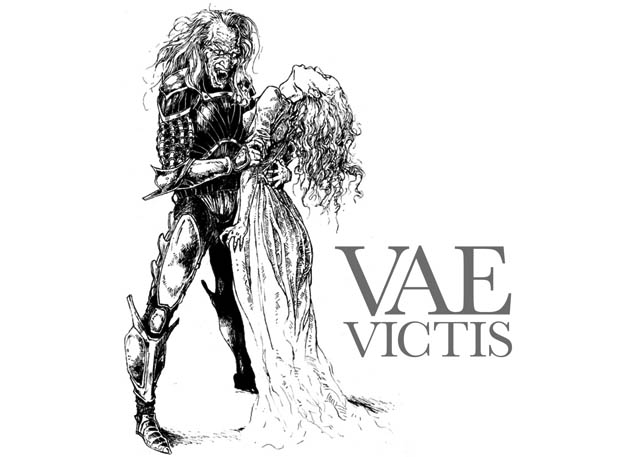 How important is storytelling in gaming? Generally speaking, it isnt, really. The stories in games are just thin excuses for putting your character in their current state of conflict. Resolving this conflict, whatever it may be, is the game. The story is just a framing device. In the canonical story of Final Fantasy IV, did our heroes really run around in circles outside the dwarf castle to gain experience to fight a bunch of evil dolls? Wait! How did they know the dolls were even there? I failed that encounter, not Cecil and pals! (Fiction unravels, universe torn asunder.)

Even as framing devices, game stories fall flat, and story-heavy genres like JRPGs can seriously drop the ball sometimes, ranging from completely incoherent (Final Fantasy XIII, Xenosaga) to just plain embarrassing (Final Fantasy X? and X-2). Despite all these failings, games are like, really fun, right? You can play the game portion and enjoy the story elements for what they are, or enjoy the game in spite of the inanities of the plot. The game part should come first, right?

Storytelling in console games was irrevocably changed when the industry embraced the CD format. Lines of ill-translated or poorly written dialogue could now be replaced with lengthy cinemas. Full-motion video was exciting and seemed to elevate the story telling in RPGs and adventures to the possible detriment of the games themselves. Games of that era do not age well, though. All of these advancements were technological in nature and thus surpassed. Clouds ever-changing model was awe-inspiring then but laughable now, as any console on the market can now render his once-breathtaking CGI cut-scenes in real time and probably in HD. Infinity Blade on iOS kills all the best cinemas of the PlayStation/PS2 era graphically. And its on my phone. 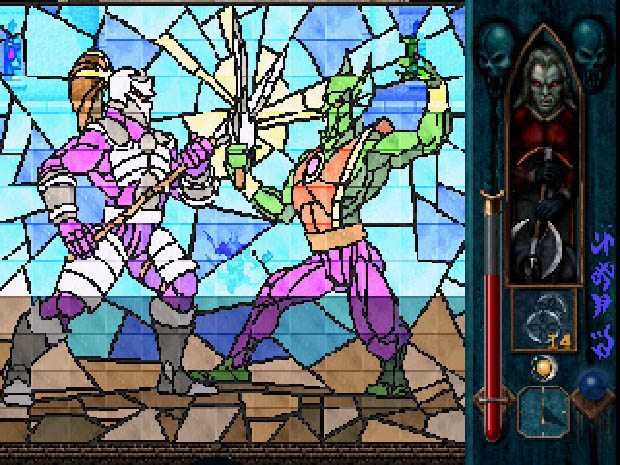 Design was also hurt here. It was an experimental age, and game developers were unsure how to use the space afforded to them on the CD format. Squares 32-bit RPGs had a certain flow to them, dramatic beats dictated by number of discs. It also seemed to defer full world exploration till later in the game. In earlier Final Fantasies you could get a airship relatively quickly and explore at your leisure. PlayStation era FFs left this to a disc 3/4 situation. Games could also be affected by load times. Resident Evil hid its load times with opening doors, but other games sent you to agonizing purgatories for even opening menus.

Due to the upheaval caused by the rapid change of technology, many of these games are hard to go back to, for awkward play, for ugly graphics or just the low-resedness of it all. One of the more awkward games of the early PlayStation era is Blood Omen: Legacy of Kain. This one seems to hit all of the vectors above. It plays weirdly, looks crusty as all hell (despite being 2D and not early ugly ass 3D) and has what may be the most infamous loading of all time (so famous that the sequel proudly proclaimed no load times in its print ads!) Despite this, Blood Omen remains a singular PlayStation experience.

Kain is a 2D, top-down, action RPG. Superficially, it resembles The Legend of Zelda -- Kain travels around Nosgoth gaining powers that allow him to further explore the land. He doesnt gain experience, like many other action RPGs of the time (Secret of Mana, Secret of Evermore), but collects life and magic upgrades as Link would. The game is more combat heavy than Zelda typically is, with numerous spells and items purely for you to kill enemies in novel super violent ways. This certainly helped the game stand out. Now games of all genres (save for platformers?) have dipped into the hyper-violent. ManHunt, MadWorld and BulletStorm certainly show things that we wouldnt have even imagined in a game 15 years ago. At the time though it was rather shocking! and pretty cleverly implemented to the atmosphere of the game, truth be told. Sure, we had Mortal Kombat for hilarious over the top violence. But it had no permanence. I mean Liu Kang wouldnt stay dead no matter how many times Kung Lao bisected him, future zombie Liu Kang not withstanding. 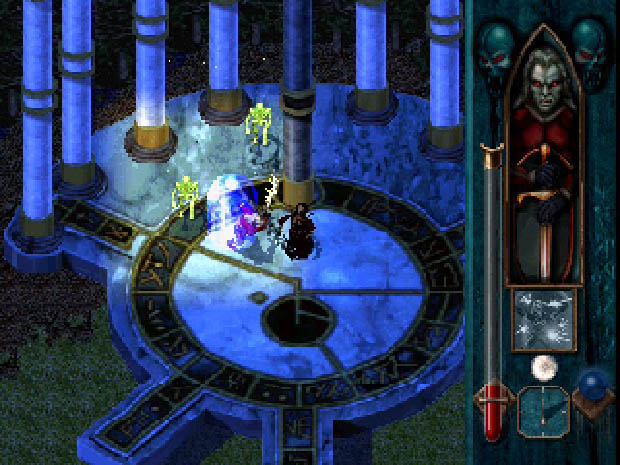 Blood Omen had a little gravity here. It was possible to kill almost every NPC in the game world. True you couldnt talk to the majority of these, but you would certainly miss them if you didnt conserve and wound up in a near death situation with no one left to eat. You could argue why this ultimately matters if NPCs are so inconsequential, but then again, arent they always? It was nice to have the freedom to play the game as a marauder. Link takes everyones crass predations so stoically. Dont make him shovel for an hour, just give him the heart piece already. Hes trying to kill an evil demigod! Again!

Alas, the game doesnt play as beautifully as A Link to the Past. Hit detection is truly lamentable; its hard to tell if you are even affecting the enemy in any way whatsoever; they absorb hits but dont necessarily get knocked back or make any noise until you have them in a stun. Meanwhile, your life will be pissing away as you struggle to move Kains cool-looking but ultimately ungainly sprite into place to actually hit something. Hey thats OK, you say. I have metric ton of these Hearts of Darkness, which, I take it on good authority, are reputed to have been ripped from the chest of the greatest vampire to have ever existed, Janos Audron, and restore vampiric unlife. Life is precious, Janos discoveredas it was torn throbbing and bleeding from his own body. Also they will restore some life and bring me back to life when I am dead, much like a fairy bottle. So thats aces. Sadly, until you figure out how to win without breaking a sweat, being revived by a heart whilst in the middle of a demonic fireball barrage will just allow you to stand up long enough to get beaned in the brain once more.

Most of that can at least be accomplished without screwing around in the menus. This game has a truly epic amount of loading, specifically when you go into the main menu. Luckily, there are quick-loaded actions for special items, magic spells and transformations. Not as lucky, though, is the inability to set a quick load for weapon changes. There is one part of the game where you need to chop down trees with the double ax weapon. The area is surrounded with enemies and environmental hazards that give a poison status effect. You can heal poison with a special item, which can be quick-loaded. Score. The problem is that the axes (and some other two-handed weapons) are such powerful attack options that they are offset by the inability to use items or magic while they are equipped (no free hands, see). You have to go to the main menu to change to sword or whatever, to use the items, and then back to the axes to progress through the tree barriers. The loads can be 30-60 second each way on a PlayStation. Even playing on PS3, they are certainly longer than they should be. No one will begrudge you if you use the blood code here to absorb the punishment. I would even applaud. It takes a big man to know when he is over his head. Yes sir. 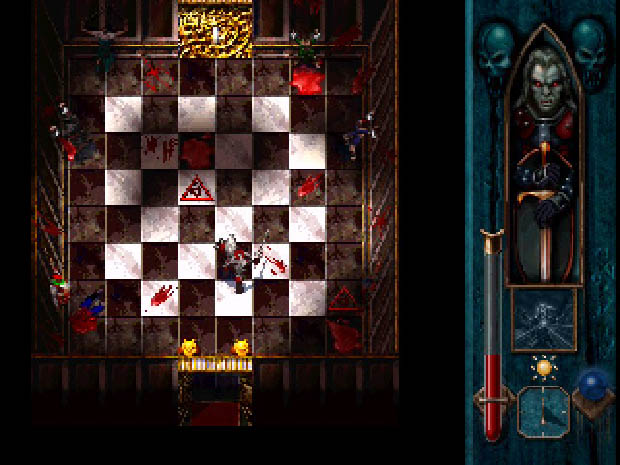 While above I state that stories are a detriment to a game, Kain may have it in opposite. The game may in fact be holding back the story. Certainly playing this game now can be an exercise in perseverance. But something makes it worthwhile. The story is dark and compelling, about a haughty nobleman thrust into the role of a vampire by a bunch of mystical jags. Initially he seeks vengeance for this misdeed and wants to be cured back into human state. But as the adventure progresses, he becomes disgusted with the lies of his alleged allies and the petty machinations of humanity, eventually embracing his vampirism. He does this even if you pick the Sacrifice ending! Even without the caveat of ...for a video game, the story is well-written and pretty cool. It isnt even this that makes the game a treat to go back to after all these years. Its Simon Templeman.

Simon Templeman provides the voice for Kain. Blood Omen features full voice acting, which is probably the reason why you cant talk to most NPCs. This is notable for two reasonseven Square wouldnt attempt this until Final Fantasy X five years later. And they certainly met with, uh, mixed success. Ahahahaha! Too funny! But I digress, especially given the salient point of one Gamespot forum member: So far no ones ever acknowledged the fact that people who understand Japanese may appreciate the scene in FFX more than members here who have criticized the game because of the English dub. Too true, my friend. I dont know how much the rest of you know about Japanese culture, but Im an expert.... 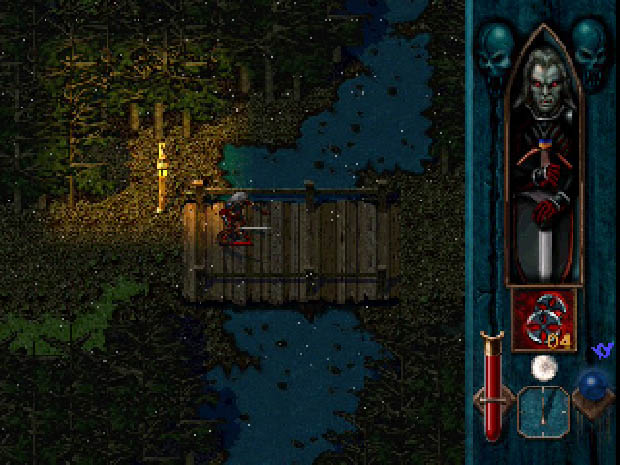 Enjoying Squares early voice work may take heavy amounts of irony, eye-rolling perseverance or, apparently, a Japanese cultural studies doctorate. In stark contrast, Templemans Kain is excellently performed, and puts you right in Kains head. He also seems to talk near constantly. Unlike other PlayStation games where the reward of cinema was doled out at stage ends or dramatic points, Templemans outstanding VO constantly illuminates us to Kains selfish philosophy and cavalier attitude towards the denizens of Nosgoth, rich story details from item pickups (such as the Heart of Darkness -- reputed to have been ripped from the chest of the greatest vampire to have ever existed...) and even in the middle of nowhere. These voiceovers are started inelegantly by icons on the ground, but are nevertheless rad. It allows you to overlook the technical and game design short-comings of Blood Omen. While the game is certainly of its time, the voice of Kain is just stellar voice acting. It allows the game to rise above the sum of its parts. Which is to say, a janky action RPG from PlayStations growing pains.