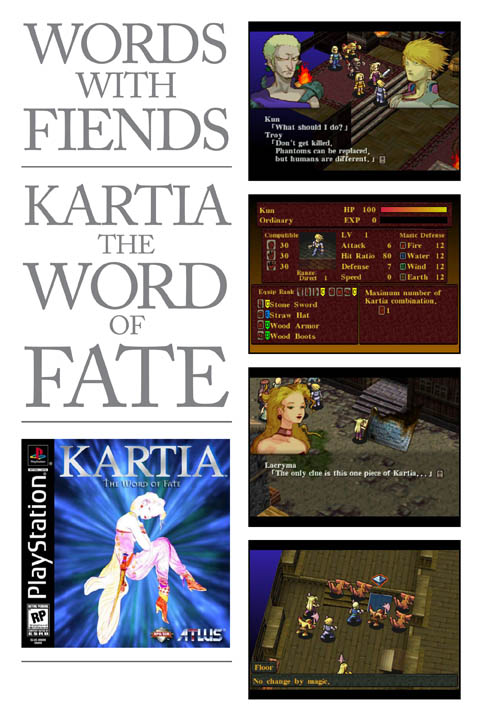 There are only three things wrong with Kartia. It has the same sort of two-sided narrative as Resident Evil 2, but its length is such that the only way to keep the story connections straight is to alternate save files, playing through as both characters simultaneously. It directly translates character designs by Yoshitaka Amano to sprites, leading to some crazy looking hair. And, most significantly, if you react to the fact that the death of any human character means instant game over by building up their levels (rather than hiding them behind disposable cannon fodder), they quickly become downright unstoppable killing machines and negate all challenge.

On the other hand, Kartia does everything else so very, very right. Its a tactical RPG hinged on an incredibly compelling system of magic. Over the course of the game, a huge array of magic words are acquired. When written on special cards and arranged into phrases, these create whatever they spell out. Toss out ice for a simple attack spell. Throw needle in front of it to replace that basic freezing effect with some nice stabby icicles. Need backup? Toss out cow and goblin to summon a minotaur. If it survives the fight, itll be a permanent fixture in your party, so you might want to make it big and tough while youre at it. After the fight you might want to upgrade your equipment. How about summoning up a nice zweihander? Thats just a big gigantic sword after all. Itll be even better if its made of platinum, or white gold as its also known.

Aside from being an awesome backbone to support so many mechanics, this reality-warping magic can significantly alter the battlefield on the fly. Burn down trees and wooden objects to clear some space. Freeze a patch of water for an ice bridge. Use a violent quake or two to lower the terrain under your opponents and gain the advantages of higher ground against them. It factors pretty heavily into the plot as well. Characters are constantly summoning fresh cups of tea while sitting around chatting, breeding the animals whose excretions are used to make the most common cards for scribing spells, and investigating where all this stuff is being summoned from in the first place.

Kartia is also on the shamefully short list of tactical RPGs which feature a competitive two player mode. Arguably, this is even better than the main game, as forces can be balanced much better than the lopsided affairs found in the main game once the humans end up massively over-leveled.