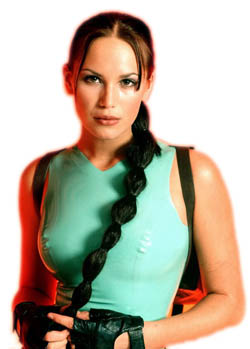 The Tomb Raider series became a defining franchise for the PlayStation, and for years Ms. Crofts persona was inextricably tied to Sony. The funny thing is, Tomb Raider actually debuted on the Sega Saturn, launching there several weeks ahead of the games PS1 arrival. But no one thinks of the Saturn as part of the Tomb Raider equation anymore. This is less a condemnation of the Saturn than it is a credit to Sonys canniness: Sonys executives recognized the gem that was Tomb Raider and quickly moved to wrap up exclusive rights to the sequels, tying the series to the PS1 in perpetuity. The Saturn version was actually quite good, despite its weird innate handling of polygons and general jankiness when it came to 3D. But Sega didnt push the series like Sony did.

Honestly, even Eidos didnt push the series like Sony did. Lara Crofts fame -- the creation of a virtual starlet -- seems largely the doing of the Japanese giant. Certainly that notion resonates with speculative fiction of the era: William Gibsons Idoru was published mere months before Tomb Raider arrived, and Id picked up brand-new VHS tapes of Macross Plus just a few weeks before taking the Tomb Raider plunge, too.

Lara was a virtual icon of western origins, unlike Rei Toei and Sharon Apple, but its hard not to conflate the Japanese fascination for imaginary celebrities -- see both in fiction and reality -- with the elevation of Lara Croft to faux-stardom under the watch of a Japanese corporation. Stereotyping, perhaps, but for once not an unflattering instance of it.