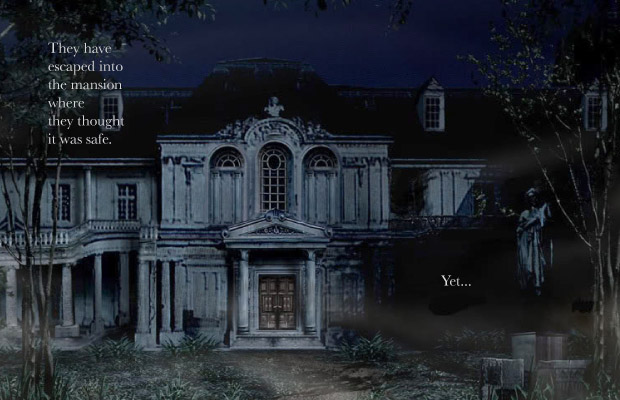 When the PlayStation launched in the fall of 1995, it was vigorously advertised as a console for the more mature gamer. With the ability to generate impressive 3D visuals and CD-quality audio, Sonys first console seemed a natural fit for engrossing, thoughtful experiences for the aging enthusiast. Children who had grown up gorging themselves on Mario and Sonic were now full-fledged teenagers, and as such, demanded experiences that reflected their increasingly sophisticated tastes. Of course, sophisticated tastes often translate to R-rated sensibilities rather than genuine adult themes, and many adolescent gamers yearned for titles with copious amounts of action and bloodshed. And what genre better delivers such wonderfully mindless violence than the classic B-horror movie? Resident Evil, released in the infancy of the PlayStations life, was one of the earliest games to deliver such an experience on the console, and while its subject matter is nothing impressive by todays standards, it was a formative work in the PlayStations early library that helped pave the way for future games aimed at the rapidly-maturing gamer. 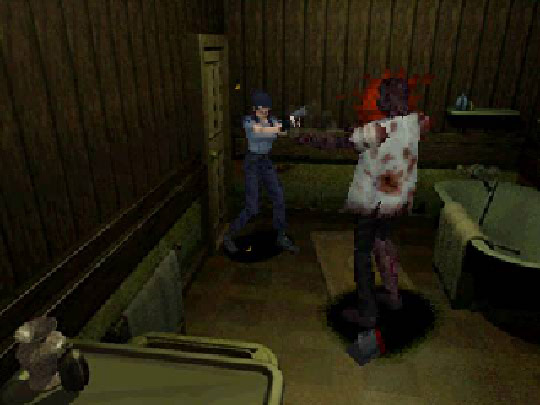 Like any good zombie movie, Resident Evil begins with a small group of survivors trapped in an ominous location, unable to escape. Here, the surviving members of the elite special forces team S.T.A.R.S. find themselves confined in an unsettling mansion in the Arklay Mountains after a search-and-rescue mission gone awry. While the mansion initially appears to be a safe haven, it is quickly revealed to be the site of a laboratory helmed by a malevolent pharmaceutical company, Umbrella, Inc., which happened to had have created a virus that mutates any living creature into an undead abomination as a small side project. The entirety of the game revolves around the struggle to escape the mansion alive, and every horror movie cliché is touched upon at some point (monsters breaking through windows! Zombies hiding in closets and other dark spaces! An allys sudden but inevitable betrayal!).

Technically speaking, the gameplay of Resident Evil was not especially unique. While Resident Evil is considered the progenitor of the survival horror genre, Capcom borrowed heavily from Infogrames Alone in the Dark series, which had debuted on the PC four years earlier. Both games utilized 3D models superimposed over 2D pre-rendered backgrounds, which, at the time, allowed for more intricately detailed environments than if rendered using an in-game engine. Ostensibly pre-made in nature, the camera was relegated to fixed locations, and while this helped create cinematic camera angles that improved the presentation and helped generate suspense, it also created certain limitations to the control scheme. Unlike most 3D games, the controls were fixed; pressing up on the d-pad will always make a character go forward, regardless of the direction theyre facing, while pressing left or right rotates the character in that direction. Needless to say, this unintuitive control scheme was a difficult obstacle to overcome for many, and the derisive term tank controls was quickly adopted to describe the survival horror genre. 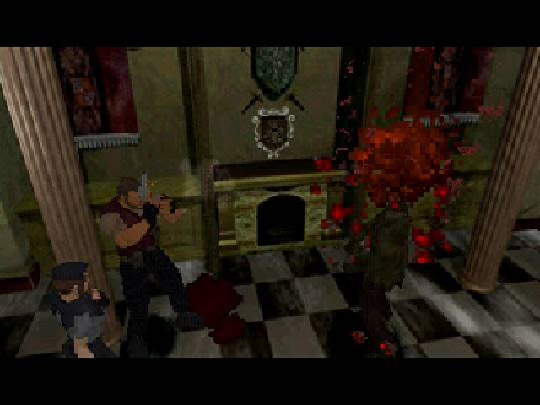 Graphically, Resident Evil was striking for its time. The 3D models for both the characters and enemies were arguably the most advanced on the fledgling PlayStation. The 2D pre-rendered backgrounds were equally impressive, offering imposing, atmospheric environments that displayed an unparalleled level of detail. The soundtrack served as a great accompaniment, its haunting scores fostering a constant sense of tension and dread throughout the omnipresent manor.

While Alone in the Dark may have came first, Resident Evil improved the formula significantly. The former was primarily an adventure game, with enemy encounters and combat taking a backseat to puzzle-solving and exploration; the latter introduced a heavier focus on combat and survival. Limited supplies such as ammo and healing herbs were complemented by equally limited inventory space, which forced players to explore the dangerous mansion with only the barest of essentials. Running from enemies to conserve precious ammunition became a required skill, especially in the later areas where the weak zombies were replaced by infinitely more dangerous monsters such as the Hunters (think a cross between a reptile and a gorilla.) Players controlled one of two members of S.T.A.R.S.: Jill Valentine or Chris Redfield. Jill, being the stereotypical female character, is more fragile than Chris, and only a few zombie bites will fell her. Despite this inherent weakness, Jill represented the easy mode of the game. With two extra inventory slots, a grenade launcher, and the ability to pick simple locks (putting her Masters in Unlocking from Raccoon City University to good use, apparently) Jill had a much easier time exploring the Arklay Mansion. Not to mention her bearded partner Barry Burton, who had a knack for showing up in the nick of time to save Jill from bosses or traps. Meanwhile, the hardier Chris was stuck with less weaponry and an 18-year-old girl who somehow served as the teams lone medical officer. Go figure. 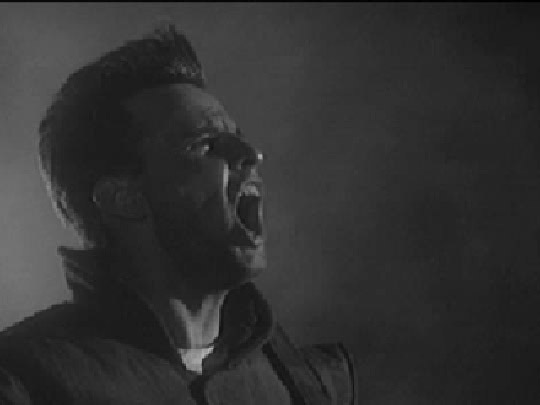 Despite the increased focus on action and combat, Resident Evil still maintained its adventure game roots. The Arklay Mansion was a labyrinthine maze packed with devious, and often nonsensical, puzzles and traps. A series of paintings recording the life of a man guard an emblem needed to open a ridiculously protected door that leads to a mundane tool shed. A secret passage is opened if a pitch-perfect rendition of Beethovens Moonlight Sonata is played on a nearby piano. The zombies may be the most obvious enemies, but the mansion is truly the most dastardly villain of all.

Speaking of the mansion, it reflects an inspiration that is much older than Alone in the Dark. Although Infogrames PC classic influenced the presentation and mechanics of Resident Evil, the mansion design and limited inventory were taken from another Capcom game, Sweet Home. A Famicom game released only in Japan, Sweet Home is in many ways the original survival horror game: Locked in a mansion, players were forced to solve seemingly random puzzles while surviving an onslaught of terrifying monsters and struggling with a limited inventory. Shinji Mikami, the director of Resident Evil, has stated that his original ideas for Resident Evil were drawn from the relatively obscure Famicom classic.

Resident Evil never attempted to hide its cheesy B-horror values; if anything, it embraced them wholeheartedly. Upon starting the game, one is treated to an live-action opening that makes a made-for-SyFy monster movie look like a triple-A Hollywood blockbuster. At this point in the 32-bit eras young lifespan, many developers still hadnt come to grips with modern CG technology, and often relied on tried-and-true methods of presentation, including live-action FMV. Interestingly, the cut scene was heavily censored by Sony, who removed some of the gorier bits along with a scene with one of the main characters lighting up a cigarette. While the PlayStation was slowly bringing gaming into the mainstream, it was still perceived by many as a childs hobby, and Sony was adamantly opposed to depictions of tobacco, a stance that would not be relaxed until later releases such as Metal Gear Solid. Of course, dismembering zombies and other assorted mutants was perfectly acceptable. 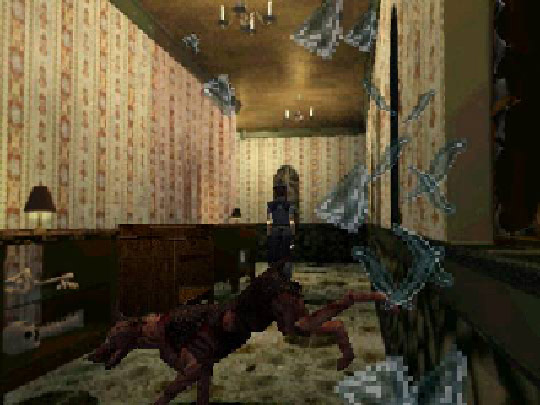 The opening was laughably awful in the best way possible, but the true gem was the atrocious voice acting. Boasting both a hastily translated script and amateur voice actors, Resident Evil was a perfect (if unintentional) homage to B-horror cinema. Awkward phrases littered the game, and their equally awkward delivery resulted in such classics as, You were almost a Jill sandwich! or the infamous master of unlocking line. Combined with the actors propensity to weave in and out of their native accents, the voice work became something wholly unique.

Resident Evil remains distinct even by its own series standards. The monumental success of Capcoms early PlayStation work created one of their most successful franchises this side of Street Fighter. Future Resident Evil games would be marketed towards the growing mainstream market the original helped usher in, with (relatively) competent voice actors and an increasing focus on action and combat. Beginning with Resident Evil 2, the series gradually moved away from B-horror and towards B-action; even the series genre would eventually evolve from survival horror to survival action. Resident Evil had a slower, more deliberate pace; instead of battling through waves of zombies and other assorted creatures with automatic weapons, players wandered through the halls with a paltry amount of ammunition, praying they wouldnt stumble upon a small group of enemies. Resident Evil 2 boasted an impressive seven zombies on screen at one time; here, finding more than two zombies in the same room was a rarity.

Sadly, Resident Evil hasnt aged terribly well. The graphics, impressive in early 1996, are mediocre at best, even when compared to similar PlayStation games released only a year after. Lacking many of the refinements seen in later Resident Evil titles, such as the ability to auto-aim or perform an instant 180 degree turn, the original simply feels clunky by comparison. An excellent GameCube remake, released in 2002, managed to capture the calculated pace and tension of the original while drastically improving the production values and core gameplay, which has only rendered the 1996 release obsolete.

Nevertheless, Resident Evil was one of the first killer apps for the PlayStation, and still remains one of the most memorable and influential games in its library. Though its position as a mature game was only superficial in the way a cheesy, gory horror movie can be considered an adult piece of cinema, it helped pave the way for more thought-provoking games in the later years of the console by introducing an older audience to the hobby. The rich, detailed pre-rendered backdrops popularized by Resident Evil were used throughout the PlayStation era, the most obvious and impressive being in Squares Final Fantasy and Parasite Eve? series. Although the voice acting and in-game cut scenes were less than impressive, they were eventually used to great effect by, among other titles, the definitive PlayStation masterpiece Metal Gear Solid. Resident Evil may no longer be a great game by todays standards, yet its significance to and impact on the PlayStations success as well as the growth of the gaming industry cannot be denied. 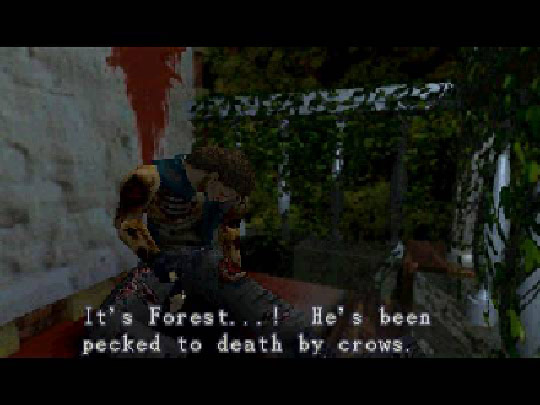