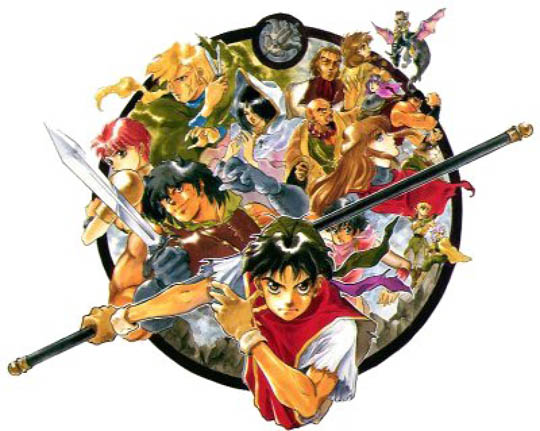 Suikoden arrived in the U.S. before the role-playing genre really took off on consoles -- that wouldnt happen for another year or so -- which means that in many sense, we were lucky to have seen a localized version at all. Still, one cant help but wonder if maybe the cause of promoting the RPG in America might not have been helped along had Konami gone with the games original Japanese box art rather than the hideous abomination we ended up with.

While vaguely anime-flavored, the cover to Japans Genso Suikoden was fairly restrained and not particularly cartoonish; on the contrary, it had a wonderful painterly quality that made it look more like a watercolor or light oil piece on canvas than a cel of animation. Yet for god knows what reason, Konami felt compelled to grace its American release with an airbrushed mess that looked like the cover of a particularly cheap brand of fantasy novel. The young hero was rendered as a thick-jawed 30-year-old, and the games ultimate villain, Barabarossa, was depicted as a sleazy-looking Ming the Merciless type hungry for conquesta far cry from the noble, wistful reality of the misguided ruler.

Characterization aside, the U.S. and Japanese covers couldnt be more diametrically opposed in terms of composition and tone. The Japanese box collects the heros army into a central, mandala-like formation, bursting from their bounding box yet nevertheless contained, giving emphasis to the warm, airy sky. The American art features a ring of characters around an indistinct structure -- Toran Castle, one assumes -- rising out of a cold, cluttered sea. Its as though Konami actively tried to make the two works as different as possible.

A real eyesore. But on the plus side, it provided fuel for worst box covers features for years to come.