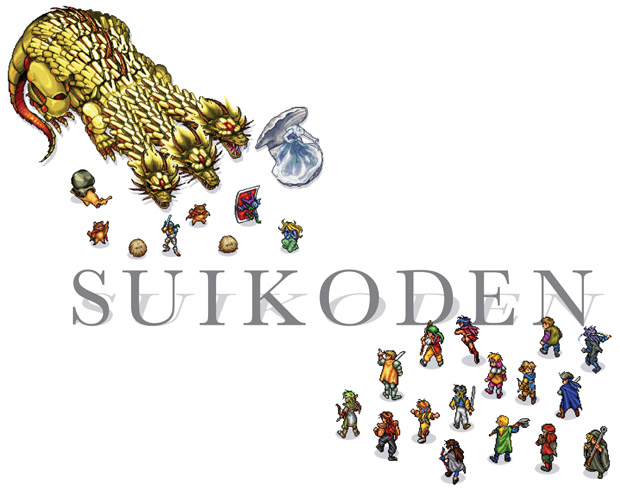 The number 108 commands great meaning in a great many Eastern religions. Itâs the number of names possessed by each Hindu god, the number of steps leading into many temples, the number of prayer beads in a ring. Its pervasive sense of mysticism probably has something to do with its mathematical significance; itâs the product of the squares of the first three whole numbers multiplied and is a factor in determining the so-called golden ratio.

Whatever its history, 108 is one of those numbers that recurs in nature and culture, and now in pop culture as well. Before they knew it as the sum of Hugo Reyesâ cursed lottery ticket and a computer code that could delay the end of the world for another 108 minutes, though, American nerds likely first encountered it through Konamiâs Suikoden and the 108 Stars of Destiny.

The gameâs incorporation of the number 108 isnât a coincidence, of course. Suikoden draws from an unusual mix of sources; it looks like a sort of pre-Enlightenment Europe, all the way down to the vain and mincing French stereotype. Yet the story itself is largely drawn from The Water Margin, one of Chinaâs four great classical novels (which set also gave us The Romance of the Three Kingdoms and The Journey to the West). As such, certain elements of Eastern history and religion are integrated into the gameâs otherwise generic pseudo-Europe, creating a world thatâs nowhere near as mundane as it may initially seem.

On the contrary; Suikoden is a deceptively multilayered game. Itâs remarkably brief (one can easily finish it in less than 15 hours), yet within that compact duration are a complete tale of heroism and loss, solid characterization, and a named cast approaching the hundreds. The Scarlet Moon Empire and its immediate environs are but a small slice of a larger and seemingly fully realized world, and in the course of the adventure, the protagonist -- a young man by the (possibly non-canonical) name of Tir McDohl -- meets people of every possible race, creed, and even species. Itâs a bit of a mish-mash, with elves and dwarves and kobolds living within walking distance of a grand European palace, which is one kingdom over from a Chinese fishing village and whose leaders use a network of ninja for delivering essential messages. But despite the seeming schizophrenia of it all, Suikodenâs world works.

Key to its success, I think, is the fact that every land you explore and every race you meet becomes a part of your own party. Itâs here that the number 108 comes into play, as McDohl slowly assembles an army in rebellion against the Scarlet Moon Empire, which has grown corrupt in recent decades. The Liberation Army, as itâs called, consists of hardened veterans from the last war, defectors from the Scarlet Moon Empire, fishermen, housewives, vampires, ninja, mages, seers, sleazy gamblers, dilettante kids, kobolds and elves, bounty hunters, a team of blacksmiths who learned their craft at the feet of the sequestered dwarves, and dozens of others drawn from all walks of life by the common thread of their confidence in McDohlâs leadership and the righteousness of his cause.

Again, though, the story is more richly realized than your typical ragtag team of rebels saving the world. For starters, you donât save the world; the Scarlet Moon Empire is powerful, but this is entirely a local conflict. Thereâs never a sense that the Empire seeks to conquer the world, and in the course of the adventure you donât even see the entirety of a continent, let alone the whole planet. You fight for justice, assembling an army of citizens who have grown disaffected with the Empireâs callous rule and heartless abuse of its people. Itâs not even that the Empire as an institution is rotten so much as it simply lends itself to the abuse of power by bad seeds within the structure. McDohl himself is the son of the legendary General Teo McDohl, having grown up comfortably in the capital city under the doting eye of his fatherâs retainers. Only when McDohl begins to travel the kingdom and witnesses the greed and corruption of the Empireâs officials does he begin to realize that his life of luxury is built on the hard-working backs of the realmâs hungry, mistreated citizenry.

Suikodenâs story manages to work an impressive number of threads into its brief tapestry. Itâs a story of rebellion and justice and the casting down of an empire in favor of a new republic, yes, but itâs also a coming-of-age tale as McDohl learns to stand outside the shadow of his father. Thereâs no small significance in the fact that every one of the Empireâs generals, once defeated, can be spared and converted to the Liberation Armyâs cause -- every one, that is, except for the faithful Ain Gide and, more importantly, Teo McDohl. Despite his love for his son, the elder McDohl also believes in the Empire for which heâs fought all his life and demands a battle between men with his treacherous son. He cannot be persuaded, only killed in one of the gameâs handful of challenging one-on-one duel sequences.

Teoâs death is one of several personal tragedies that define McDohlâs maturation. Along the quest, he also loses his best friend Ted and his loyal retainer, Gremio, whose death is easily the gameâs most heart-wrenching as he sacrifices himself to save the rest of the party from carnivorous spores. His dying words of encouragement from the other side of a thick door -- upbeat even as he goes blind from the sporesâ predations -- remain with the hero as a potent reminder of his cause.

Yet these losses are more mere personal tragedy: they connect Suikodenâs regional conflict to the much larger scheme of the series, the story of the 27 True Runes that are said to have created the world. Early in the game, McDohl becomes the bearer of one of these runes, the Rune of Life and Death (better known as the Soul Eater), which grants its user both agelessness and immense powerâbut only at the cost of devouring the souls of those he loves the most. Ted, Teo, and Gremio were fated casualties of the Soul Eater whose loss was the trade-off for McDohlâs rise to leadership. Here again does the number 108 come into play, this time for the completist. Should you manage to track down all 108 Stars of Destiny -- embodied in the recruitable members of the Liberation Army, key allies who bolster the armyâs ranks within Toran Castle -- the 107 living Stars themselves will come together through the Gate Rune to restore Gremio (the Tenei Star) to life.

Suikoden offers a lot of substance, despite its brevity. Despite being an early PlayStation RPG, itâs reminiscent of Super NES RPGs in many ways; Iâve heard fairly substantial claims that the game began life as a Super NES title but ended up being reworked for PlayStation. This goes a long way toward explaining why it lacks so many of the issues that plagued its contemporaries. The game moves at a lightning pace, abetted greatly by the load-free battles: most fights can be bested by using the auto-battle command (seemingly inspired by the original Breath of Fire, whose combat system Suikoden closely resembles), and you load and conquer an auto-battle fight in the time it takes to load a combat scene and execute a single command in Final Fantasy IX.

The tradeoff is that Suikoden doesnât look much higher-tech than a Super NES game. Aside from a few spell effects and the tilting plane of the combat field, Suikoden could have been rendered on just about any 16-bit system. Thatâs certainly not a bad thing, though, as the 2D visuals are nicely drawn with hundreds of uniquely sprited characters, dozens of whom are given a full array of combat animations for battle. As it is, Suikoden had just enough graphical flourishes to allow it to pass through Sony CEAâs publication standards, but still looked humble enough to zip right along without drawn-out loading times or tedious lip-flapping.

Konami managed to make a mess of the series in later years, beginning with the way Suikodenâs masterpiece of a sequel was released simultaneously with Final Fantasy VIII, the single most highly-anticipated RPG ever published on PlayStation and seemingly ending with the decision to abandon the seriesâ compelling world in favor of a charmless DS spin-off, Suikoden Tierkreis. As with so many classic franchises, the present reality of the industry isnât exactly a friendly incubator for its continued growth... but no one can diminish its former greatness.

Suikoden wasnât the first PlayStation RPG, but along with Revelations: Persona, it was the first to hint at the role-playing juggernaut the platform would soon become.