Games | Weekly Game Releases | Week of Aug. 28, 2007: Welcome again to Coming Soon for the week of August 28th. This week sees the release of one of the Wii's most anticipated titles, as well as two major PS3 releases. Shouldn't we be more excited than we are?

And that's it for this week. Tune in next time for more games that nobody really wants to play, and maybe one that a few people will pick up. Until then, here's a screen grab from the great franchise mashup, "Lonesome Gundam." 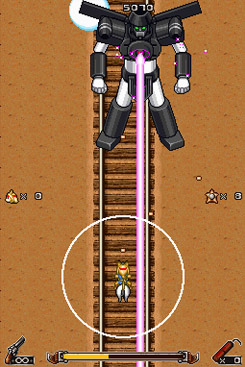 Now we know how the West was won: Giant robots.

Pick up Metroid and wanna talk about it? Then come to the Fun Club thread for this week!