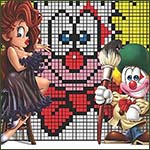 Puzzle Mate trilogy
Compile Heart | DS | Puzzles, mate
A set of three games from Compile Heart -- you know, the last desperate remnants of legendary shoot-em-up creator Compile -- that are bound to be lost amidst a blazillion other games of its ilk on DS. The cover art looks to be painted by the guy who does Weekly Famitsu's cover, which pisses me off. I'm not a very good Japan-game-obsessed whitey, I guess, 'cause I can't stand that dude's art style. Anyway, this image is taken from the series' graffiti puzzle entry. 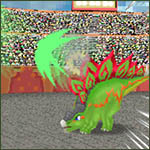 Bokura wa Kasekihorida
Nintendo | DS | Digging in the dirt
I think this game is the sequel to Spectrobes. It sounds like it: you dig up fossils in order to bring extinct species back to life... then force them to do battle. Either way, this is the kind of game that would have been some sort of homily about the arrogance of mankind playing in God's domain if it had come out in the post-Jurassic Park world. But it's arriving in the post-Pokémon world, so I assume the lesson is going to be that forcing lovable monsters to cockfight to the death is totally sweet.