A lot of old games are difficult. That most of us were children during the time of 8-bit games and thus patient and starved enough for this sort of entertainment means we didnt fully realize it at the time, but looking back we can easily see the truth. Those old games are frequently controller-thrashingly hard, and not in anything approximating a good way. They often leave one with the sense that perhaps the developers didnt actually play what they were making themselvesif so they wouldve certainly understood that, say, the speeder bike levels of Battletoads are stupid hard and shouldve been removed. Well, we can at least hope that they would.

But what weve lost in the way of small development teams being able to execute a top-class game like Mega Man 2 all on their own, weve gained in the actual playability of our games. Its a sad fact that growing up I saw very, very few game endings because they were seemingly impossible to reach. Ive found few things in gaming as revelatory as my initial discovery of VGMuseum.coms archive of game endings; I spent ages parsing through countless series of screenshots I was never able to behold as a child due to insurmountable obstacles.

Herein lies to the key to God of Wars success: It largely stems from Sonys Santa Monica studio prioritizing play-testing as a part of the primary development cycle rather than an afterthought at the end of the project. When describing what separated God of War from similar titles to eurogamer.net, creative director David Jaffe stated in no uncertain terms, Lots of play testing. We play-tested the crap out of this game to make sure it was balanced, not too hard, not too easy. We were always looking for that sweet spot where the average player was engaged.

for most people, a game that is too hard is not fun. I know there are the hardcore Devil May Cry 3 and Ninja Gaiden Black' fans out there, and God bless them. I could never play at the level they play. But for most people, hardcore mastery of a game system is not fun. Instead, most folks are looking or a great, interactive ride. And most folks want to be able to play through the whole game and not get stuck 30 percent of the way in because the difficulty ramps up to crazy levels. We wanted players to finish and see the whole story of Kratos.

So, while God of War was functionally very similar to just about every other action game of its time, the level of play-testing and balancing invested into making the entire game fun to a broad audience was exceptional. Not that other elements of the game werent polishedits engine that rarely dropped below 60 frames a second and made the PS2s aging hardware look nearly next-generationbut its technical prowess wasnt fully unique. As years go by, graphics age, but good level-design and gameplay doesnt. 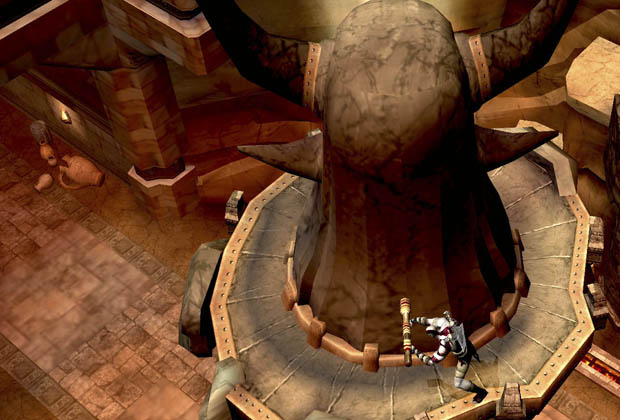 God of Wars levels move smoothly, paced to intersperse combat with puzzles and occasional exploration in a fashion so seamless that the games flow and layouts seem natural. Achieving this in a world thats in fact quite convoluted and circular is no mean feat, especially considering the number of areas that were dropped at various stages of production. God of Wars team approached play-testing and design like a blockbuster movie, which made the game just as much of a ride as a summer movie event, ridiculous story and all. As a result, the games look and feel mesh wonderfully, matching over-the-top animations with epic scale and predictably absurd violence. Its admittedly not the sort of game that fits everyones preferences, but even the disinterested have to respect how well its concept was executed.

That being said, theres one chink in the games armor that illustrates the importance of the games play-testing point better than descriptions of the games fluidity possibly can. Despite its status as one of Sonys premiere games, God of War still had to meet a deadline, and when push came to shove, certain elements had to be left incomplete. In most cases, these didnt cause any real problem for the games overall experience. You can definitely feel the loss of certain bosses and mechanics that didnt make the final cut. With playability as the games key claim to greatness, though, leaving out half-finished mechanics is one of the best things about the game in comparison with its predecessors. 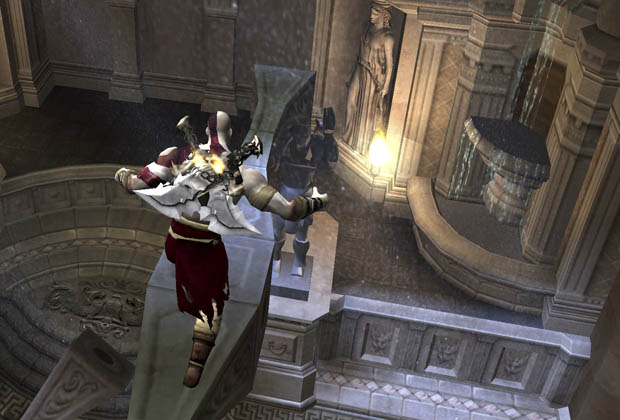 Ultimately, only one section of God of War seems sloppily executed and tends to slow down for players, even upon multiple replays. During Kratos short sojourn in the underworld, he eventually finds himself face to face with spinning pillars lined with rotating blades. Your goal is simply to climb to the top of these pillars, which wouldnt be frustrating if not for the fact that not only does a single touch from a blade knock you back to the beginning (leaving you quite battered to boot), the pillars are also really tall. Its a tedious affair that not only feels irrelevant to the rest of the gameeven by the most lenient use of the term, it doesnt begin to qualify as a puzzlebut which also truly adds nothing to the game experience.

Most noteworthy of all is that in a game which emphasizes the importance of speed and spectacle, this particular section requires a great deal of patience and repetition. The 15-20 minutes most people spend here in this section arent actually that much, but when the average time for most rooms in the game is two minutes or fewer, it brings the games otherwise exceptional pacing to a halt. Unsurprisingly, it was also the only section of the entire game that wasnt playtested. With the recent re-release of the game on PS3, it was even commemorated with the only gold trophy awarded for a specific challenge, since going past these spiked columns without being hit really is on par with beating the game in under five hours.

Fortunately, one lousy room does little to tarnish God of Wars overall quality. And it serves as a valuable demonstration of just how well-tuned the rest of the game truly is. The bulk of God of War rose to the heavens through play-testing. While creating a nearly flawless game certainly seems easy enough on paper, one need merely to play any number of the less polished (and thus more frustrating) action games to have arrived in recent years to see how difficult a proposition it truly is. Luckily, the current generation is merciless for badly made games, and more and more developers are looking to Sony Santa Monicas example for inspiration. Few changes in gaming are more welcome than the fact that the worst portions of games like God of War are becoming the exception rather than the rule.