Castlevania II: Belmont's Revenge owes its existence to one thing, and that is the fact that there was no other way Konami could ever have lived down The Castlevania Adventure.

That's the cynical view, anyway. To put it more kindly, even after the first Game Boy Castlevania turned out so half-baked, Konami probably thought doing right by one of its most beloved franchises on a handheld was worth a second attempt. And in many ways, the sequel is an admission that Adventure was almost on to something good. Some of the first game's staff even opted not to resign in disgrace, and it's clear now that their past transgressions were more a result of inexperience rather than a dearth of talent; two years was evidently all the time they needed to hone the skills required to create a first-class Game Boy title. And while the staff actually number fewer than the previous game's, they're the same four individuals who produced Operation C, another portable classic from earlier in 1991. In particular, the involvement of Toru Hagihara, who would go on to direct the climax of the Castlevania series in Rondo of Blood and Symphony of the Night, certainly couldn't have hurt. 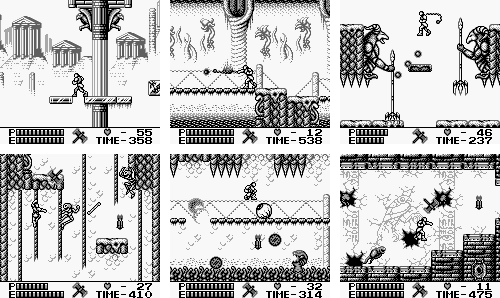 Subtlety: the flowers in the background of the Plant Castle bloom silently as Christopher passes.

Despite the universal revilement of The Castlevania Adventure, Belmont's Revenge stood steadfast against abandoning the unique facets that distinguished the first game from the rest of the series. Even after the release of Dracula's Curse effectively set in stone what makes a "real" Castlevania, it was able to separate the practical failings of Adventure from its benign creative odditiesand draw out their true potential. The fully-upgraded whip still shoots fireballs from its tip, for example, but rather than downgrading with every hit from an enemy, it's only weakened by the spheres vomited from the phallic Bunaguchi monster (which are much slower than in the previous game, where they swarmed and rebounded on Christopher with impunity). What was once a constant hindrance against the player's defenses is now a rare ailment which can be predicted and guarded against.

Stairs are still waived in lieu of hanging ropes, but you can now attack while climbing and slide down quickly by holding the jump button. These simple refinements actually make climbing a viable element of level design; inventive devices such as retracting ropes, threads trailing the descent of giant spiders, and systems of alternating conveyor pulleys put it to thorough use. The rolling eyeballs that blow holes in bridges are back, but instead of an abyss waiting below, there's merely an alternate path. Spikes jutting from walls to form footholds, a contemptible trap from The Castlevania Adventure's final stage, return with a single, crucial improvement: the spikes about to protrude are signaled beforehand by a blinking light. Christopher also walks at a reasonable speed, has a sensible hitbox, and isn't asked to make jumps that require foreknowledge of exactly how many pixels he can extend over a half-tile block before falling to his death. In all, the game commendably demonstrates the sterling product its predecessor could have been with just a bit more consideration for the details. 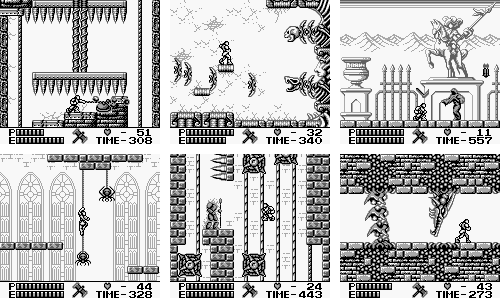 In a welcome concession to the console games, though, Christopher's arsenal has been augmented with two trademark sub-weapons: the Axe and the Holy Water. (Happily, health is once again restored by consuming roasts found hiding in walls, too.) The selection might seem limiting, but consider: everyone knows the Knife is lame, and the Watch is rendered moot by the fact that the game is gracious enough never to throw hordes of Flea Men or Medusa Heads at you. Curiously, the Japanese version exchanges the Axe for the almighty Cross; it's as much a boss-killer as ever, but since the arc of the Axe consistently comes in handy in such a vertically-oriented game, it's ultimately an even trade.

Like the Japanese version of Operation C, Belmont's Revenge makes its initial four stages accessible from the start. But instead of adhering to a linear progression where, say, selecting Stage 4 skips the first three entirely, every stage still demands completion; it's the order that's up to you. Yes, Belmont's Revenge is set up like Mega Manespecially the Game Boy titles, fittingly enough. The Crystal Castle is home to aqueducts that shift in current and hide lurking Mermen; the Rock Castle is measured in shrouded tunnels and spike traps; the Plant Castle overgrown with vegetation (which, amusingly, slows Christopher about to what his normal pace was in The Castlevania Adventure); and the Cloud Castle a steep ascent of endurance. With all of these completed, Dracula's castle finally emerges from the depths, and the endgame plays out in a traditionally streamlined fashion. 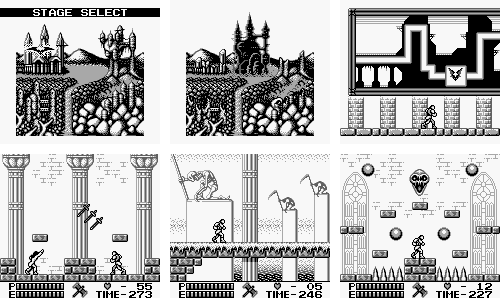 While the final stages are definitely the toughest, it's almost hard to notice when they're so lavish in presentation, highlighting the handsome aesthetics which permeate the game. The stages are adorned with classical architecture and fine decoration, and the bosses are as detailed as they are original. The Iron Doll clangs with the weight of its every step, then sheds its armor to reveal a lanky, leaping abomination; the Twin Trident pinches you between a pair of graven figures come to life; and the Angel Mummy's bones glide with momentum from one serpentine neck to the other. This game also debuted the oft-repeated gimmick of making an enemy of a Belmont type. Here, it's Christopher's son Soleil, whose movements and attacks are as stiff as his heritage would implyalthough Dracula's evil has caused the unthinkable: letting a Belmont use knives to effect. Speaking of whom, the Count has only a single form this time around, but the procession of ominous colossi guarding his lair make a lasting impression to match any giant bat creature.

More than visual fidelity, though, the game's greatest hallmark of excellence must be its soundtrack. Whatever technical wizardry was required to draw an aural landscape with such clarity and dimension from the Game Boy, it surely taps the very limits of the hardware's potential. From the forlorn serenity of the stage select screen to the shredding guitars in "Original Sin," each track's instrumentation is startling in its authenticity. And reinforcing the technology are the compositions themselves; "Praying Hands," for instance, exhibits a brooding melody that gradually builds to a rousing anthem, layering upon itself like a fountain, never a phrase repeating within its ninety-second sequence. Eschewing standbys like "Vampire Killer," the score is filled with such original materialsave for some renditions of Debussy and Bach for effect (which, unsurprisingly, are quite faithful to the source). It's not exactly Symphony of the Night, but it's certainly a direct antecedent; while few other games even entertained such ambition, Belmont's Revenge has undoubtedly the finest soundtrack in the Game Boy's library.

Belmont's Revenge represents one of gaming's greatest cases of redemption from one work to its successor. On the stage of history, the latter exempts the muddied reputation of its lineage, proving that no failure is necessarily permanent. And while one might go red in the face before running out of criticisms of the former, singing the follow-up's praises could likewise leave a guy breathless. I'll leave the rest, then, to one of the Belmont family's most unsung patriarchs. What do you say, Chris?