The poet-thespian Patton Oswalt once condemned the trend in Hollywood of naming films after noncommittal phrases signifying nothing more than a vague sense of toothless sentimentSomething's Gotta Give, Along Came Polly, "Feelin' Sorta Kinda." When titles can be as viscerally descriptive as Texas Chainsaw Massacre, he argued, one that's an obvious afterthought inspires skepticism in the craft of an entire productionoften rightly so. The same is easily true of video games; the bulk of titles within a particular genre are content to limit themselves to a vocabulary of euphemisms evoking some common generality. For shooters (not shoot'em-upsthe other kind), this includes Honor, Duty, War, Combat, and Strike. RPGs revel in Quest, Legend, Fantasy (or "Phantasy"), Adventure, Story, and Eternal. Horror games go with transparently "spooky" nomenclature, such as Dead, Blood, Fear, Suffering, and Condemned. And it's been years since I even humored the notion of telling the various brands of sports games apart.

Many of these tropes were viable descriptors in their earliest incarnations, but, seemingly more than in film, the desire to recreate an existing success includes the impression made by its title. This gives way to an embarrassingly homogenous pool of terms, ironically making clear the lack of creativity inherent in each new knock-off. Castlevania: Symphony of the Night's flowery subtitle is justified in its adherence to the rest of the game's baroque presentation, but in their dogged, incompetent imitation, subsequent installments in the same series rendered the citation of classical music an increasingly empty gimmick. While sticking to a general "x of y" model thereafter, they finally dropped the references just before they got to "Emocore of Acceptance."

Of course, where there's dumbing down, marketing is bound to be involved as well. The title of 2008's strategy RPG Poison Pink didn't survive localization, presumably because the hardcore SRPG audience wasn't trusted to buy a game with "pink" in the title; instead, it was rendered Eternal Poison. One might be surprised they didn't throw "Tactics" on there while they were at it. Then again, publisher Atlus has also done great things with titles. For eample, Japan's Seikaiju no Meikyuu was on track to be translated literally as "Yggrasil Labyrinth" until a variety of factors saddled it with a smoother and more suitably fantastic name: Etrian Odyssey.

For whatever reason, "Odyssey" is one of the few grandiose words that hasn't become meaningless through overuse. But lurking in gaming's history is one that did it even better... which is none other than 1990's Daedalian Opus. Innocuously named Adventure! Puzzle Road in Japan, the glowing majesty and attention-demanding gravitas of its American title is absolutely peerless, indicating nothing less than some sort of ecstatic religious vision on the part of the Vic Tokai employees who chose it. It's a wonder the manual wasn't transcribed from the unknowable tongues of spirits, so rich are the exaltations of this masterwork that is, in fact, an otherwise unassuming puzzle game.

You see, Daedalian Opus is essentially a digital version of Pentomino, a basic puzzle in Japan whose object is to fit all of the titular polyforms into a set frame. The advantage of translating such a system into the videogame format should be immediately clear. In a virtual space, dozens of different frames can be offered within the palm of one's hand; the task of providing such a value then necessitates ingenuity. Whereas most analog versions of Pentomino seem to stand by ordinary rectangles, Daedalian Opus tasks the player to fill shapes of guns and rocket ships. Even frames that aren't cute likenesses of tangible objects pose much more devious arrangements than are possible in a simple quadrilateral. 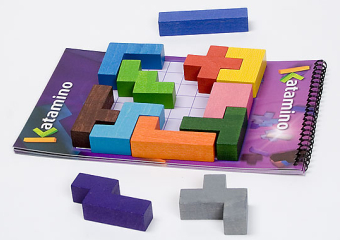 The game's conceits are introduced gently to the uninitiated; the first few frames are patently simplistic, and you begin with only three different shapes to set within them. Completing each of the ten opening stages is rewarded with the addition of another shape to the repertoire, gradually stepping up the complexity until you're finally dealing with the twelve standard pentominos. This is where things start to become serious. A counter keeps track of the time elapsed for each puzzle, but there's no time limit, nor can you ever become stuck. Using every button available on the face of the Game Boy, every pentomino can be rotated, flipped on both axes, and set outside the frame as needed. Likewise, the game extends little praise when you succeed; before moving along to the next stage, a blinking graphic of the word "GOOD" is your only acknowledgement. You can even toggle it off to review a puzzle's solution. However, the difficulty escalates in such a way that solving each frame tends to be a satisfactory reward in itselfprovided it doesn't reduce your brain to sludge beforehand, that is. While cohering formations of pentominos might seem comparable to making lines out of tetrominos in Tetris, the addition of that one square to each polyform ultimately proves to make all the difference. And should you master this paradigm over the course of thirty-five frames, the last stage, a simple square, assails you with a brutal, unprecedented twistthe inclusion of a tetrominofor one final challenge.

The time counter has an hours place, and that's not an idle threat; I once grappled with that square for ninety minutes straight before withering in defeat. Being able to save your exact progress in the middle of a puzzle might have been too audacious an order in 1990, but there are at least passwords for every stageand in a fairly brilliant bit of localization, what were garbled sequences of Roman letters in Puzzle Road were rewritten as simple four-letter English words. No, the game won't become any more lenient if you type obscenities at it, but you can easily access puzzles beyond your reach by trying out words like LOVE, SONG, and RAIN. The only danger, of course, is that out-of-reach stages are that way for a reason, and you could find your present skills inadequate when thrown right into the thick of the soul-crushing endgame. 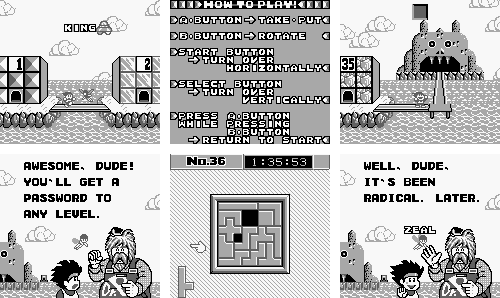 Aside from some sporadic advice dictated by an enigmatic professor (Dr. Kawashima's ancestor, perhaps?), the Japanese title's claim to "Adventure!" is only carried out in brief inter-level cinemas, where the hero is seen walking across a materializing bridge from one puzzle island to the next, occasionally catching a new pentomino as it descends from on high. (There is also a fairy, for some reason.) But in another curious display of vision, these sequences were given to gameplay in the localization, placing the player in full command of your avatar's two-frame walking animation for all of five seconds at a time. Further perplexing the matter, both versions of the game have seven puzzles in the initial thirty-five that are completely exclusive to themselves, while others were moved around in the sequence; the Japanese version also has six additional puzzles between the penultimate and final stages, for a total of forty-two. The game's balance isn't tilted much in either direction by these alterations, so one can only assume that the architects of the American title simply deemed us unprepared for the infinite grandeur particular to the missing frames.

But thank heavens for those lunatics. While absolutely unique, Puzzle Road wasn't quite a progression of the medium. It could only be connected to the Daedalus of myth by some formidable leaps of logic, and to ascribe such ornate terminology as "Opus" to so humble a game is just adorable. But it's precisely thatthe idea that somebody saw fit to raise a meek invention to such a lofty seat of adulationwhich forms the crux of the game's ludicrous charm and upholds its intrinsic merits to this day. Long live hyperbole.