When people talk about Fable II, they focus on the morality system, or the dog, or the aggravating bugs, or how promised feature X wasn't in the game but Peter Molyneux will surely include it via downloadable content or the next sequel. Surely! I'm not here to talk about that. I'm here to talk about the thing Fable II nailed perfectly: combat.

When you first started playing, say, Ninja Gaiden Black, what was on your mind? I'm guessing survival. Ryu Hayabusa could dash through the air and cut a tree in half, but he could barely hold his own against garden-variety ninjas and paramilitary goons. I've never even gotten past the first encounter with Alma; I don't have the skill, reflexes, time or patience to muscle my way through such an infuriating, lopsided boss fight. After a while the game stopped being fun for me, no matter how cool the moves were. 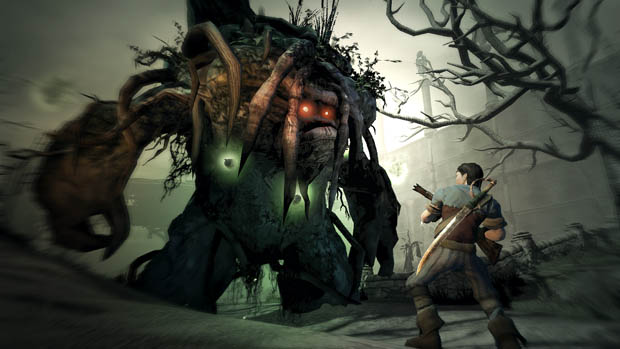 We've all been on the other side of that balance, too. We've all entered a cheat code for unlimited ammo and God mode and blasted our way through hordes of impotent demons in Doom? or something similar. But most games aren't designed with the idea of an invulnerable player character in mind, and so the entertainment value quickly evaporates in these cases as well.

Fable II, however, was built around this idea: its combat isn't great despite the de facto invincibility of the hero, but because of it. Most games cast you in the role of a warrior like, oh, Boromirpowerful, yes, but all too vulnerable to piddling things like mortal wounds. Fighting in Fable II is akin to playing the part of Aragorn. However many enemies you face, however grim the outlook, you will prevail. You're the Hero. The outcome is never in doubt.

Technically, yes, you die in Fable II -- twice. But these are scripted events, unavoidable and plot-related. The worst that can really happen is you get knocked down for a few seconds, then your life bar fills up again and you're back in the thick of it. Maybe you'll get a scar and become a little less attractive, but so what? If you have Knothole Island you can erase them, and if not, scars make for good stories.

Scratch the Aragorn comparison above -- you're really closer to Aragorn, Legolas and Gandalf all mixed together. The disciplines of Strength (melee attacks and toughness), Skill (ranged attacks and defensive moves) and Will (magic) can be mixed and matched however you like. You're never locked into one way of doing thingsyou can trade in your skills and spells for experience to buy different ones whenever you like. Your toughness and hit points are independent of your costume. Meaningful consequences are reserved for your moral choices, and those are all made with no regard to your fighting abilities. You're free to crush your enemies in whatever manner most pleases you. 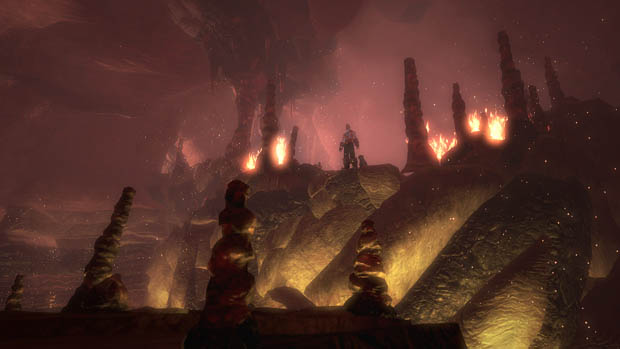 There are various swords, axes and maces to find and buy, or you can customize your own. The defense-smashing (and fairly cheap) Flourish attack is your best melee tool, and the numerous distinct animationsdepending on the weapon used, the direction you're facing and random chancefor the attack make it plain ol' fun to use. Guns and crossbows aren't quite as fun, but it's satisfying to whip out a pistol and plug the guy trying to sneak up behind you while you're locking swords with someone else.

The fighting is actually at its worst when the game tries to mix things up. Usually you fight packs of bandits, goblinlike Hobbes, werewolflike Balverines and swarms of Hollow Men, all of which are open to numerous tactics. Fighting Banshees and Trolls, which both have well-defined weak points and attack patterns, is much less fun -- what good is it to be the toughest hero around when you have to dodge attacks and wait for a Troll's nerve nodes to pop out of its body? Boring.

Magic's where the game really shines. Spells can be charged up through five levels of strength and have different effects whether you're aiming at one enemy or performing an area-effect spell. Open with a mid-level Force Push to knock your enemies down, follow up with a quick Time Control to slow them and buy time for a fifth-tier Inferno spell, and not much will be left standing. Conjure up a handful of glowing swords to skewer that last terrified brigand, collect the cloud of experience orbs, and it's on to the next lopsided bloodbath.

That example above is about how I played, but you can just as easily dress as a knight or assassin or pirate or dandy or hobo and run around punching Hobbes in the face, or gain some weight, grow a handlebar mustache and put on a pimp hat -- perfect attire for summoning the souls of the dead to fight for you. How audacious can you be? How spectacularly can you dispatch a pack of bandits? Can you kill five at once? Ten? Can you do it barehanded, with no spells, while wearing a chicken suit?

And that is just what's so fantastic about Fable II: at every step the game wants you to know just how far you outclass the common rabble swinging down from the trees or busting out of the ground, no matter how ridiculous (or intimidating) you look. Because when you finally meet a greater challenge later in the game, you have some respect for how tough those new foes are -- because that's just about how tough you are. Not that they stand a chance.