Twenty years of Game Boy. Do you know what that means? Twenty years of Tetris's domination of the universe, and another 11 years of Pokémon?'s domination of... uh, the multiverse, I guess. It's hard to look back on the Game Boy's history as altogether successful though. I mean, sure, Nintendo made millions through their crunchy old tech, but speaking as a gamer, I was mostly unsatisfied with my Game Boy. Tetris was a great game, the "ultimate proof of concept" of the potential of the device. Of course Tetris became a phenomenon tied closely to its system, much like Wii Sports two decades later. Still, after hundreds of hours of lining up blocks, you eventually have to return to the grim meathook realities of the larger game library.

And that library was mostly pretty mediocre. Even notable titles were just scaled down versions of console games. Some were good games in their own right, while others were pretty terrible. But even the good ones lacked something. They suffered in comparison to their console cousins when a direct analog was available. Super Mario Land is totally weirdnot necessarily a bad thingbut it lacks compared to its console contemporary Super Mario 3. Metroid II managed to be one of the least "Metroid-y" installments of the series. The Ultra (née Konami) games were very much smaller versions of Contra and Gradius in every sense of the word "smaller." And The Castlevania Adventure? Please.

Smack in the middle of this nonsense one of the best Game Boy games was released: Gargoyle's Quest. It wasn't based on a pre-existing franchise -- well, not directly -- and it wasn't some licensed pap. It was also released way back in 1990, so it isn't Pokémon, either.

Gargoyle's Quest was based loosely on Capcom's own Ghosts 'N Goblins series. You know those obnoxious red gargoyles who kill you all the time? You play as one of those guys. In case you're wondering, no, you are not nearly as agile as Arthur's CPU-controlled nemeses. Of course Capcom fudged some of these details by depicting the character on the box art as green, despite being named Firebrand, and later The Red Blaze. C'est la vie. While there was a connection here to an already-established series, the gameplay veered more into adventure or RPG territorycloser in style to The Adventure of Link than to Ghosts 'N Goblins.

As in Link, Firebrand's quest is split into side-scrolling action sequences on an overhead, RPG-style world map. The action sequences take place in dungeons or in random battles on the world map. You don't gain experience from these fights, but rather money with which to buy extra lives. The world map has limited exploration and towns full of NPCs who move along the plot and give you item upgrades. Even though the world map gives Gargoyle's Quest the patina of an open world, it's actually a more linear set up than Final Fantasy X?. The dungeons are usually the last element in each small "RPG" stage, and once you complete a dungeon you usually can't go back to the previous area. Never fear! The Ghoul Realm is filled with numerous five-creature settlements in which to stock up and get your password.

The random battles are quick and simple: shoot some dudes in a limited side-scrolling area. The dungeons and other special locations such as bridges are far more interesting. They provide some interesting platforming challenges and tricky bosses. (And flicker and slowdown. It was 1990, what do you want?) At the outset of the adventure, Firebrand is really weak with just two points of health, poor flying ability, sluggish speed, and weak attacks. He can't tear around like the Red Arremers in Ghosts 'N Goblins, either, but merely hovers for very short periods of time.

By defeating a dungeon sequence, you're given a new power up item, such as more life, more hover time -- up to infinite hover, eventually -- reusable healing items and different fireball shots. The different shots let you break blocks, climb spiked walls, or just plain kick ass. It's fun to overcome the variety of challenges in the levels with judicious use of your new cool abilities. Alas! You cannot return to earlier areas to explore, Metroidvania-style, with your new powers. This woeful situation was rectified several years later by the SNES sequel, Demon's Crest. 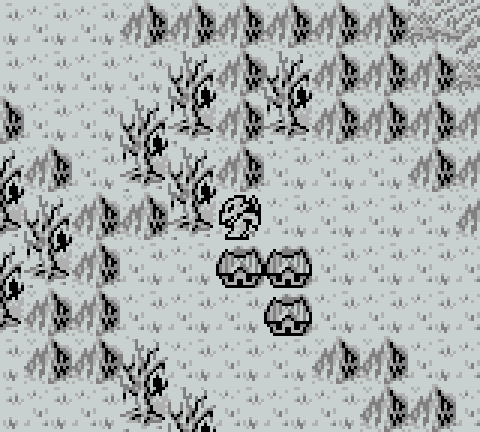 Gargoyle's Quest is also unique for its story. You playfrom the perspective of Arthur anywayas an evil monster. At the beginning of the game, you are hanging out on Earth, probably just relaxing after knocking some fool's armor off and leaving him running around hell in his boxers. Messengers from the Ghoul Realm request you return home to bust heads as the army of "Destroyers" have begun to invade. This has happened before, 1,000 years ago (natch), and you quickly rush back home. Familiar Ghosts N' Goblins characters, like other gargoyles and arremers, zombies, and dudes with additional faces in their stomachs, are all crapping their pants. So you know that these Destroyers are really bad. Plus they mostly look like they are from the Klan. Escalation! When you get to the last boss, Breager, he asks you to join him, Dragon Lord style. As in Dragon Quest?, it's not a viable option, but it's still cool. By the end of your quest, you'll have defeated the (more) evil invaders and fulfilled a prophecy. The king of the Ghoul Realm is super pleased and rewards your efforts with the gift of Earth, if you can keep it. Of course the irony of the situation is lost on all involved; Firebrand and King Darkoan do not reconsider the foreign policy of the Ghoul Realm and the cycle of violence, and sequels, continues.

OK, fine. It's not really all that unique at all. But back when stories were confined entirely to a page in the instruction manual and some truly baffling text at the end screen, this was high literature. In the 8-bit pantheon it was at least as cool as Garland being Chaos, Mario's adventures in Sub-Con being a dream (whoa, man), or Samus being a woman. Best of all, unlike today's games, it's given to you in a brisk fashion.

Even 19 years later, Gargoyle's Quest offers a great platforming/rpg adventure. It started its own sidestory franchise including Gargoyle's Quest II: The Demon Darkness on the NES, featuring a correctly coloured gargoyle on the box, and the truly sublime Demon's Crest on the SNES. This is no mean feat for a pre-color Game Boy game, making one of the few early originals worth the trouble. What trouble, you say? The trouble of buying it all in rolled pennies... a story for another day, perhaps.