The Contra series can be divided pretty neatly into three distinct eras. First came the original games, exemplified by the NES version of Contra, where the difficulty was intuitive and the level design diverse. Then came the long, dark period, first hinted in Contra III, where the pressure to deliver intense action mutated into a fetish for set pieces that looked much cooler than they were actually fun to play. (For everyone's sake, we'll chalk Contra Force and the PlayStation games up to apocrypha.) Now we have Contra 4, which brings back the substance while giving the player an active role in the spectacle.

Likewise, Game Boy interpretations of console games can be distinguished like so: those that altered the source material to play to the handheld's strengths, much like how the NES itself handled arcade games; those that attempted a straight adaptation, not mindful of the differences in hardware; and those that accurately reproduced the console experience despite those ostensible shortcomings. Now imagine Konami made a Contra game in the blissful early days of the series, executed with the elusive "best of both worlds" Game Boy design philosophy, and the result is exactly what you'd expect: Operation C.

Released almost exactly in the middle of the two-year span between Super C and Contra III, Operation C isn't the stopgap its diminutive platform might imply. Granted, it hews quite closely towards its predecessors -- and with good reason, as the structure behind NES Contra couldn't be more solid. But while it doesn't host the same kind of calculating subversions as Contra 4, it diverges from expectations with its own subtle additions. For example, the game opens in the middle of a bombed-out urban wasteland spiced with inclines, highly reminiscent of Area 1 of Super C. About halfway through the stage, though, an entirely new layout of turrets and pits is introduced, ending with a descent on an elevator while fending off aerial enemies from above -- an inversion of a scene from Super C's fourth stage. Once the lift hits bottom, the rest of the stage plays out on a series of walkways standing over water, punctuated by a boss battle with a submarine lurking in the harbor.

This technique of culling familiar sights from a number of sources, then rearranging them with completely original content indicates Operation C's design in general. Even the soundtrack sounds like it's been almost entirely lifted from the first Contra, until each melody subtly segues into a new, unique arrangement. It's comforting, but not at the expense of its own identity.

The fact that the old blends so well with the new speaks to how well a staff of just four people made the most of 1989's portable technology. The monochrome graphics are as detailed as those of an NES title, and Areas 3 and 4 even feature swaying jungle palms and throbbing organic walls, evoking the Famicom version of Contra's vivid animated milieus. The requisite waterfall cascades fluidly, and Area 1 is embellished with ocean currents drifting in the distance, which, thanks to the lack of color, double as eerie fog until you gain the visual context of the waterfront. These effects might be humble compared to what Capcom would accomplish with Mega Man IV nearly three years later, but they still stand far above the bulk of titles released across the Game Boy's long lifespan.

All too often within the confines of the original Game Boy, the sprites in portable action games tend to be either so small as to be unrecognizable (see Super Mario Land) or large to the detriment of perspective and maneuverability (as in Metroid II). In a wise acknowledgement of gameplay, Bill's sprite here is indeed smaller than on the NES, making for a perfectly comfortable character-to-screen ratio. Yet, without a direct comparison, he appears nearly identical. The game's sole graphic designer, one Koichi Kimura (who would later depart Konami for Treasure), clearly knew precisely which pixels to nip and tuck to balance faith in representation with economy of size. And this finesse fully extends to the rest of the game's visuals.

Despite its modest stature, Operation C absolutely owns a spot in the series' canon. (And by "canon," I don't mean the plot, because only people like me care about the story of Contra. I mean what's considered to be a "real" Contra game.) This is exhibited in advances that, while minor, were duly incorporated into subsequent installments, if not made standard. The Homing Gun debuts here, for instance: a three-directional shot whose individual bullets weave around the screen, seeking out targets and countering aggressors while you run ahead freely. This was the first game where you had only to hold down the trigger button for superhuman rapid-fire, trading for convenience the visceral, thumb-shredding thrill of desperately button-mashing to kill a boss before it claims your last life. It also quietly carried over the idea of upgrading weapons from Super Contra; the Spread Gun initially fires in just three directions, but a consecutive acquisition brings it up to its trademark five. What might have languished as one of many abandoned concepts from the arcade games was instead keenly separated from the chaff, preparing its return to full glory in Contra 4.

If you do want to consider the story, its central hookthat as opposed to fighting yet another army of aliens, you must stop a shortsighted militant party from reviving themhas a deliberate effect on the types of enemies you face. True, both the original game and Super C lead with robots before bringing in the extraterrestrials, but when you find the latter here,they're little more than menial grubs and face-huggers, bursting from man-made cloning tubes. Even the last true boss is a flying combat 'droid, which protects an otherwise helpless, half-formed embryo waiting to be blasted with impunity, Gradius-style. As a minimal device serving as a function of the gameplay, it's just as narrative ought to be in an action game, and it went on to be explored more ambitiously in Contra: Hard Corps's branching storyline. 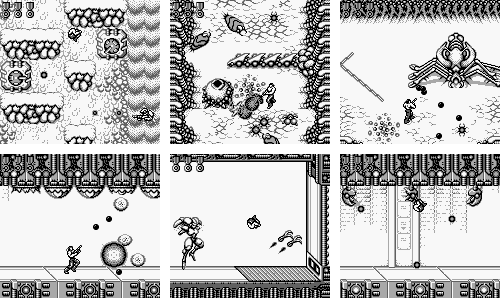 While the length between titles might give it to coincidence, Operation C was also the first game in the series to grant the player a choice from among four starting stages, as in the PS2 games and, to compare a title made by the same team, Castlevania II: Belmont's Revenge. Unlike those games, though, there's only a single stage waiting beyond the initial four. More than that, the path forward remains linear, so beating each one isn't required to access the final stretch. This means you can select Area 4 from the title screen, move on to Area 5, and finish the game right then. Almost bafflingly permissive for Contraor even for games that don't have a reputation for cruelty, in factit's no surprise that the selection menu was omitted in the Western versions of the game.

You're only given two continues to make it through all five stages, but considering the levels are brisk, replayable, and can be completed in roughly twenty minutes, the localization isn't as game-breaking as, say, the removal of Hard Corps's life meter. For the truly impatient types, there's a ten-life code reminiscent of Super C, and the original stage select can still be unlocked with a simple variation on the Konami Code (hint: add an extra "B A"). 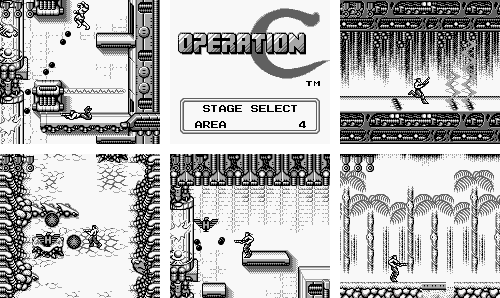 In light of the stage select, Operation C is just as notable for its innovations which weren't adopted by its successors, especially the few points in the game where behavior not conducive to Contra's ethos will yield hidden rewards. Hammering a suspiciously inanimate alien pod in Area 4 will coax from it a hidden Homing power-up, as will shooting open the one culture chamber in a certain leg of Area 5 that doesn't explode with a face-hugger. The leap over the top of the waterfall in Area 3 is the single hardest jump in the game, but if you wait by it for about twenty seconds, a small bridge will mysteriously extend across the gap, providing safe passage.

Regardless of the benefit, though, waiting just isn't something you do in a run-and-gun. And should destruction and progress be muddled by razing the scenery for Castlevania-style secrets, interactive environments could harm the pace of the mayhem. That these features are relegated to a handful of Easter eggs even in this game can probably be inferred as tacit understanding that, while novel, they wouldn't flourish under scrutiny.

But maybe that was something only the Game Boy could offer to established brands: a small, unassuming stage on which to test unproven approaches to design. Operation C is more subtle about it than the likes of Metroid II, but games as lauded as Contra and Metroid never needed upheavals in the first place. Its evolution is diversesome paths lived on, others tapered offbut behind it all lies unwavering loyalty to its origins. All it's missing is two-player co-op, but its absence is forgivable, especially since nearly everyone forgot about the link cable in the years between Tetris and Pokémon.

Operation C is neither a remake nor a spin-off; it's a direct iteration: a sequel. Disregarding the strained port of Contra III and the abortive GBA half-port of the same, it was the only real handheld Contra until Contra 4 came along. The association is becoming. 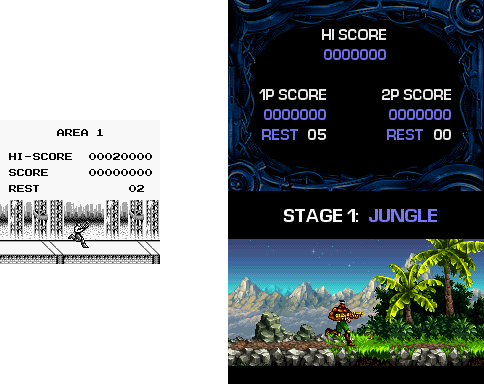 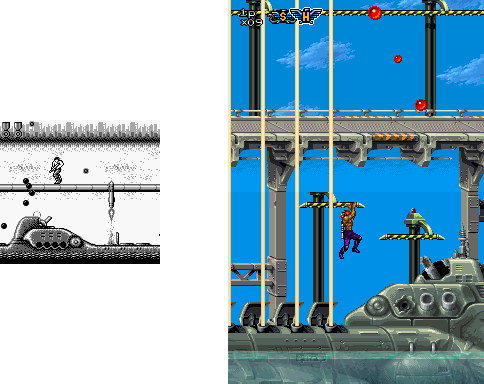 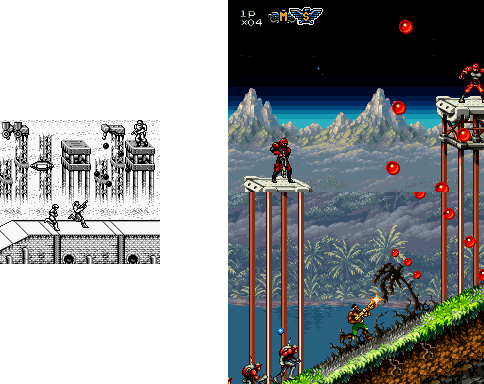 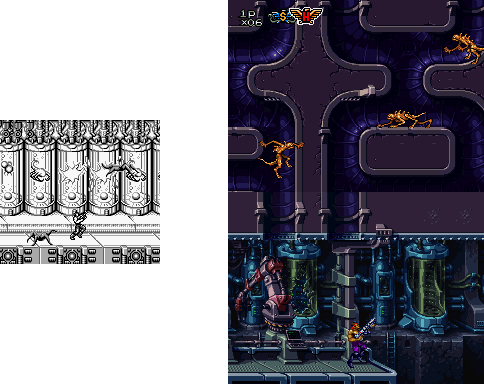 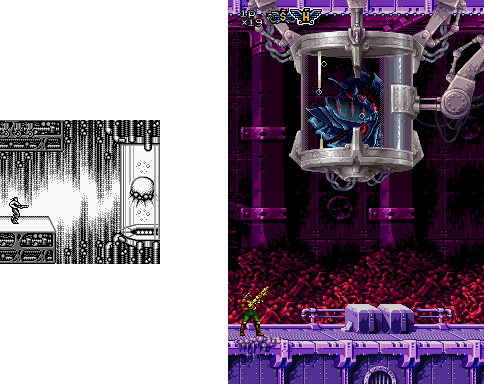