Time and poor record-keeping have obscured the true story of "Jason," the young man who put a stop to the mad ambitions of the Plutonium Boss. While there's little question that he and his advanced battle tank S.O.F.I.A. the 3rd saved humanity from "a whole lot of ugly sumbitches," the full details of his efforts remain elusive at best. Even his later life remains shrouded in uncertainty; he may or may not have undertaken a second mission, and he may even have been succeeded by his childrenthough such claims seem apocryphal at best, largely based on a timeline put forth by the controversial, discredited "historian" F.X. Nine.

Nine's version of Jason's tale indicates he was little more than an average teen living in an American suburb, where he captured frogs at the nearby pond to keep as "pets." His encounter with the Plutonium Boss is said to have begun when one such captive -- dubbed "Fred" -- broke free of the pickle jar that served as his makeshift prison and fled into Jason's backyard. At this point Nine's claims take on a completely specious tone, as Fred is said to have leapt into a box of open, exposed radioactive material sitting in the middle of Jason's backyard, instantly mutating into a massive version of himself. This newly outsize Fred then escaped into a nearby pit; Jason, heedless of life and limb, leapt after him, plummeting hundreds of meters underground to land safe and sound next to an unoccupied fighting vehicle, which he then used to undermine a hostile takeover by an underground empire of mutants led by the infamous Plutonium Boss.

The flaws and impossibilities in this account are beyond counting; suffice to say that even if suburban Americans were in the habit of storing containers of radioactive waste unguarded in the open, the effects of radiation poisoning involve blistering skin, sickness, blindness, and agonizing death; the concept of instant mutation -- resulting in unusual size with no other effects -- are beyond fanciful. Furthermore, the likelihood of a shaft in a residential backyard leading so deep underground is incredibly slim, and in any case no human could survive such a fall undamaged. Finally, there's the issue of S.O.P.H.I.A. the 3rd, a singular example of weaponized technology uniquely suited to combat the Plutonium Boss' ambitions. Why would such a device be abandoned? And how could a simple schoolboy pilot it with such expertise, let alone grasp the ramifications of the Plutonium Boss and his efforts? Even a cursory examination of Nine's tale splinters and dissolves in a cloud of illogic. 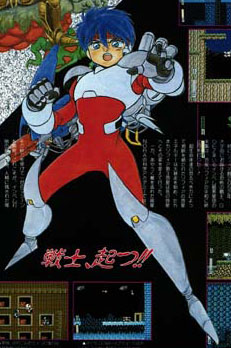 There is, however, a second possible explanation: Further research with Japanese sources suggests that Jason was in fact a member of an elite strike force called Meta Fight, groomed from childhood to be a warrior and trained to pilot S.O.F.I.A. the 3rd in a last-ditch effort to put a stop to the mutant empire's growing threat against the surface world. This version of the tale is refreshingly free of jumbo frogs (save a handful of particularly violent ones in the employ of the Plutonium Boss) and doesn't hang its narrative thread on a series of unlikely coincidences. Unfortunately, there is no official reference to Meta Fight in any available declassified government documents. However, in this case, the absence of information makes a certain sort of sense: Data on Meta Fight may be hidden because of the classified nature of its operations and the fact that the government wishes to keep the growing threat of the mutant underground under wraps. By that token, Nine's rendition of the tale is likely not so much erroneous as deliberately misleading, a work so obviously fictitious that it discredits the entire notion of Jason's battle with the Plutonium Boss, painting it as a lurid flight of fancy. This would seem to corroborate rumors that F.X. Nine is in fact an alias for a ghostwriter in the employ of shadowy powers, disseminating fiction in order to deceive, inveigle, and obfuscate.

Despite our nebulous awareness of Jason's past (and even his full identity), we know he piloted S.O.P.H.I.A. the 3rd with uncanny skill, deftly battling his way through the Plutonium Boss' legions and reclaiming stolen experimental components for his tank, which he was then able to install and incorporate into his arsenal. He was also a capable warrior on foot, though generally outmatched by the massive creatures employed by the Plutonium Boss. His other great disadvantage was the unstable nature of his handgun; it could be upgraded on the fly to more powerful forms, but would shunt its power to preserve Jason's stamina and keep him from instant death. While useful, it suffered significant power loss when its user was injured.

Yet all sources agree that Jason battled on despite these setbacks and destroyed the Plutonium Boss, sparing the surface world a terrible fate. Several records exist which allege further activity by Jason; however, these these seem spurious at best. Jason is said to have died in an act of vengeance by the Plutonium Boss' successor, leaving behind a son and daughter to take up his cause. But again, these too are unreliable claims, based on Nine's records. Whatever the true history and fate of the young man known only as Jason, few would deny that he was a genuine hero... if not exactly a friend to frogkind.