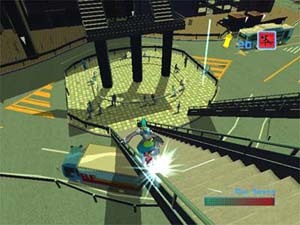 In many ways, the original Jet Set Radio? was the software equivalent of the Dreamcast itself; the game was like nothing anyone had seen before, but for the tastes of the average cornfed American, its innovations were a little too "out there," in a very Japanese sense of the term. Americans were willing to tolerate the antics of a rapping, lovesick puppy, but their quirk detectors nearly exploded when faced with Smilebit's radical, cel-shaded racing/platforming hybrid. So, much like the console it called home, JSR was misunderstood, maligned, and quickly forgotten about in an age of PS2 supremacy.

But there was a silver lining to this bad news; at the beginning of its relatively short life, Microsoft's Xbox was looking like it might become, in essence, Dreamcast Mk. II. Sega developers were hard at work bringing old franchises to the big, black ottoman of a system -- even dead Saturn series like Panzer Dragoon were slated to make a long-awaited return. The tides of time have since shown us that this might not've been the swiftest of Sega's ideas, although it seemed promising in the heat of the moment.

And I should know; during the launch of the Xbox, I worked in that bitch-goddess of a profession ("profession") known as video game retail. Staring at the store's wall of Xbox titles day after day, I couldn't shake the impression that Microsoft was trying to become the Mountain Dew of gaming -- and if not, then what the holy hell was that "X" doing there in the first place? The system's audience wanted racing, shooting, fighting, and the occasional boob thrown their way. Obviously, the weirdness of games like Jet Set Radio future stuck out like a sore thumb -- the kind of sore thumb that goes unnoticed by all and dies a slow, gangrenous death at retail.

It should come as no surprise that Sega's graffiti-sim series was no more welcome on Xbox than it had been on Dreamcast, even after it was reduced to a free console pack-in -- something fairly uncommon after the 16-bit era ended. In trying to tailor the original Jet Set Radio to the tastes of a wider audience, Smilebit managed to make a better game; but without anyone around to care about the results -- the superlative Jet Set Radio Future -- those efforts were for naught. And that, my friends, is the shame-iest of shames. 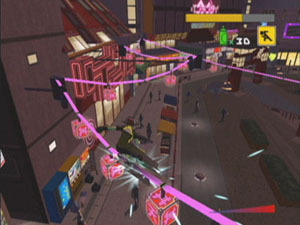 Even the best of Sega's games had a charmingly sloppy feel to them -- as if they'd been handcrafted by a ragtag team of misfits who handed things in mere seconds before the deadline -- and the original Jet Set Radio is no exception. The pure cartoon novelty of the first installment was forgivable, if only due to the freshness of the entire package; but in order to impress a new mess of gamers, Smilebit erased some of the annoyances of the original game while making the overall experience far more user-friendly. The ineffectual-but-necessary boost button of JSR -- bane of sore index fingers -- is gone in Future, replaced by making the sequel a generally faster experience; nothing was more irritating in the Dreamcast game than having to build up your speed again after a fall. Future does add a special "boost dash" move that sacrifices spray paint cans (the game's only necessary collectible) for a brief, superhuman dash of speed, but it's largely useless, and more importantly, not necessary to use outside of a few special moments in the game.

Many of the additions to Future -- some of which are too minor to mention -- are largely overshadowed by just how much easier the sequel makes the core mechanics of the game: grinding rails and jumping. The series has always been about getting from point A to point B, with the distance between said points being filled with a series of jumps, grinds, and tricky maneuvering. On the Dreamcast, Jet Set Radio could be an overly-touchy nightmare, with the short distance between life and death generally obscured by the game's uncooperative camera. While the camera still needs a good talking-to in Future -- it can't be moved on the fly without snapping it instantly behind your character in a disorienting way -- the game is generally much more forgiving when it comes to turning the city streets into your personal playground. All of this leads to a much friendlier Shadow of the Colossus?-esque experience as you initially scoff at the idea of reaching some ludicrous peak off in the distance, then soon find yourself raising two bony arms in ecstasy for having gotten there without completely shattering a pelvis. 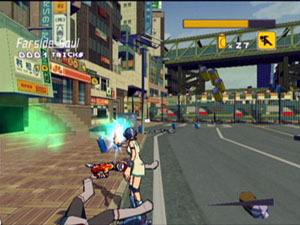 But not all of the changes in Future can be seen as blessings -- even if they do happen to make the game a lot less frustrating. The graffiti-tagging system of the original, which involved a series of complex controller commands depending on the size of the tag, has been replaced with a single-button system. Part of the original game's intensity involved working your thumb into a moist piece of beef jerky on the awful Dreamcast controller as a literal army of cops were a hair's-breadth away from clubbing you and your funky-fresh outfit into oblivion. The lack of misdemeanor-making tension in Future is lessened by the near absence of police presence in the game. Instead of an ever-increasing band of state-sponsored thugs following you through the level, the sequel reduces these encounters with authority to easy-as-cake roped-in areas where you must tag everyone harboring a stern sense of disapproval in order to progress. These segments feel like an empty gesture to reproduce the same police state sensibility of the first game; I'll admit that being taken out by tanks and snipers in JSR was unnecessarily frustrating at times, especially when it was so hard to get up and going again, but a constant police chase in Future would have been easier to swallow with the sequel's vastly-improved controls. 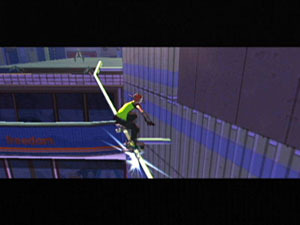 Whether you approve of the changes or not, Future is a much more carefree, open game than the original -- and to me, just a bit more fun. It would be nice to see some kind of cat-and-mouse tension in the levels, and perhaps, a bit more polish in the overall game, but Future's evolution feels like a somewhat necessary step in trying to capture the interested members of the XBox's audience. And even if this streamlined sequel left a bad taste in your mouth, we should just be happy that it happened; just a few years later, Sega was consumed by Sammy, leaving us with a wake of crusty, unplayable games that may improve if quirky new titles like Let's Tap manage to make the splash that they should. But until then, early Xbox games like Jet Set Radio Future, Gun Valkyrie, and Panzer Dragoon Orta serve as the Dreamcast's death rattle of creativity. It might have been a kind of creativity that didn't slow down the hemorrhaging of company cash, but I'll be damned if Sega's unique style isn't both unique and fondly remembered.