What separates the Shin Megami Tensei? series from most other Japanese RPG franchises is how often the player is called upon to make choices and offer opinions, which usually have significant effects on certain aspects of the storyline. The heaviest of these choices usually has to do with the players worldview and how that dictates his or her allegiances and personal ideals, usually along an axis of contrasting Law (harmony and peace as the highest ideal) vs. Chaos (freedom and personal choice as the highest ideal).

As series producer and artist Kazuma Kaneko explains, I wanted to give players freedom and a sense of responsibility when encountering obstaclesfor them to think, what would I do in a situation like this? Simply put, the player does not play the role of the main character, but is the main character himself.

This choice extends to each individual battle: For example, suppose you were playing a game and a monster appears in the middle of the road. Since this is a game, many people would decide to fight the monster. But Im sure there are others who would look for another way around the monster, others who would want to become friends with the monster, and still others who would just run away. I think the way a person decides things under different circumstances depends on his or her personality. Megaten is a game where the cumulative result of a players decisions is the creation of their own personal narrative.

That said, both in playing the games and observing others reactions to them online, Ive noticed that though you can translate the words the characters say, ideologies and philosophies dont always make the transition as cleanly. Kaneko states, The world of Megaten cant be thought of as split into good and evil. The game system uses light and dark, but we dont describe these as either good or bad, and we dont say what would make good good or bad bad. Despite the developers being careful not to present any of the options as the right way, nationality and culture mean that what were intended as value-neutral choices can be warped and slanted according to differing cultural norms.

A clear example of this can be seen in the most recent Devil Summoner game, Raidou Kuzunoha vs. King Abaddon. The central dilemma in the game stems from a double-fault situation wherein a powerful clan of assassins must continue to sacrifice their daughters to a clan of inhuman insect-people in return for the tools that ensure their status as the most feared assassins in Japan. The arrangement is loathsome to the Tsukigata clan, but to end it would mean the financial ruin of their entire remote village. The options are embodied in Akane Tsukigata, slated to be the next sacrifice, and her brother Dahn, one of the assassins. Akane is the games loose Law representative, humbly submitting to what she knows will be her personal ruin for the good of her community. Dahn, in contrast, is the Chaotic figure, willing to smash the traditional order and save his sister no matter the cost.

The player is frequently asked his or her opinion on which of the two he or she agrees with. In the game, when Nagi, an apprentice Devil Summoner learns of the goings-on, she succinctly sums it up: If Dahn stops the Marriage Ritual, then in theory, Akane wont have to be sacrificed. But the next step in that process would be the Tento Lords abandoning Tsukigata Village. Akane knows this. Its why she took it upon herself to hire you. [] Whether we should proceed with the Ritual, or allow Dahn to stop it... Which, in theory, is best for Akane?

For a player in Japan, where the game was originally developed and released, this is not an easy question. Theres enough evidence by now that Dahn may have succeeded in finding another way and the torments Akane would suffer at the hands of the Tento Lords have been made clear. Yet at the same time, putting the needs of the group before your own is valued highly in Japanese society, making it easy for them to identify with Akane as well.

In America, we value different things. The country was founded by a group of settlers who, rather than acquiesce to the will of the English crown, struck off on their own and formed a new colony where they could freely practice their chosen religion. We fought a war for our independence, and continue to fiercely protect our freedoms to speak, worship, and live our lives the way we want. For most of us, the above choice is hardly a choice at all: Akanes suffering is unjust, Dahn is right, and the ritual has to be stopped. What was to Japanese players an important test of their loyalties to one of two differing goods becomes to us a choice between doing the right thing or letting the wrong thing happen.

This may have been what Kaneko was hinting at in a 2004 interview with GMR when he said that Gods, demons, and various events that are present in the series can be thought of as metaphors for real-life social structures. The main characters in these games employ demons to fight against powerful enemies. They mature as they overcome the anxieties and anger that they feel towards society. Resistance to societys norms and growing out of adolescence... A hard rock interpretation of Pinocchio... Thats the basic style of Megami Tensei. Indeed, each demon in the Megaten games has its own alignment showing where it falls on the Law vs. Chaos spectrum, and some demons are more starkly aligned than others.

Angels and archangels, for instance, are typically the avatars of the Law school of thought. In the original Shin Megami Tensei, the lawful Mesian faction intended to build a Thousand-Year Kingdom under the supervision of the archangel Michael. An ally of the players, who has no in-game default name but is generally referred to as the Law Hero, loses his life in the struggle but is reincarnated as the Messiah and serves Michael.

Strange Journey has a similar Law Hero in the form of Zelenin, a Russian scientist on the Schwarzwelt Investigation Team. Kidnapped by demons early in the game, she develops an extreme revulsion toward the demons and refuses to use the Demon Summoning Program provided to the entire team by mysterious entities. When she meets Mastema, an angelic figure who opposes the demons, he provides her with her own angels that she is able to comfortably summon. Her relationship with Mastema and loyalty to his cause strengthens over the course of the game until she agrees to be remade into an angelic form herself to better combat the demons.

What makes Zelenin an interesting case, as opposed to the Law Hero, is her nationality and background. Though never referred to in the game, she would have grown up during a time when the state was officially atheistic, and although theres certainly a large Russian Orthodox population in the country, her scientific bent would more likely mark her as spiritually neutral. Yet its not Zelenins spiritual background but her nationalistic one that appears to have more influence over her choice of alignment. The Law ethos has a lot in common with the ideal form of Communism, in which all men are equal and serve a higher authority for the common good. Under Mastemas guidance, that authority happens to be the Lord.

The same dynamic seems to be at work with Jimenez, Zelenins opposite and the games Chaos Hero. Jimenez is a Latino American, with what are most likely Mexican roots; statistically speaking, hes more likely to come from a Catholic background. Again, however, when it comes to alignment, Jimenez is an American first and a Christian second. Whats more, hes casual, easygoing, and likeable in contrast to Zelenin, who often seems nervous, prim, and disapproving. In Strange Journey, Chaos is once again the kind of alignment the average American would have a beer with. When asked which alignment they preferred, the responses from American SMT players backed this up. Law are jerks, laughed one. It feels like they hate everyone else, where Chaos is more like, Nothing personal.

However, steps can still be taken to ensure that both sides get fair representation. When asked which side he preferred in Shin Megami Tensei: Nocturne, the same respondent said that Shijimathe in-game philosophy that closely syncs with other games Lawseemed more fair. Its not like, join us or die, more you just accept your lot and move on. The presentation of the philosophy may be a deciding factor as much as the underlying ideology itself, which may offer hope for how the Law side is presented in the English version of Strange Journey.

Ultimately, however, the question may be moot: as most SMT devotees know, rejecting both Law and Chaos is the preferable path, spurning the nationalistic and the ideological for the simply human. I believe that furthering humanitys progress and evolution will be the only way we could hope to answer that question, said a respondent, even though ultimately I dont think its a question even worth pursuing. We are here, we are now, we should make things better for ourselves.

Only from the perspective of the future, considering whether or not past expectations were met, can you decide if a resolution is correct, concludes Kaneko, and everyone carries his or her own criteria for victory. 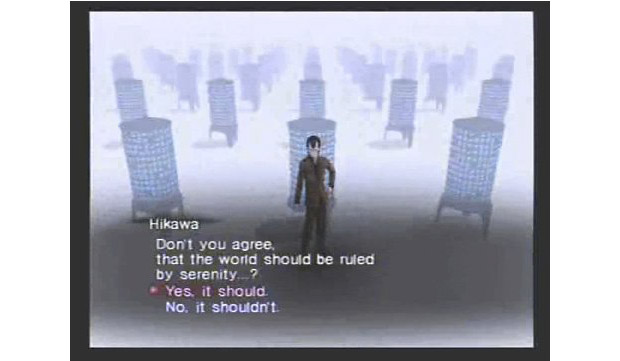